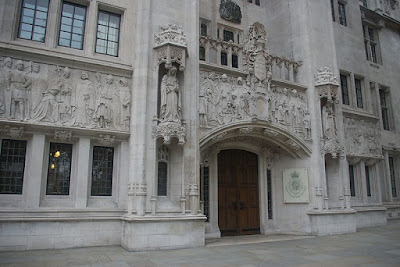 The following (initially posted on 24 July 2020) is a guide to the litigation relating to the Brexit process. I’ll update it regularly as cases develop (last updated 18 Jan 2023, sections 11 and 12; see complete list of updates at the end). For further reading, see this House of Commons Briefing Paper, which has additional details of cases and further links to judgments and commentary (although note this briefing paper is up to date to 1 November 2019).

In Miller I (24 Jan 2017), the Supreme Court, following the High Court (3 Nov 2016; see also the  contrary Northern Ireland High Court ruling in McCord and others, decided with Miller I by the Supreme Court), ruled that the decision to leave the EU could not purely be an act of the executive, but had to be approved by Parliament (see discussion here). Parliament duly passed the EU (Notification of Withdrawal) Act, which conferred upon the Prime Minister the power to notify the EU of the intention to leave.

The Prime Minister’s decision to leave the EU pursuant to a power conferred by the Act was identified and upheld in a judgment of the High Court (Webster, 12 June 2018). The court ruled that the Prime Minister had satisfied the obligations imposed by the Miller I judgment. See discussion on the Monckton chambers blog here.

A further Shindler case (Case T-541/19) argued that the date of the 2019 European Parliament election should have been delayed because of the Brexit process. This action was dismissed by the EU General Court on 29 January 2020. An appeal against this ruling to the CJEU was dismissed in October 2020 (Case C-158/20 P).

The CJEU ruled in Case C-327/18 PPU RO (19 Sep 2018; a case concerning the European Arrest Warrant, discussed here) and Case C-661/17 MA (23 Jan 2019; a case concerning the Dublin asylum responsibility rules, discussed here) that during the process of negotiating to leave the EU, the UK retained all rights and obligations of EU law. See also the judgment in Case C-340/17 on the EU trade mark pending withdrawal. The High Court ruled in February 2021 against a challenge to the loss of voting rights by some EU citizens in the UK in the 2019 European Parliament election (the 3million and others). This judgment was not appealed.

The Supreme Court ruled on 13 December 2018 on the division of powers between Westminster and the Scottish Parliament as regards the process of withdrawal from the EU (see discussion here). On 12 September 2019, the High Court of Northern Ireland ruled against a number of arguments raised by McCord and others as regards the conduct of Brexit negotiations. An appeal to the Northern Ireland Court of Appeal was unsuccessful on 27 September 2019.
In April 2021 the High Court ruled that the Welsh government could not bring a judicial review against provisions of the Internal Market Act, which regulates the trade and regulatory relationship between Westminster and devolved bodies post-Brexit. In June 2021 the Court of Appeal overturned that judgment, ruling that the Welsh government's challenge can proceed, but in February 2022 that court ruled against the legal challenge (see discussion by George Peretz).

The first extension of the UK's EU membership (see discussion here) was unsuccessfully challenged on the grounds that it breached domestic law (the Tilbrook litigation: see the House of Commons Briefing Paper, section 2.3). The third extension of EU membership (see discussion here) was based on the so-called Benn Act (discussed here), which required the UK government to request this extension if certain conditions were met. Since the government seemed to suggest that it would not comply with its obligations under the Act, there was litigation to enforce its obligations, although ultimately the government complied (see summary of the litigation here). As noted above (s 4), the EU courts have dismissed cases by UK citizens in the EU who argued that the EU should have postponed the 2019 EP elections in light of the late extension of UK membership.

A first batch of cases was brought before Brexit Day. In Walker, it was argued that the EU legislation exempting UK visitors from short-term visas after Brexit (discussed here) was invalid, on the grounds that it infringed the status of UK citizens after Brexit. An interim measures claim was dismissed in the EU General Court (Case T-383/19 P, 23 Oct 2019), and on appeal by the Court of Justice (Case T-789/19 P, 7 Feb 2020). The main case was later dismissed by the EU General Court (16 June 2020; see Twitter thread). The courts have consistently ruled that the applicants lack standing, in that UK citizens as a group (even those in the EU) do not have sufficient ‘individual concern’ to challenge EU legislation.

The second batch of cases was brought before the EU courts after Brexit Day. These comprise Case T-198/20 Shindler, Case T-231/20 Price and Case T-252/20 Silver. An interim measures request in the Price case was dismissed by the EU General Court for lack of standing (24 June 2020; for discussion see Twitter thread); the CJEU rejected the appeal in December 2020 (Case C-298/20 P). On 8 June 2021 the General Court rejected each of these cases (see orders in Price, Shindler and Silver) as inadmissible (see discussion in Twitter thread), because UK citizens lacked 'individual concern' to sue in the EU courts against the withdrawal agreement, and the decision concluding the withdrawal agreement is not a 'regulatory act'. In August 2021, these rulings were appealed to the CJEU (see respectively Price, Shindler and Silver). It should be noted that these cases, if successful, would not "annul Brexit" (see Twitter thread).

A third batch of cases raises this issue in the national courts (where the Price interim measures ruling suggested that they should be brought). Litigation was brought in the Dutch courts in 2018 (see discussion here): the first instance court referred questions to the CJEU, but an appeal court halted the litigation and it did not progress further. In spring 2020, the French Conseil d’Etat did not need to decide a case concerning the (now irrelevant) national legislation adopted in the event of ‘no deal’ (meaning, in this context, 'no withdrawal agreement'). A further case had a hearing in the Cour de Cassation in France in September 2020. On October 1st 2020 that court ruled against the arguments and refused to send questions to the CJEU. This case has now been filed before the European Court of Human Rights.
However, in November 2020 a tribunal decided to send questions to the CJEU on the EU citizenship issues, including the validity of the withdrawal agreement (Case C-673/20 - see summary of the case). An Advocate-General's opinion in this case was released on 24 February 2022, rejecting the argument that UK nationals retained EU citizenship after Brexit (see analysis here). The judgment, on June 9 2022, also rejected the argument (see analysis here). In December 2020 a second national court decided to refer questions to the CJEU (Case C-32/21). This case was withdrawn in November 2022, following the earlier judgment in the first case. In November 2022, a third case (C-716/22), about the loss of the right to vote for European Parliament elections, was referred. (The previous cases concerned the loss of the right to vote in local elections).
11         Withdrawal agreement

The EU courts have also been asked to rule on the impact of Brexit on employment contracts of a UK citizen with the EU administration (a hearing was due on 9 December 2021), and on the position of the CJEU Advocate-General linked to the UK. On the first point, the EU General Court ruled in October 2020 that a UK official who obtained Belgian nationality to stay working with the EU institutions could no longer claim a right to an expatriation allowance. He has appealed to the CJEU; an Advocate-General's opinion on the appeal (supporting his argument) was released 7 April 2022. However, the CJEU dismissed his appeal in September 2022.
On the second point, in September 2020, a judge in the EU General Court suspended the appointment of the replacement for the Advocate-General until the third case, which directly challenged the appointment of her replacement, could be heard (see discussion here). However, on appeal the CJEU overruled this suspension, and the Advocate-General was replaced. In October 2020, the EU General Court dismissed all three of the cases brought by the former Advocate-General: see here, here and here. She appealed these rulings to the CJEU in December 2020: see here and here. The Court of Justice ruled against her appeal on 16 June 2021 (see here and here).