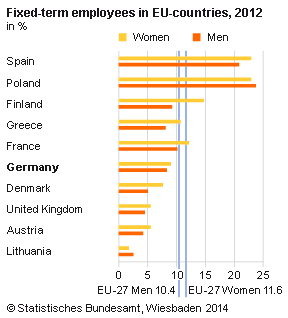 
The growth of atypical forms of work in recent years has increasingly been addressed by EU measures, in particular the social partners agreements on part-time and fixed-term work, followed by a more recent Directive on agency work. The fixed-term work rules have led to much litigation before the Court of Justice of the European Union (CJEU). However, before today the Court had not yet had a chance to address fully the key issue of the relationship between these rules and national law on unfair dismissal. Furthermore, the Court had not addressed the particular issues facing university researchers.

The fixed-term work agreement has two key provisions: a requirement to ensure equal treatment between fixed-term workers and comparable permanent workers, and a restriction on the abuse of fixed-term work contracts. The latter rule requires Member States to put in place some effective system to control such abuse, for instance by limiting the total number or duration of such contracts, or by providing for objective reasons for renewal of those contracts. Member States can also take other measures, such as providing for damages actions, but there is no obligation to ensure that fixed-term contracts must be converted into permanent contracts.

Two judgments today have addressed the application of each of these rules. First of all, in the case of Nierodzik, a fixed term worker whose contract was terminated early by her employer, the CJEU ruled that rules concerning notice periods are 'employment conditions' for the purposes of the fixed - term work agreement, and so are therefore covered by the equal treatment rule. Assuming that Ms Nierodzik could be compared to a permanent worker working for the same employer (it was left to the national court to decide this), she was therefore entitled to equal treatment as regards the notice period for the termination of the contract (in this case meaning one month notice instead of two weeks).

However, the agreement provides for a possible justification of unequal treatment. The Polish government argued that the temporary nature of the contract was a justification, but the CJEU rejected this argument, in line with prior case-law. The Court also rejected a bizarre argument that fixed - term contracts promote stable employment. Obviously, they do just the reverse.

In the second case, Marquez Samohano, the question arose whether the frequent renewal of a lecturer's fixed term contract constituted an abuse. The CJEU ruled that it did not, because national law restricted such renewals to the case of specialists, along with further conditions. However, the national court still had to decide whether the use of fixed term contracts was in fact substituting for permanent needs of the employer.

The Nierodzik judgment makes a significant contribution to ensuring stability of employment for workers with fixed term contracts. While it does not extinguish the fundamental distinction between the two forms of contract, it does mean that during the term of the fixed term contract, the worker in principle has the same protection against dismissal as a permanent worker. Logically this rule should equally apply to the rules on other aspects of dismissal, such as the grounds and procedures for dismissal, the calculation of damages for unfair dismissal, and the calculation of redundancy payments.

In practice, fixed term workers will often receive modest protection in the event of early termination of the contract, due to the short period of their employment.  However, it is arguable that if their contract has been renewed, the entire period of the successive contracts must count for the purpose of applying the equal treatment rule.

On that point, the Marquez Samoharo judgment makes it easier to justify the renewal of such contracts. This is dubious on the facts of that case, where the renewal of the contract for four years - such frequent renewals being common in the academic world - surely suggests that the renewal was indeed an indication that the fixed term contract was actually a means of satisfying the employer's permanent needs. It would have been better if the CJEU had given some indication of the factors which the national courts have to take into account when considering this issue, perhaps by analogy with the equal pay case-law.