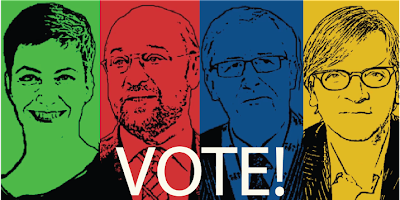 
It is highly unlikely that the next President of the European Commission will be decided by the Court of Justice of the European Union (CJEU).  Law sets the framework in which elections take place, but usually does not directly impact upon the outcome - although there are important exceptional cases to the contrary, such as the American election of 2000.

They take this view not only because of the change in the rules, but also because of the more fundamental political consideration that enhancing the link between the election to the Parliament and the Commission President selection would enhance the democratic legitimacy of the EU. Voters would be selecting the EU executive in the same way that the votes in national parliamentary elections select the executive in Member States with parliamentary systems.

However, this interpretation is not uncontested. The ECR party (technically the AECR party, in the election), which includes the British Conservatives, will not name a candidate, since it objects in principle to the link between elections to the European Parliament and the selection of the Commission President, and is running wholly national campaigns instead. The EFD party, which includes the UK Independence Party, will not name a candidate either. Moreover, Angela Merkel, the German Chancellor, does not accept any automatic link between the. EP elections and the nomination of the Commission President. Finally, the UK Labour party doesn't support the candidate chosen by the Party of European Socialists as its nominee for Commission President, although it nevertheless agrees in principle to the idea of the parties nominating such candidates.

The ECR party objects to the idea of the European Parliament elections deciding the Commission President on grounds of democraticy legitimacy, because it believes that there is no public demand for the move and that the principal method of legitimacy of EU policies should be via the mans of national governments. A detailed critique of the idea, by Heather Grabbe and Stephan Lehne for the Centre for European Reform, also objects to the proposal on a number of grounds.

It's always risky to guess the results of a political  process, but it's necessary in this case because the idea of a 'partisan' Commission President can't be judged without making certain assumptions about what will happen at the time of the next appointment. The Grabbe/Lehner paper suggests three scenarios: (a) the EP wins the argument and the largest party's candidate is proposed by the European Council without demur; (b) a deadlock between the European Parliament and European Council results over the appointment; and (c) a backroom deal is done. They were writing in October 2013, when (c) seemed more probable; in the meantime, the European People's Party looks less likely (as they had assumed) to win the largest number of seats, and is going ahead with its plan to nominate a candidate.

However, there could still be a messy deadlock. Whichever party wins the most seats in the European Parliament in the May elections will not hold a majority of the seats, due to the application of proportional representation voting as required by the EU Treaties. So for it to vote down the preferred nominee of the European Council, it will need the support of some other parties. Equally it will need the support of some other parties for its preferred candidate for President to be elected - assuming that the European Council puts that name forward in the first place. If the European Council fails to put that name forward, there could indeed be a deadlock.

Having said that, it should be recalled that the European Parliament has always sought to enhance its role in the appointment of the Commission. It began to hold hearings for nominees to the Commission even before it gained a decisive role in its appointment. And when the last two Commissions were appointed, it found a way to reject individual nominees, even though the Treaties don't provide for this. It might therefore be expected that if it comes to it, a majority of MEPs would veto any candidate for Commission President who is not the nominee of the largest party, and that the European Council will recognise reality accordingly. In effect, when it comes to appointment of the Commission President, the European Council would become the equivalent of a constitutional monarch like Queen Elizabeth II.

Is the 'election' of the Commission President via the European Parliament elections a good idea?

Just because it seems to be increasingly likely to happen, does not necessarily mean that it is a good idea. Let's look first of all at one set of arguments advanced by Grabbe/Lehne, concerning its potential effect on the effectiveness of the Commission. First of all, they argue that a 'partisan' Commission President could not do his or her job effectively, given the number of Commission tasks which require objective assessment, namely economic governance, state aids, competition, human rights and infringement actions. Secondly, they argue that a President elected via the EP elections might not be a leading political figure, and would be less able to work closely with national governments. Thirdly, he or she would be beholden to the EP, and therefore his or her initiatives would be blocked by the Council, resulting in the legislative gridlock familiar to Americans. Fourthly, given that the other Commissioners are chosen by the Member States, it is possible that the President comes from one party and the majority of Commissioners will come from the opposing political background.

The second set of arguments concern the legitimacy and democratic credentials of the notion. Here the Grabbe/Lehne argument overlaps with the ECR's explanation of its position. Both argue that the EP is remote from its constituents, and that enhancing the link with the selection of the Commission President will not change this, given that the candidates will not have wide recognition.

These are all valid arguments in principle, so let's examine them one by one. First of all, it should not be forgotten that many of the Commission's more technical tasks have been transferred to EU agencies, and that its main task remains the proposal of legislation. There are obviously political choices to be made about which legislation is proposed by the Commission, and about the content of Commission measures implementing it. State aid and competition decisions are anyway subject to objective rules and can be challenged in the courts, and the Commission's infringement actions have to be made out in court. It would be a good idea, if the Commission President were 'partisan', to establish mechanisms to ensure that the less political aspects of its decision-making are separate from its political choices. But this is not impossible: see, for instance, the separation of the European Central Bank's functions as regards (politically accountable) banking supervision from its role as an independent central bank. Anyway, the Grabbe/Lehner argument forgets that since 1999, the Commission President has already been chosen from the party which won the most seats in the EP - without any sign of contamination of the Commission's more technical tasks.

Secondly, while it seems likely that the next Commission President will not be a former Prime Minister (unlike the last three Presidents). However, this is not a guarantee of effectiveness: the most effective Presidents (Hallstein and Delors) had not been Prime Ministers, whle the least effective President (Santer) had been. This line of argument assumes that neither the Member States nor the Commission President will make any effort to work effectively with the other, but this seems unlikely. The history of the EU shows a continuing attempt to reach a broad consensus between institutions. Similarly, as regards the third argument, any Commission President is bound to know that his or her initiatives have to obtain the support of a least a qualified majority in the Council.

The fourth argument (the partisan mix of the Commission) is perhaps the strongest point. To draw an analogy, it is difficult enough for the British Conservative party to accept that it has to govern with a minority of Liberal Democrats in the cabinet. So how could a government work if David Cameron were Prime Minister, with a majority of cabinet members from the Labour party?

The answer is that the EU institutions also seek broad consensus within them. In fact, due to the different makeup of the different governments of the Member States, the Commissioners have always had a broad mix of political backgrounds. Also, the Grabbe/Lehner thesis overlooks the Treaty provisions which seek to reinforce the influence of the Commission President: the requirement of all Commissioners to work under his guidance and her ability to sack individual Commissioners. The added legitimacy of indirect election of the President would only reinforce this. Plus, as noted above, the Commission President will need the support of several political parties to be elected anyway. Finally, a more radical answer to this critique is that the EP should go further, expecting the political parties to nominate an entire team of Commissioners which would constitute the next Commission. So far, of course, this step has not been taken.

As for the argument about political legitimacy, the poll which the ECR commissioned to justify its decision not to run a candidate was very interesting. While large numbers of voters were critical of the EU's legitimacy, and were not familiar with the names of the candidates for Commission President, the bigger percentage of respondents agreed that they were 'happy' with the idea of the vote for the EP elections determining who would become Commission President, because this would make the EU more democratic. This was particularly pronounced in Poland, where the poll of Poles (I couldn't resist) indicated that 50% supported the idea, while only 19% were opposed. The idea was also supported in France, Italy and Spain, but opposed in Germany and the UK - which makes the British Conservative position (and perhaps also the UK Labour Party's contortions) understandable.  In any event, the poll suggests that many of those who think the EU lacks legitimacy would be 'happy' with the idea of enhancing that legitimacy by means of the indirect election of the Commission President. And how many people had heard of Barroso, in February 2004? Or Obama, in January 2008?

This is ultimately the decisive argument in favour of indirect election - the need to attempt to forge a greater democratic link between EU citizens and the Union. The idea certainly has its flaws, but for the reasons set out above, the existing EU institutional system can adjust to accommodate it. Those flaws are outweighed by the advantages of seizing the opportunity to take a significant step towards democratising the EU, and giving the voters an opportunity, however indirect, to (in Weiler's terms) 'throw the rascals out'. Nor does it mean that the EU necessarily becomes more centralised. In my view, the debate on the future of the EU could only have benefited from (for instance) John Major setting out the ECR's case across Europe for a less centralised, less regulated EU focussing on free trade.