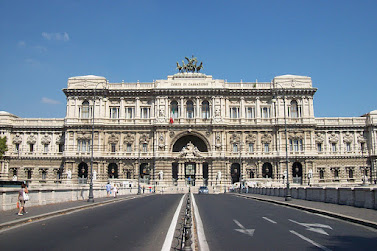 In December 2021, the Italian Court of Cassation (CoC) quashed the convictions and three-and-a-half-year sentences handed on 3 June 2020 by the Palermo court of appeal (CoA) to two men (from Ghana and Sudan) deemed the ringleaders of a protest on board of the Vos Thalassa tug boat to stop their return to Libya in July 2018. A group of 67 migrants of various nationalities was rescued from a wooden boat in distress in international waters (in the Libyan SAR zone), as communicated to the Italian maritime rescue coordination centre (IMRCC) at 15:18 on 8 July. The Libyan authorities were informed, but did not reply, so the Vos Thalassa was ordered to head towards Lampedusa to meet a support vessel. At 22:00, the Libyan Coast Guard instructed the tug boat to head towards the African coast to transfer its passengers onto a Libyan vessel, so the Vos Thalassa accordingly changed its route. At 23:34, the captain called the IMRCC requesting that an Italian military vessel be sent due to a situation of danger for the crew, following resistance from the rescued people.

The CoC’s arguments (and those of the original judgment in Trapani it upheld) contradict the strategy adopted by the EU and Member States against irregularised migration in the central Mediterranean, based on returns to Libya. A note reported the CoC’s decision in December:

“the conduct of resisting a public officer by the migrant who, rescued in the high sea and in support of the right to non-refoulement, opposes a transfer back to the Libyan state, is decriminalised”.

Hence, the threat of torture and mistreatment faced by the rescued people if they returned to Libya trumped the acts of insubordination on board that occurred when people realised where they were heading. The notion of “legitimate defence” used by the defendants to justify their actions should have been subjected to closer scrutiny by the CoA. The original acquittal noted that jus cogens norms like the non-refoulement principle and the related prohibition of torture do not allow any exceptions. This also applies when there are inter-state cooperation agreements and memoranda of understanding (MoUs) in force, like the 2017 MoU between Italy and Libya, because they are subordinate to jus cogens international law.

The CoC’s judgment has now been published. Its decision to annul the convictions on appeal centres on the CoA’s reasoning, a need to offer a “reinforced motivation” to turn an acquittal into a conviction and inadequate engagement with the original judgment. Hence, a mere reinterpretation of the facts in the case drawn from a premise that the plaintiffs, Tijani Ibrahim Mirghani Bichara (from Sudan) and Amid Ibrahim (Ghanaian), and the group they were part of voluntarily placed themselves in a dangerous situation in complicity with traffickers, is not sufficient. This approach led to convictions for committing acts to irregularly enter Italian territory by an unspecified number of “illegal migrants” [above five, a threshold for aggravating circumstances to apply] of various nationalities, who were transferred to the Diciotti military boat as a result of their conduct, before disembarking in Trapani. Further, the survivor’s use of violence and threats (including death threats and possible suicide at sea) in association with others to oppose the Italian vessel Vos Thalassa’s crew and captain, led the latter not to fulfil their duty to transfer them to the Libyan coast guard, as instructed.

The plaintiffs appealed their conviction on grounds including their designation as smugglers rather than passengers; a lack of hearings to review the decriminalisation of their conduct due to fear of return to Libya; a presumption that migrants placed themselves in danger to enter the EU illegally, perhaps after a rescue, to explain their resistance (rather than resistance to and fear of return to Libya); and that non-refoulement does not protect people’s wish to migrate as much as a subjective right recognised at the national and supranational levels. On points of law: “irregular entry” does not apply to people disembarked after sea rescues; people are shipwreck survivors rather than irregular migrants until rescue operations end, self-smuggling is not equivalent to smuggling, and a humanitarian decriminalisation norm [art.12(2) of the immigration act] applies to this case.

The second plaintiff raised issues including exclusion of the legitimate defence argument; a failure to take further testimonies; the notion that the acts in question were to enable arrival in Europe rather than to avoid return to Libya; a misreading regarding people voluntarily placing themselves in danger; misinterpretation of the risk posed by return to Libya despite available evidence; and the order to return the people on board to Libya, due to the right to be taken somewhere safe.

The CoC deemed such complaints founded. Despite states’ right to control their borders, guarantee security and punish smuggling and trafficking in human beings, human rights compel them to rescue people whose lives at sea are in danger, respect their fundamental rights and comply with the non-refoulement principle. The CoC reiterated the applicable legal framework and order of events on 8/9 July 2018, as presented in the original judgment, due to a need for “reinforced motivation” by the CoA to overturn acquittals that must address and convincingly refute the court’s findings. The judgment raised aspects including a ban on returns, refusal of entry and extradition if there is a risk of torture and/or degrading and inhuman treatment, the non-refoulement principle not admitting exceptions, also under art.10 of the Constitution (thus subordinating the Italy-Libya memorandum), Libya being unsafe and the concrete risk that caused the plaintiffs’ reaction on board.

The reinforced motivation doctrine is outlined by the CoC, including a need for exhaustive analysis of the original judgment, explanation of why it is not upheld, and the foundational reasons for the new decision. Reinterpretation of the same facts is inadequate, because errors in the first instance judgement’s assessment must be identified. The duty of rescue and to disembark people in a place of safety are established in international maritime law and in the International Maritime Organization’s (IMO) guidelines on the treatment of people rescued at sea.

The CoA should have addressed five points: a) people’s fundamental right to non-refoulement; b) definition of “place of safety”; c) what authority should have coordinated rescue operations; d) application of the 2017 Italy-Libya MoU; and e) the concrete risk of violating a subjective right. According to the CoC, these points were not adequately addressed and resolved. Regarding point e), a state’s duty rather than a personal subjective right was liable to be violated, according to the CoA, due to the plaintiffs and their fellow passengers having voluntarily placed themselves at risk to accomplish a migratory project. Regarding the “legitimate defence” argument (art. 52 of the code of penal procedure), the CoA lent weight to the idea that voluntarily giving rise to a condition of danger excludes its applicability. Hence the rebellion on board was not in defence of a subjective right, but rather, the final act of a preordained criminal conduct whose success was jeopardised by the Vos Thalassa following orders given by a competent authority to coordinate the rescue.

The CoC viewed this rationale as flawed, because the prosecuting magistrate had not doubted that the plaintiffs were not part of the smuggling ring or of the organisation of the crossing, nor was it clear what elements had resulted in this idea being deemed to have been proven, alongside having colluded with smugglers to “contrive a situation of need” [to be rescued]. The CoA was deemed to have mistaken the danger on which the legitimate defence argument was based – by drawing on an idea of voluntarily placing oneself at risk that applies in cases involving challenges, fights or duels, entirely different situations from the matter at hand. Further, the CoA assimilated the risk of sinking to the risk of return to Libya. At the time of the revolt, the first risk (shipwreck) had ended, unlike the second hypothesis which may have entailed “a risk of unfair prejudice”, the migrants’ right not to be returned to a place where they were liable to be tortured or experience degrading and inhuman treatment, thus legitimating their reaction.

Legal sources and jurisprudence were drawn upon to support the CoC’s view, including the Hirshi Jama’a et al vs. Italy judgment [ECtHR’s Grand Chamber, 2012] concerning returns to Libya by an Italian navy ship in 2009, the 1951 Geneva Convention, UN and regional human rights instruments and bodies, notes and reports from UNHCR, and the absolute nature of the ban on torture (art. 3 ECHR). Although this ban does not grant permission to enter a state’s territory, it does forbid returns to places where there is a reasonable risk that their fundamental rights may be violated, including to their “life, freedom and psycho-physical integrity”. This limit also applies in extraterritorial waters despite EU frontline states’ difficulty in dealing with flows of migrants and refugees, as the Hirshi Jama’a case established.

The next question was whether Libya was still unsafe in the summer of 2018, to verify which the Trapani court asked UNHCR, whose damning findings on this point were cited in its judgment. Despite Italy and Libya signing an MoU in May 2017 and moves to support Libyan security structures including through technical support and by developing its coastguard authority (provision of vessels), UNHCR continued to consider Libya unsafe and the Italian safe countries list adopted in October 2019 does not include the north African country. Beyond the validity of this MoU, doubted in the original judgment, its contents would nonetheless be “neutral” regarding the matter at hand, because Libya was not safe, which meant the return order should not have been issued, nor executed. Further, this order caused a real and present danger that endangered people’s fundamental rights, resulting from an unlawful conduct. The CoA is not deemed to have addressed these issues, and neither did it explain why people whose attitude had not been oppositional changed when they became aware of the situation. The CoA did not specify whether there was any alternative conduct the plaintiffs could have used to defend their rights, all the more so as they warned that they may have jumped into the sea to elude the risk they ran by drowning.

A mere description of the plaintiffs’ unlawful actions to confirm their violent and threatening nature was inadequate, according to the CoC. This was due to the “reinforced motivation” requirement, the failure to evaluate if the reaction resulted from the risk of being returned to Libya, to consider that some passengers expressed their willingness to drown to avoid that outcome and that criminal excesses like threats resulted from people’s desperation and a lack of available alternative courses of action. “Legitimate defence” to decriminalise their conduct would not have applied if the reaction had been disproportionate, but this was not the case, and the CoC also supported the original judgment’s finding that the plaintiffs and the other passengers had not colluded with traffickers.

Hence, the appeal judgment was annulled because the facts of the case did not amount to criminal conduct.