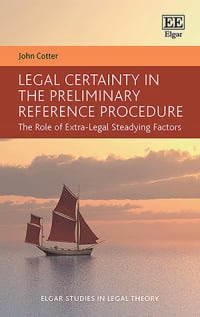 A quote most often attributed to Benjamin Franklin asserts that there is nothing certain in this world “except death and taxes”. If ‘certainty’ is to be understood in its absolute sense, the litigating lawyer attempting to forecast the outcome of a legal action might agree. There are indeed significant obstacles to ‘certainty’ for anyone charged with predicting courts. Some of these obstacles may arise from uncertainty within the rules themselves, caused by the limitations of language in communicating meaning (what I call, ‘legal obstacles’). Other obstacles may emerge from surrounding circumstances which may affect how the rules are chosen, understood, and applied to the case facts (‘extra-legal obstacles’). These extra-legal obstacles may arise from matters such as the idiosyncrasies of the individuals working with the rules, the vagaries of fact-finding, institutional pressures placed on decision-makers, or case-by-case variables like the quality of counsel.

These obstacles are arguably more formidable in the context of EU law. EU laws are translated into twenty-four official languages of equal value and are often the product of significant intergovernmental and inter-institutional compromise. The EU is also institutionally more complex than most national legal and political systems, which may expose the Court of Justice to more numerous competing, and perhaps less transparent, external pressures on its decision-making. The existence of such obstacles and their significance should be a cause for concern for a legal order like the EU’s that seeks to promote the uniformity and effectiveness of its laws throughout its multi-state territory. Legal certainty is a general principle of EU law and the Court of Justice has stated that “the effect of [EU] legislation must be clear and predictable for those who are subject to it” (Cases 212-17/80 Meridionale Industria Salumi and Others).

Given that Court of Justice rulings are a de facto source of EU law, this observation also has relevance for the Court itself. Clarity and predictability are especially pertinent in the context of the Article 267 TFEU preliminary reference procedure, through which the Court provides rulings on questions relating to the validity or interpretation of EU law referred to it by national courts. Such rulings are binding not only on the referring court, but also on courts throughout the EU’s Member States, and the procedure has played a key role in promoting a uniform and effective interpretation and application of EU law throughout the Union.

That obstacles to ‘certainty’ exist is not, however, probative of a kind of radical indeterminacy that might suggest that outcomes are wholly unpredictable. The purpose of my book is to draw attention to (perhaps neglected) factors within the EU legal order, and within the preliminary reference procedure specifically, which mitigate the obstacles to ‘certainty’. These factors are called ‘steadying factors’ and are drawn from American legal realist Karl Llewellyn’s book, The Common Law Tradition: Deciding Appeals (Little Brown 1960). Llewellyn, in order to counter any impression that American appellate court decisions were unpredictable, argued that there were fourteen steadying factors that made such decisions ‘reckonable’ (or reasonably predictable).

In chapter 2, I isolate those of Llewellyn’s steadying factors that can be applied to the Court of Justice and re-model them, dividing the factors into two categories, legal and extra-legal. I identify two factors as legal steadying factors: “legal doctrine” and “known doctrinal techniques”. However, my book concentrates on the extra-legal factors; that is, those factors outside of legal rules or principles and the limited number of interpretative techniques used to interpret them. I argue that these extra-legal factors help promote greater stability in preliminary reference outcomes in the following ways: first, by reinforcing the pressures exerted by legal rules on judges; second, by narrowing the number of conceivable outcomes; and third, by providing various signposts to a lawyer attempting to forecast an outcome. In the book, I further divide the extra-legal steadying factors into three sub-categories: internal, external, and procedural.

The internal factors, examined in Part II of the book (chapters 4 and 5), are common values, outlooks, and working methods which are (or ought to be) internalised by judges. In the book, I adopt, as a working assumption, Llewellyn’s argument that the “law conditioning” of judges – resulting from their legal education and professional backgrounds – should cause an internalised understanding of the normative quality of legal rules and more uniform approaches to interpretation. In Chapter 4, I re-model Llewellyn’s definition of a “law-conditioned official”. This recast definition is then applied to the biographical details of the past and present judges of the Court of Justice in chapter 5, revealing that 100 of the 111 judges appointed since 1952 have had twenty or more years of post-qualification experience in law after their legal educations. Examination of the biographical details of the judges also reveals a (perhaps expected) tendency for the judges to be experts in European law or to have international legal experience prior to appointment, something that should serve to diminish the impact of differing legal-cultural backgrounds on commonality of approach to interpretative problems.

The external factors, analysed in part III, are those factors which serve to reduce the impact of destabilising external pressures on judges and to reinforce the pressures established by the applicable legal rules. In chapters 6-10, I test a hypothesis – derived from Llewellyn’s “judicial security and honesty” steadying factor – that the institutional design of the EU legal order and the Court of Justice’s relationship with other institutional actors serves to promote greater stability in preliminary reference outcomes. This two-pronged hypothesis posits that an institutional independence-accountability balance ensures that: (1) the Court and its judges are sufficiently independent to make rulings which are contrary to the interests of powerful countervailing powers, but (2) are simultaneously more likely to face countermeasures (legal and illegal) where they make rulings which fail to demonstrate minimal adherence to applicable legal doctrine.

The procedural factors, discussed in Part IV (chapters 11-15), are the aspects of the preliminary reference procedure arising from procedural rules and practices that play a role in narrowing the scope of the Court’s decisional options. In this regard, six of Llewellyn’s factors are applied to the preliminary ruling procedure in the order in which they typically arise chronologically in a reference: “issues limited, sharpened, and phrased in advance”, “a frozen record from below”, “adversary argument by counsel”, “a known bench”, “group decision”, and “an opinion of the court”. The analysis in Part IV highlights the role that these factors play in confining the Court of Justice’s decisional latitude or in influencing its approach. For instance, the significance of Article 267 TFEU itself in removing the jurisdiction of the Court of Justice over fact finding in the main proceedings and confining the Court to ruling on limited questions of EU law is discussed. Moreover, consideration is given to other procedural aspects, which stymy the Court’s ability to pursue ideological agendas divorced of legal basis; for example, the division of labour in the procedure ensures that the Court of Justice is dependent on national courts for references, cannot engineer its own, and has no official method of docket control. Further, the effect of the questions referred by the national court in the order for reference in narrowing the scope of the Court’s enquiries is examined. Additionally, attention is given to aspects of the Court’s deliberative and decisional processes, such as the fact that judgments or orders are always the result of a group decision and need to be justified in a published written ruling. These latter aspects serve to reduce the impact of individual idiosyncrasies on the ruling and to place pressure on the judges to demonstrate the rigour of the Court’s legal reasoning.

The book concludes that the steadying factors analysed in the book play a role in promoting greater ‘certainty’ and consistency in the Court’s preliminary rulings by, among other things, exerting pressure on the Court to recognise the limits placed on it by legal doctrine and known accepted doctrinal techniques. These pressures, it is concluded, arise from a combination of factors such as internalised values of the judges, external accountability mechanisms, and procedural rules and practices which circumscribe the decisional freedom of the judges. While the book in no way asserts that the rulings of the Court of Justice are wholly predictable, even to the most skilled lawyer, it is maintained that these pressures at least contribute to reducing the impact of the obstacles to ‘certainty’ and ensuring that the Court is cognisant of the normative effect of the rules it interprets and applies.