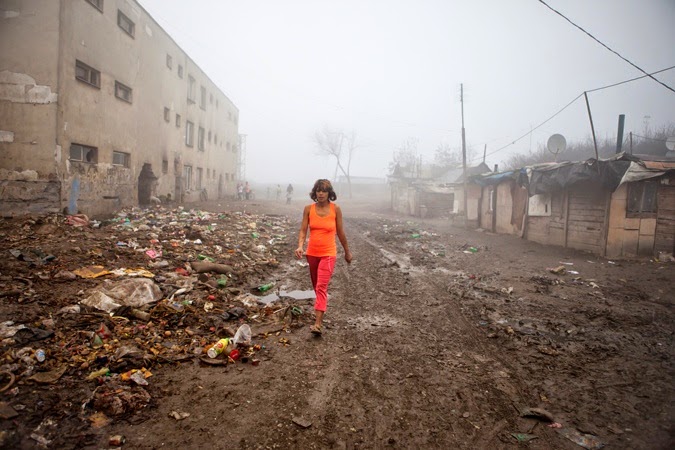 
In Luxembourg yesterday, the Court of Justice Grand Chamber heard arguments that any person who suffers adverse consequences of a racially discriminatory decision is entitled to a remedy under EU law. In a case of anti-Roma discrimination brought by a non-Roma woman, the Court was asked to clarify its Coleman ruling, concerning who has the capacity to invoke EU discrimination law. Detailed questions from the Court showed a close interest in the legal and practical issues.


Case C-83/14 CEZ is a preliminary reference of ten questions under the European Union Directive 2000/43 on race discrimination. The case comes from the Sofia Administrative Court, in an appeal by CEZ, one of Bulgaria’s three electricity companies, from a decision of the Bulgarian National Anti-Discrimination Commission. This commission had a complaint from Ms Nikolova that CEZ unlawfully discriminated against her by putting the meter for the legal supply of electricity to her grocery shop on the top of a 7 metre high pole. CEZ had not singled Ms Nikolova out for this treatment. They had done this to every meter in the district of Gizdova, but nowhere else in her town of Dupnitsa. Unable regularly to inspect her meter, Ms Nikolova considered CEZ had inflated her electricity bill. Since the Gizdova is widely seen as a predominantly ‘Roma’ area, she complained that the district had been chosen for that reason by CEZ. The commission had received numerous such complaints that only Roma districts were subjected to being publicly stigmatised as too dishonest to have access to meters. Armed with material that CEZ had cited Roma ethnicity as a factor for its decision, the Anti-Discrimination Commission agreed with Ms Nikolova and upheld her case. In her case to the CJEU she pressed for an expansive reading of EU anti-discrimination law.


This is the CJEU’s first opportunity to rule on the application of the Race Equality Directive to the Roma, Europe’s most disadvantaged minority. A previous reference to the Court on similar issues (Belov) was inadmissible, although the Advocate-General’s opinion had considered the substance of the issues.


The central issue on which the parties divided was the extent of protection under the Directive. Ms Nikolova argued - as she had in her written submissions -  that Directive 2000/43 bars all discrimination ‘based on race or ethnic origin’ regardless of the actual race or ethnic origin of the victims. The purpose of this law is to eliminate all such discrimination: it does not require the victims or the complainant to have the same race or ethnic origin as the basis for a discriminatory decision. The Commission agreed, pointing to para 50 of the CJEU’s judgment in C-303/06 Coleman where discrimination ‘based on disability’ under Directive 2000/78 was found to include adverse action against an employee on account of her disabled son.


Counsel for CEZ argued that Coleman was a case of discrimination ‘by association’. Directive 2000/43 allows leeway to states to define this term. Ms Nikolova’s shop in Gizdova is not the link to Roma origin required by Bulgarian law. The case was different from Coleman. The Bulgarian Government agreed.


Judge Prechal, rapporteur in the case, invited Nikolova’s comment on she called the ‘restrictive’ Bulgarian definition. Nikolova took a maximalist position: ‘based on’ covers any adverse decision where actual, apparent or perceived origin was in fact taken into account by the decision-maker. Only this way could the Directive eliminate all racial discrimination.


Responding on the question of comparators, Nikolova argued that where only Roma neighbourhoods are subjected to adverse treatment, the burden of proof for direct discrimination shifts under Directive Article 8. Unless CEZ then prove race was not taken into account, there is no need to consider a hypothetical comparator: direct discrimination based on race had already been proved.


CEZ denied any racial motivation: the measures had been adopted due to the problem of illegal connections to the electricity supply. Illegally constructed dwellings cannot legally be connected so users connect illegally. The costs of changing meters would be passed on to customers. No judge could determine whether a measure stigmatises Roma communities, since the notion is too subjective.


Several judges questioned CEZ on their defence. Had CEZ considered adopting the smart meter solution of other Bulgarian companies? CEZ’s counsel was not familiar with the detail but smart meters are expensive. Judge Rodin pressed CEZ:


Rodin: How does CEZ decide whose meters to put out of reach?


CEZ: A technical decision based on their engineers’ assessment.


Rodin: Do the engineers know the payment record of individuals when they make this assessment?


CEZ: No, they look at the situation of the district.


Rodin: Can the electricity consumer appeal?


Judge Borg Barthet weighed in by asking whether only Roma districts have the meters on poles. CEZ’s Counsel didn’t know. Judge Lenaerts said he would make it easier:


Lenaerts: Does this happen in many districts?


Lenaerts: In how many districts have you done this?


The Court moved to replies. CEZ’s counsel was quick, arguing that CEZ needed flexibility. When Judge Lenaerts invited him to respond to the other parties, he declined.


Nikolova’s counsel replied asking for guidance to the national court on indirect discrimination. The comparator is other districts of Dupnitsa. Differences of illegal connection rates are relevant only to the objective justification stage. They are not relevant to the question of comparator, since that would preclude the Directive addressing grossly disparate consequences in treatment. CEZ say race was no factor in their decision but claim their relevant records have been destroyed. CEZ claim’s costs of change would be too high, but has not assessed them. CEZ confirm their practice is both compulsory - no appeal - and collective – applied to the whole district, not case by case. CEZ demand flexibility but deny that to Ms Nikolova. She cannot disprove the public sign that she is an illegal connector.


The hearing began in the language of the case: Bulgarian. The CJEU President had refused Ms Nikolova’s request to plead in English as the language of her English lead counsel.  His co-counsel of the Sofia Bar therefore opened in Bulgarian. When questions began, Judge Lenaerts invited Ms Nikolova’s team to respond in English: and her English counsel pleaded the rest of her case.


Ms Nikolova is represented by the Open Society Justice Initiative through Simon Cox of the Bar of England and Wales, Yonko Grozev of the Sofia Bar, and Maxim Ferschtman of the Amsterdam Bar.