Only Nixon could go to China: Could Juncker be a reformist Commission President? 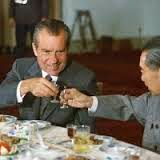 
Just as all observers of British politics know that ‘a week is a long time in politics’, their American counterparts know that ‘only Nixon could go to China’. The basic idea behind the latter catchphrase is that only a politician with a firmly established reputation could convince his or her supporters to back a significant change of course. In Nixon’s case, only a firm anti-Communist could convince American conservatives that a rapprochement with Communist China was a good idea.
Could this principle be relevant to the European Union? The most recent elections for the European Parliament (EP) resulted in an increased vote for anti-EU parties in a number of Member States. As a result, it has been argued by David Cameron and others that Jean-Claude Juncker, who is the preferred candidate to be the next President of the European Commission of the political party which won the most seats in the EP (the ‘European People’s Party’ or EPP), should not be the next President, because he is not reformist enough as he is too much of an ‘old hand’ in EU politics. But it is arguable that in fact, a policy of EU reform could only be carried out by a candidate with a good understanding of how the existing system works, and how to use it.
Secondly, it has been argued in recent days that the very idea of selecting a Commission President based on the nomination of the party which wins the largest number of seats in the EP is wrong in principle – or conversely that it is undemocratic and unprincipled. But the better view is that neither of these views is correct. Rather, the Treaty drafters created a system of dual legitimacy for the selection of the President, albeit one which provides for a greater role for the European Parliament than before.
These two arguments are developed below (in reverse order). But first, a little background for those new to the issue (given that the press has ignored it until recently).
Background
Traditionally, the Commission President was chosen by the heads of State and government of EU Member States unanimously. Over time, the national veto was removed and so the European Council (which consists of those heads of state and government) votes by a qualified majority on his issue. Also over time, the European Parliament was given the power to approve the nominee for President, although it has never rejected a nominee in practice.

The Treaty of Lisbon kept this underlying procedure intact, but refers to it differently. Now Article 17 TEU states that the Parliament ‘elects’ the Commission President. But the person which the EP votes is still nominated by the European Council, although the Treaty now also states that the latter body shall ‘take into account’ the results of the EP elections.

Following the entry into force of the Treaty of Lisbon, the majority of EU political parties (the EPP, the Socialists, the Greens, the Left party and the Liberals) decided to nominate their preferred candidate for Commission President, on the assumption that the person nominated by the largest party ought to become the President of the Commission following the elections. The persons nominated by the parties have become known as ‘Spitzenkandidaten’. It was never clear, however, whether the European Council would accept this process.


The procedure for selecting the Commission President
In a previous post on this blog, written before the elections, I argued that despite some cogent arguments against the idea of the Spitzenkandidaten, in principle the idea should be supported as a move towards greater democratisation of the EU.

Let’s revisit the argument in light of the post-election furore, in which there are competing contentions (as mentioned above) that only a predominant role for the European Council, or for the European Parliament, would be democratic. Neither of these views is convincing.


On the other hand, the Treaty drafters not only retained the role of the European Parliament, but enhanced it, adding references to its role ‘electing’ the President and the requirement for the European Council to take the election results into account. If the Treaty drafters had not wanted to enhance the role of the EP, they would not have made these amendments. The best view is therefore that, as before, both institutions play a significant role in the appointment of the Commission President – but the EP, rather than the European Council, plays the lead role in that process.
Secondly, the broader political arguments. Asserting that either the EP or the European Council should be regarded as the sole or main source of democracy in the EU is risible. They both have democratic legitimacy – as expressly recognised by Article 10(2) TEU, which refers equally to the direct representation of citizens in the European Parliament and their indirect representation, via national parliaments and governments, in the European Council (and the Council, made up of national ministers).
This dual legitimacy is reflected throughout the EU legal order, in the form of the ordinary legislative procedure, the annual budget process, the European Parliament’s power of consent over a number of Council acts (for instance, most treaties to be concluded by the Council), and the power of either the EP or the Council to control delegated acts to be adopted by the Commission. In some cases (for instance, tax legislation), the Council has greater power than the EP, but sometimes the reverse is true (for instance, only the EP can force the resignation of the entire Commission; this is clearly consistent with an increasing role for the EP in appointing it). It logically follows that only a Commission President who commands broad support from both the European Parliament and the Member States can do the job effectively.
But what does all this mean in practice? It means that the increased role of the EP in the election of the Commission President ought to be respected. So the European Council ought to consider, first and foremost, the name of whichever of the Spitzenkandidaten could possibly command a majority of Members of the European Parliament (MEPs). The first such name is Juncker, given that his party got the biggest number of seats and a large majority of EP parties have already supported the idea that he try to obtain a majority in the EP first.


However, as the EU system currently stands, the European Council should not be expected to approve this name without further ado, but should retain the right to ask the candidate to make specific commitments in order to satisfy the broadest possible majority of Member States that he or she should be appointed.
In particular, in light of the increased vote for anti-European parties, it is more than reasonable to expect the next Commission President to commit himself or herself to significant reform of the EU. The question is therefore whether Juncker, described by some as a federalist supporting greater European integration, is the right person to carry out that reform.


Can Juncker be a reformist?
The starting place for assessing whether Juncker can be a ‘reformist’ Commission President is his own list of five priorities. These include a commitment to discuss a possible renegotiation of UK membership of the EU, referring expressly to David Cameron’s own list of demands (which were discussed in an earlier blog post). At the same time, another Juncker priority is a bigger role for the EU, in relation to monetary union – but as regards the Eurozone Member States only, specifically exempting the UK.


Another Juncker priority is the completion of negotiations (already underway) for a free trade deal between the EU and the United States. This prospect is increasingly controversial (at least in the EU), although it is hard to judge its merits at present without having any idea what the final deal will consist of. However, the idea of such a deal appears to have broad support across the UK’s political spectrum. If it is agreed, it will confound the argument of those who say that the UK needs to leave the EU in order to increase its trade with non-EU countries. But if it is not agreed, then those arguments will be confirmed, at least in part (the EU has negotiated, and is negotiating, free trade deals with many other countries).
Admittedly, Juncker’s list of priorities places qualifications on his support for an EU/US free trade deal, in particular as regards food safety and data protection laws. But reservations like these are shared in a number of national capitals and parliaments and among a number of MEPs. They must be addressed if any trade agreement is to have any chance of being ratified. A more evangelical and uncritical supporter of an EU/US trade agreement would perhaps not be able to persuade as many governments or parliamentarians to support the final deal. In particular, the European Parliament might now contain more MEPs who oppose a potential deal, but Juncker, as the first ever Spitzenkandidate to take office, might be best placed to convince them to support it.
Juncker’s other two priorities concern growth-related policies such as the digital single market, and an energy union for the EU. Both these ideas have broad support across the EU and are not specifically or necessarily federalist. Indeed, the development of the EU’s single market has always been at the forefront of the reasons for the Conservative party’s support of the EU.
So Juncker’s priorities are not as federalist as has been suggested, and already include some elements of reform. Certainly, more reform is needed: the next Commission should ensure that the EU is more transparent, devolves more power to Member States where there is a good case for this, and addresses other public concerns.
Therefore, the European Council should request specific commitments from Juncker on these sorts of issues. But it should not be forgotten that the Commission President will not be the only beast in the EU’s political jungle. Any proposed legislation will still have to be agreed in the EP and the Council. More broadly, Member States set the broad political direction of the EU when their leaders meet in the European Council, and have full power to appoint the President of that body (Herman van Rompuy cannot be reappointed to that job after 1 November 2014).
And political innovations are always possible. For instance, the European Council could set up a high-level body, including (for instance) Tony Blair and Nicolas Sarkozy, to report back in the near future with a list of specific recommendations on reform of the EU. Juncker could be asked to commit to a strong role for a (British?) Vice-President of the Commission in charge of the reform process. More specifically, it might be useful for the European Council and the EP to agree a set of common rules, in the form of a joint statement or inter-institutional agreement, as regards their respective roles in the process for selecting the Commission President.
For an EU reform policy to work, a Commission President with stronger links to the European Parliament might have a better chance of seeing policies supported in that institution, and an ‘old hand’ at EU politics will know more about how to get things done in practice than a newcomer. Juncker is the only candidate who has both strong links to the EP and intergovernmental experience. The current controversy over his potential appointment could be resolved if his critics could acknowledge that indeed, only Nixon could have gone to China.