Is the European Union an ideal worth dying for? Thoughts on the future of Ukraine and the EU 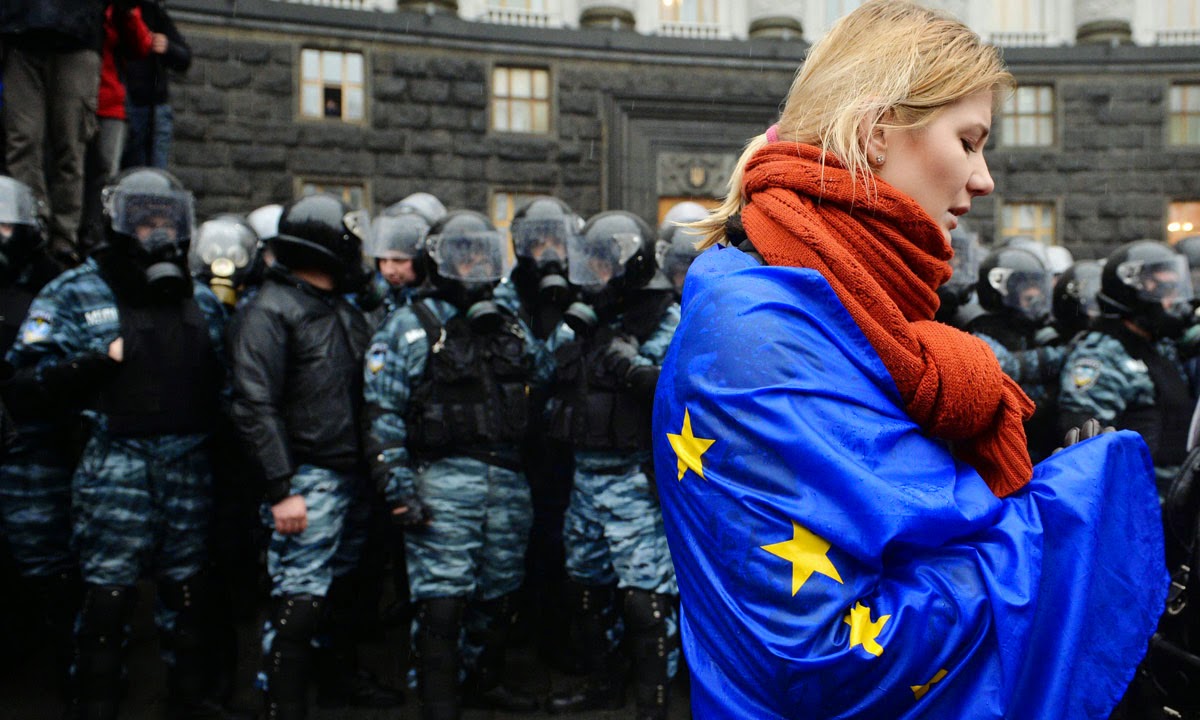 
Undoubtedly there were many reasons to find fault with the Yanukovych government of Ukraine, but the catalyst for start of the protests which ultimately brought his government down was his refusal to sign an association agreement with the European Union. Some of the protesters killed last week were even flying the Union flag. Let's assume that fresh elections are held, as planned, in the near future (on the same day as the European Parliament elections) and result in a pro-European government. In that case, this apparently strong enthusiasm of a proportion of the Ukrainian population for joining the European Union will raise fundamental questions about the Union's future.

The initial steps following the election will be relatively easy. First of all, the association agreement will be quickly signed and ratified. This treaty goes much further to link Ukraine to the EU's legal order than the prior Europe Agreements (with Central and European countries) did, and the current Stabilisation and Association Agreements (with the Western Balkans) do. In particular, it contains an enormous list of specific EU laws which Ukraine must comply with by certain dates.

Another potential 'early harvest', which would be very popular with the Ukrainian population, would be the abolition of the visa requirement for Ukrainians to visit the EU. There is already a process to this end set up between the EU and Ukraine, and it could certainly result in a successful result in the near future if there is enough effort on the Ukrainian side - as the examples of the Western Balkans and Moldova prove. Various other treaties on specific issues could also be agreed between the EU and Ukraine. Yet I doubt if this will be enough.

The Copenhagen and Thessaloniki declarations, which set out the EU's clear willingness to admit the countries of (respectively) Central and Eastern Europe and the Western Balkans if the relevant conditions are met, have formed the core of the EU's relations with the countries concerned since their adoption. The realistic promise of EU membership for these countries formed the basis of broad and stable political support for widespread economic and political reform.Of course, in some cases, the promise of possible EU accession is not enough to overcome a country's manifold problems, as the example of Bosnia and Hercegovina shows. But it is hard to see how that country would be better off without that promise.

Indeed, the recent history of Ukraine arguably shows that the absence of a commitment by the Union to admit the relevant country in principle potentially weakens the pro-reform forces politically. Following the Orange Revolution of 2004, the EU would not commit to possible enlargement, suggesting instead the close association agreement which has since been negotiated, and pro-reform forces faced difficulties ever since. Of course, the EU's lack of enthusiasm for Ukrainian membership cannot have been the only reason for those difficulties. But again, the pro-reform forces would surely have been better off if that commitment had been made. You cannot build broad and stable political support for widespread economic and political reform around the goal of EU membership when the EU palpably doesn't want your country to join.

So this time, should the EU make a genuine commitment to admit Ukraine if the conditions are right? On the one hand, Ukraine fits the geographic criteria for membership, and has various historical, cultural and linguistic links with current Member States. It's very diverse, and its borders are historically arbitrary, but the same could be said of other Member States (and non-Member States too). If the political and economic circumstances there change, the potential accession process could always be put on hold for as long as necessary, as it has been in Bosnia and Hercegovina. Its accession would be of major strategic importance for the EU, significantly limiting Russia's sphere of influence in Europe.

On the other hand, the Union's elites and its population clearly have 'enlargement fatigue', and Ukraine is bigger, poorer and potentially more volatile than most of the countries which have joined in recent years. The weeks leading up to a European Parliament election are not an ideal time for politicians to consider making such a brave political commitment.

How can these conflicting considerations be reconciled? The Union has gone as far as it can in terms of developing a close association with Ukraine, in the form of the association agreement which will likely soon be signed. More protocols could be added to this treaty, but that would miss the point: pro-reform forces in Ukraine need a concrete commitment to EU membership as an anchor to build broad support for a significant programme of political and economic reform.

What the Union needs, then, is not a new form of association: it is very good at coming up with them, but that won't be sufficient in this case. What it needs instead is a new form of membership. Let's call it 'associate membership' (although that term is bound to be confused in practice with mere association) for convenience's sake.

An associate member would be legally a member of the EU, with many of the rights and obligations of EU membership, but not all of them. For instance, addressing one of the biggest public concerns in current EU Member States, the free movement of people would not fully apply. This is different from the transitional period for free movement of workers that has applied to many EU enlargements, in that there would be no fixed end date for the limitations concerned. Indeed, there would be no legal commitment to admit the country concerned as a full member of the EU, leaving that possibility subject to the current system for agreeing accession of new Member States.

This new possibility need not be confined to Ukraine: it could also be used for Western Balkan states, Turkey and other eastern neighbourhood countries. Indeed, it could also be used for existing Member States which may wish to scale back their current degree of membership in the EU without leaving it altogether. The United Kingdom would be the most obvious candidate for such a change of status, participating perhaps in a 'common market' version of associate membership.

Of course, the associate members could not expect to vote on EU measures which did not apply to them yet (again differentiating them from new full Member States), including any Treaty amendments that did not apply to them. Difficult issues would arise as regards their participation in EU institutions, but these could surely be solved if the political will were present.

Undeniably, this new form of EU membership could only be introduced by way of Treaty amendment, and many Member States dread starting the Treaty amendment process. But, if the political will were there, it would need only a minor amendment to the Treaties to provide for the existence of the new concept, with the details to be worked out in the treaties with the countries concerned, supplemented perhaps by a general legal framework governing the new form of EU membership (to be adopted by the Council or European Council by unanimity, with the consent of the European Parliament). This Treaty amendment could be severed from other possible Treaty amendment issues, reducing the political difficulties in negotiating and ratifying Treaty changes.

Back in 1989, the European Union responded quickly and fully to the end of the Cold War, putting in place a framework for enlargement that ultimately led to the reunification of much of the continent within the EU's legal order. The passion and enthusiasm of pro-European Ukrainians, as well as the Union's need to think creatively about ways to address its relative decline of influence in regional politics, suggest that the time is ripe to create a new form of membership in the European Union.