Want to be an EU citizen? Show me the money! 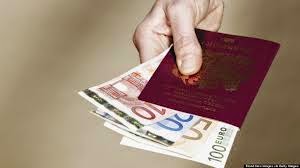 Give me your rich, your bored,
Your pampered mistresses shopping duty-free,
The randy playboys through our open doors.
Send these, the chinless, party-goers to me,
Come flash your cash inside our finest stores!


We can only imagine whether Emma Lazarus, the author of the famous poem inscribed on the Statute of Liberty, would indeed have adapted her poem thus, in light of the sale of Maltese nationality (and hence, citizenship of the European Union) circa 2014. However, putting parody aside, are there any constraints deriving from EU law on Member States’ rules on the acquisition of EU citizenship, and if so, what are they?

The starting point is the judgment in Micheletti, in which the Court of Justice of the European Union (CJEU) stated that ‘'[u]nder international law, it is for each Member State, having due regard to Community law, to lay down the conditions for the acquisition and loss of nationality’ (emphasis added).

What limits are set by the phrase ‘having due regard to Community law’? In Kaur, the CJEU ruled that the United Kingdom was free to refuse to grant full British nationality to one of its quasi-citizens holding a special form of ex-colonial legal status, mainly because these rules were among the ‘conditions of accession’ of the UK to the Communities in 1973. ‘Furthermore’, the UK’s declaration to this effect did not deprive anyone ‘of rights to which that person might be entitled under Community law. The consequence was rather that such rights never arose in the first place for such a person’.

However, in Rottmann, the Court ruled that there were some constraints upon Member States’ rules upon the loss of their nationality, deriving from the existence of EU citizenship. The Court began by quoting the Council of Europe’s Convention on Nationality, Article 3:

‘1. Each State shall determine under its own law who are its nationals. 2. This law shall be accepted by other States in so far as it is consistent with applicable international conventions, customary international law and the principles of law generally recognised with regard to nationality.’

So international law (although Malta has signed, but not ratified, this Convention) gives States the power to determine who their citizens are, and requires other States to accept that decision in principle, with caveats (as regards the latter rule) about international law. If we could end our analysis here, the answer to the question posed above would be simple: Malta could sell its nationality.

But the answer is not simple, because, as a matter of EU law, the rules of public international law on nationality are not fully applicable. First of all, in Micheletti and subsequently (see Chen and Zhu), the CJEU stated that EU law establishes a rule of pure mutual recognition of Member States’ nationalities. In other words, the international law exceptions set out in Article 3(2) of the Council of Europe Convention do not apply. It must follow that, since Member States are obliged to recognise each other’s nationalities, they have at least some interest in what other Member States’ rules on nationality are – limiting the application of Article 3(1) of that Convention.

Let’s return to Rottmann. In its judgment, the CJEU then mentioned declarations and decisions of Member States to the effect that the acquisition and loss of nationality was purely a matter for national law. But the Court then stated baldly that: ‘Nevertheless, the fact that a matter falls within the competence of the Member States does not alter the fact that, in situations covered by European Union law, the national rules concerned must have due regard to the latter’. EU law applied to a national decision on the loss of Member State nationality, because it caused the person concerned to lose his status as an EU citizen.

The Court then explained the application of EU law to Member States’ nationality law as follows: 'The proviso that due regard must be had to European Union law does not compromise the principle of international law previously recognised by the Court…that the Member States have the power to lay down the conditions for the acquisition and loss of nationality, but rather enshrines the principle that, in respect of citizens of the Union, the exercise of that power, in so far as it affects the rights conferred and protected by the legal order of the Union, as is in particular the case of a decision withdrawing naturalisation such as that at issue in the main proceedings, is amenable to judicial review carried out in the light of European Union law (emphasis added).'

The Court then distinguished Kaur, as it concerned a person who had never had EU citizenship, rather than someone (like Mr. Rottmann) who had it and lost it. It then indicated that EU law could accept the idea that nationality of a Member State could be lost due to deception, subject to the principle of proportionality. Finally, it hurled this hot potato back to the national courts, which were left to apply these principles to the facts of this case.

What can we derive from Rottmann? While the case concerned the loss of EU citizenship, we cannot conclude necessarily that EU law has nothing to do with its acquisition. The crucial words ‘in particular’ indicate that EU law might impact upon that topic too. While Kaur did concern the acquisition of nationality, it can be distinguished from the Maltese case because it concerned the refusal of nationality, not the grant of it. While refusal of nationality does not impact directly upon other Member States, the grant of that nationality (and therefore EU citizenship) does.

Having said that, Rottmann does indicate that prima facie EU law does not set very tight constraints on Member States’ nationality laws. But the outright sale of citizenship arguably bursts through even this loose corset. While the Court of Justice might be willing to accept extensive variants of the jus soli and jus sanguinis principles fro acquiring the nationality of a Member State, would it be willing to accept the principle of jus argentum? We cannot be certain until the Court of Justice is seized of the question; but we can hardly be sure that it would.

*For an alternative view, see Dimitry Kochenov, ‘Citizenship for Real: Its Hypocrisy, Its Randomness, Its Price’, at http://papers.ssrn.com/sol3/papers.cfm?abstract_id=2385340