Enforcing Previous Judgments of the Court of Justice 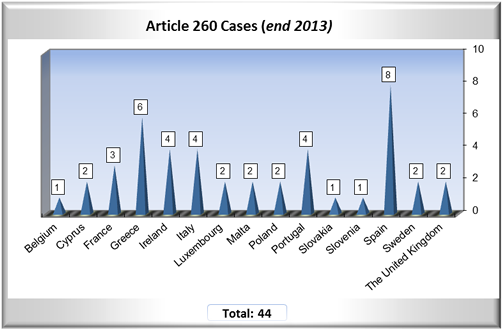 
The Court of Justice of the EU (CJEU) has recently delivered an interesting judgment concerning the so-called 'infringement procedure', which is the system for enforcing EU law directly in the EU courts. This system runs in parallel to the process of enforcing EU law via the national courts (see the previous post). The details are set out in Article 258 of the Treaty on the Functioning of the European Union (TFEU), which provides that the Commission can bring actions to the Court of Justice against Member States which have allegedly breached EU law.

But what happens if Member States do not comply with those rulings? There might be follow-up in the national courts. Also, there is a process, set out in Article 260 TFEU, for the Commission to bring a further action to the Court of Justice against a Member State which has not implemented an infringement ruling against it. If the Court of Justice agrees with the Commission, it may impose a lump sum and/or a penalty payment against that Member State. The penalty payment is charged at regular intervals, for as long as the Member State has not complied with the original judgment. For more on this, see my 2012 article in European Public Law.

Once the Member State has indisputably complied with the original judgment, or is indisputably not complying with it, its liability to pay the penalty payment or not will be perfectly clear. (There might be issues if the Member State refuses to pay the sums due, or if the Commission waives that Member State's obligation to pay, but let's leave them aside). But what happens if there is a dispute about compliance with the original judgment? The Member State in question is arguing that it has now fully complied with the judgment, but the Commission is arguing that it has not.

This sort of problem is not unique to EU law: some may remember one twist in the 'banana saga', when the EU claimed that it had complied with rulings of the World Trade Organisation (WTO) against it, while the USA claimed that it had not. In the absence of clear rules in the WTO's Dispute Settlement Understanding on this point, the WTO bodies had to craft an ad hoc solution.

Equally there are no clear rules governing this scenario in EU law, so the EU General Court had to craft them back in 2011, when Portugal argued that the Commission had wrongly sent it a demand for a penalty payment, whereas it had already complied with the original judgment against it, which concerned its breach of an EU Directive on public procurement (Case T-33/09 Portugal v Commission). The General Court agreed with Portugal, ruling that in this scenario the Commission could not simply demand more penalty payments, but had to begin a wholly new infringement procedure from scratch.

The Commission appealed this judgment to the Court of Justice (Case C-292/11 P Commission v Portugal), but in its judgment that Court upheld the General Court's judgment. In the Court's view, the obligation for Portugal arising from its case-law was to repeal a particular law, and Portugal had done so. There was a replacement national law, which the Commission claimed still violated EU obligations, but the Commission had to bring new infringement proceedings from scratch to establish that this was a breach of EU law.

The first reason for the Court's ruling was that it had exclusive jurisdiction to rule on whether a Member State had breached EU law. Neither the Commission nor the General Court could encroach on this jurisdiction. It would also be problematic because the Court of Justice would be limited to reviewing the legal conclusions of the General Court, being unable to examine its findings of fact.

The case-law of the CJEU is often criticised, sometimes justifiably, for prioritising the effectiveness of EU law above all else. But with great respect, this judgment can be criticised for exactly the opposite reasons. It simply makes it too easy for a Member State to replace a national law which breaches EU law with a new law which breaches EU law nearly as much as the old one (I am assuming that the judgment would not apply if the new law had exactly the same content as the old one, for that would be truly absurd).

If a Member State does this, the Commission can no longer collect penalty payments, unless it can establish the breach all over again by bringing proceedings again under Article 258 and then Article 260. And when this second round of proceedings concludes years later, what is to stop the Member State making another small change to its national law, compelling the Commission to start Article 258 proceedings a third time if it wishes to (re-)establish the continuing breach?

The Court never examines the issue of effectiveness, although the Commission had raised it. As for the reasons which the Court does give, it can't really be said that the Commission or General Court would be encroaching upon the Court of Justice's exclusive jurisdiction as regards infringement proceedings, since such a case would only arise in the first place after a first round of judgments under Articles 258 and 260.

Nor is it convincing to argue that Member States' procedural rights would be impinged: they could exercise those rights in full when the original Articles 258 and 260 proceedings were brought, and they would have the right to challenge a Commission decision declaring that they were still in breach of the original judgment of the Court of Justice.

Much of the Court's concern is jurisdictional, and so would be addressed if jurisdiction over infringement proceedings were transferred to the General Court. There would be no need to amend the Treaties in order to do this; an amendment to the Statute of the Court of Justice, which can be adopted by means of the ordinary legislative procedure, would suffice.

Of course, such a change in the EU's judicial architecture is undesirable as long as the General Court is overworked. Yet its workload could be alleviated if more judges were appointed to it. The Court of Justice has suggested this, but its proposal is blocked in the Council, due to squabbles about which Member States would get the extra judges. So perhaps there is a 'hidden agenda' to this judgment?