The German Constitutional Court and the European Arrest Warrant: The latest twist in the judicial dialogue 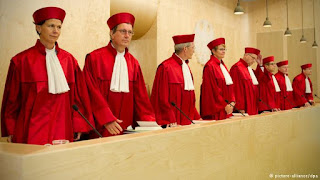 Daniel Sarmiento, Professor of EU Law at the University Complutense of Madrid*
The German Constitutional Court (GCC) has fired again, and now in the always sensitive area of fundamental rights. In an Order published yesterday, the GCC has undertaken an “identity control” over the implementation of a European Arrest Warrant (EAW) issued by Italian authorities and intended to be executed in Germany. The person concerned, a US national convicted in Italy in absentia, claimed that his conviction had been ruled without any guarantees, and now, under Italian law, nothing can stop the enforcement of his conviction. Italian procedural law does not provide a remedy at this point.
The GCC has applied, for the first time, its “identity control” to a case fully covered by EU Law. Therefore, the review by the GCC of the challenged judgment, which implemented the Framework Decision and the German implementing act, entailed an indirect review of the Framework Decision itself. The GCC reminds the reader of its traditional case-law on “identity control” and comes to the conclusion that in this particular case it is perfectly possible to do it. In the end, it quashes the decision of the instance court but it states that the Framework Decision and the German implementing act are perfectly in line with the solution it comes to.
I completely agree.
The trial in absentia that took place in Italy was clearly in breach of Convention (ECHR) rights, because the accused had not been informed of the date of the hearing, he was not represented by a lawyer, etc… In other words, the trial was a mess. This contrasts with the facts in the case of Melloni, in which the CJEU ruled that the Spanish Constitutional Court could not apply the higher standards of its national constitutional law in order to block the execution of an EAW issued by Italy. On that case, Mr. Melloni had been sentenced in absentia but scrupulously following the minimal conditions required by the Convention. The case before the GCC is a good example of how not to handle a trial in absentia. Therefore the Framework Decision entitles Member States to refuse the enforcement of decisions enacted under such terms.
Therefore, what is the fuss? Why has the GCC made an “identity control” when the Framework Decision solves the case anyway in the same terms?

It seems as if the GCC is sending a message to Luxembourg: it is not willing to buy the Melloni case-law. Therefore, the Court of Justice’s approach in that case to Article 53 of the Charter, which imposes Charter levels of protection in cases totally determined by EU Law (i.e., with no discretion for Member States), is not going to be an easy ride. The GCC is clearly stating that it will undergo “identity control” in any case covered by EU Law, including in areas totally determined by European rules that lower the levels of protection enshrined under national law.
Therefore, it is a harmless judgment on the facts, but a very important one on the symbolic side. In fact, the decision is perfectly in line with the decision of the Spanish Constitutional Court in Melloni, in which the Spanish court decided to lower the domestic level of protection of the right to a fair trial, but not on the grounds of EU Law. The Spanish court highlighted that the judgment of the Court of Justice in Melloni was “a very useful reference”, but not a binding decision. In the end, the Spanish court followed the Luxembourg criteria, but on the sole grounds of the Spanish Constitution. Now the GCC is saying pretty much the same thing, but through the sophisticated means of “identity control”.
This is an unsurprising turn of events. Constitutional Courts have been protagonists of the fundamental rights narrative for more than half a century in Europe. In the case of Germany, Spain, Portugal or Italy, Constitutional Courts have been the guardians of human rights in States with a dubious past track-record in this matter. These are therefore powerful and relevant courts with an important tradition, and they are not willing to step back. European integration is side-lining them, but the events taking place in Europe (and everywhere in the world) are so serious that Constitutional courts feel a duty to keep acting as guardians. This attitude might be interpreted as a sign of nationalism, but it can also be the confirmation of the importance of the issues being now handled by the EU: data protection, the fight against terrorism, immigration, the euro and financial assistance of Member States, etc… Why would these courts decide to become irrelevant now, at a time in which the challenges ahead are as relevant or even more important than those they have faced in the past?
In my opinion, this should not be a cause of concern, but only as long as the Court of Justice handles the situation with care and intelligence. It did a good job in the OMT case (discussed here), but it is obvious that the area of fundamental rights is a thorny one that poses many challenges. Akerberg Fransson and Melloni were a brave but risky start, shortly followed by some cautious decisions. However, Opinion 2/13 and the inability of the Court of Justice to adjust to a future ECHR accession of the EU, including Strasbourg external control, is a damaging and clumsy move that has only made Constitutional courts frown. If they are subject to Strasbourg control, why can’t the Court of Justice accept it too? Many Constitutional Courts are perfectly entitled to think “what are they scared of in Luxembourg?”.
It will not be easy for the Court of Justice to come out of the situation created by Opinion 2/13. However, the Charter is still a very valuable instrument, a source of endless inspiration that could help the Court seduce national Constitutional Courts in the years to come. Also, the current events taking place in Poland are another good opportunity for the Court of Justice to prove how far it is willing to go in assisting national Constitutional courts that come under attack. The current situation is a difficult one, but the Court of Justice has the authority, prestige and background needed to face the challenge.
The GCC has fired once again, but it would be a very reductionist reaction to simply say that it is a mindless and nationalistic claim from Karlsruhe. On the contrary, this is yet another reminder for the Court of Justice of the importance of fundamental rights, and of the importance of its role as interpreter of the Charter. In other words, this is another opportunity for the Court of Justice to forget that phrase so frequently used by its judges in public lectures, according to which “we are not a fundamental rights court”. Whether they like it or not, they have become one. The longer they stubbornly resist this reality, the more painful the awakening will be.