The EU Humanitarian Admission Scheme for Syrian Refugees in Turkey 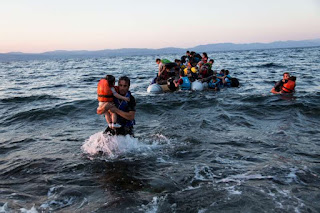 On 15 December 2015, the European Commission published a recommendation concerning a humanitarian admission scheme for Syrian refugees in Turkey. The recommendation follows a June 2015 decision to implement an intra-EU relocation programme and a scheme of resettlement from third countries. The document also builds on an action plan released in October 2015 and a more recent decision to provide €3 billion for a Refugee Facility that will “coordinate and streamline” the provision of humanitarian assistance to Syrian refugees in Turkey. The recommendation calls for a “rapid, efficient and voluntary scheme” for the “orderly, safe and dignified arrival” of these individuals.

Three aspects of the recommendation stand out and merit further analysis. First, the Commission noted the importance of demonstrating solidarity with Turkey since the country hosts more than 2.2 million Syrian refugees at present. However, though Turkey hosts the largest absolute number of Syrian refugees, Jordan and Lebanon bear the greatest (relative) responsibility for these refugees. Indeed, whereas Syrian refugees comprise approximately 3 per cent of the total population of Turkey, they make up roughly 10 percent of the population of Jordan and more than 20 per cent of the population of Lebanon. Nevertheless, the recommendation to offer humanitarian admission to refugees from Turkey is perhaps to be expected given that the EU shares a border with Turkey and thousands of refugees have attempted the perilous journey across the Aegean into Greece. Furthermore, Turkey is a candidate for accession to the EU, while Jordan and Lebanon are simply considered to be part of the broader ‘European neighbourhood.’ Though negotiations on Turkish accession opened in 2005 and have proceeded slowly since then, the European Union and Turkey may be in the process of forging a new and more cooperative relationship in migration that could enhance refugee protection and “re-energize” these complex discussions.

Second, the recommendation also emphasises the voluntary nature of participation in the proposed scheme. The Commission indicated that all Member States, plus members of Schengen, are welcome to join the humanitarian admission programme. This approach is consistent with some of the previous intra-EU relocation efforts – namely EUREMA I and II. The decision to offer Member States a choice in participating in this programme is not especially surprising given the challenges the Commission faced in securing the agreement of some Member States on national quotas for the intra-EU relocation programme proposed last summer. In that context, recent media reports indicate that EU Migration Commissioner Dimitri Avromopoulos has acknowledged that “relocation does not work.” This statement is supported through data released on 20 January, 2015 which demonstrate that Member States pledged just over 4,200 places (as opposed to the Commission’s target of 160,000 places) and only 331 individuals have been relocated from Greece and Italy to date.

From a normative perspective, the desire to demonstrate international solidarity aligns with the principle of international cooperation outlined in the preamble to the 1951 Convention. However, this voluntary approach – combined with a clear lack of enthusiasm for the most recent relocation scheme – raises the age-old question of whether the European Union can truly achieve a cohesive approach to humanitarian protection.

Finally, the recommendation is notable for its strategic approach, as embodied in the desire to achieve a “sustainable reduction” in irregular migration from Turkey to the European Union. Since 2003, the United Nations High Commissioner for Refugees (UNHCR) has attempted to reframe resettlement as a strategic instrument for protection that emphasises the direct and indirect benefits of resettlement for refugees, host countries, receiving countries, and the international refugee protection regime. However, the organisation also recognised the importance of ensuring that such programmes do not create a “pull factor” for further migration. The UNHCR suggested that this can be achieved by establishing “clear and transparent” selection criteria. In this case, the Commission has proposed that only those who registered their presence with Turkish officials prior to 29 November, 2015 will be eligible for humanitarian admission. The Commission also recommends that participating countries assess why the individual fled Syria and examine their vulnerability and potential family ties within the European Union, among other criteria.

Though managing this humanitarian admission programme in a strategic manner could encourage Turkey to continue welcoming asylum seekers and also enable some Syrians to benefit from international protection, there are questions as to how Turkey will seek to manage ongoing arrivals. Furthermore, the UNHCR has noted that the decision to offer a durable solution to certain refugees can potentially create “bitterness and resentment” among ineligible groups, particularly in cases where these groups do not have access to effective protection in the host country. This raises questions about how the prospective decision to offer humanitarian protection to Syrian refugees will be perceived by the tens of thousands of Afghan, Iranian, and Iraqi refugees who have long resided in Turkey and may be obliged to wait up to 10 years for a decision on their respective applications for protection.

Though the recommendation offers clear operational guidelines, it does not indicate how many refugees can or should be offered protection through this proposed scheme. Instead, the Commission notes that the number of individuals offered admission should be determined according to UNHCR processing capacity, the number of displaced persons in Turkey, and the impact of efforts to reduce irregular migration to Turkey (a measure that has attracted criticism from the European Council on Refugees and Exiles). Furthermore, the Commission has recommended that participating Member States admit those granted subsidiary protection in an “equitable” manner. However, given the aforementioned challenges the Commission faced in securing Member State agreement on quotas for the intra-EU relocation programme, this could prove more difficult than anticipated. Overall, it remains unclear whether this humanitarian admission programme – if adopted – will have a meaningful impact on the substantial number of Syrian refugees residing in Turkey at present.