‘Hotspots’ for asylum applications: some things we urgently need to know 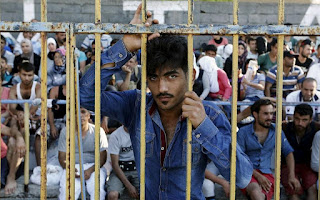 Through the mechanisms it is setting up for the relocation of refugees from Italy and Greece, the EU is trying to regain control of refugee movement in the EU. The tough screening process it is setting up at points of entry into the EU seems designed as a crude instrument to separate out a minority of ‘good’ refugees from what EU ministers want to convince us are a majority of ‘bad’ economic migrants, and to dispatch the latter rapidly and efficiently. But life is not that simple, and the hotspots’ screening procedures could result in large numbers of people being returned to unsafe or unviable situations without proper consideration of their claims.

According to the Commission's explanation of 'hotspots', as part of the package decided on in September,  EU agencies including Frontex and Europol, as well as the EU’s asylum agency will help national officials in Greece and Italy to identify, fingerprint, screen and register asylum applicants, organise relocation to other member states of those who qualify and remove from the territory those ‘who either did not apply for international protection or whose right to remain on the territory has ceased’. (See Article 7 of the second Council Decision on relocation of asylum-seekers).  The European Commission has said that these functions will be performed in ‘hotspots’ in Greece and Italy. Four locations in Italy are already apparently operating, with a total capacity of 1,500:, with another two promised for the end of the year. In Greece, a ‘headquarters hotspot’ is to be set up in Piraeus, where asylum seekers arriving on the islands will be gathered and processed.

Organisations such as Doctors of the World welcomed the announcement as providing some official framework for reception, which they hope will allow them to operate in a more regulated environment. But questions arise immediately. What will the hotspots look like? Will refugee applicants be detained there? Are they to be refugee camps or removal centres? Matteo Renzi suggests they will be EU-run refugee camps, while Francois Hollande sees them as deportation camps – which suggests detention and coercion. And how are decisions to be made, and reviewed?

We know from the Council decisions of 15 and 22 September that only those nationalities with a recognition rate (as refugees or persons needing international protection) of 75 percent or more will be accepted for relocation. As Steve Peers points out in his previous blog post on relocation, those who benefit from the process (for instance, Syrians, Iraqis and Eritreans, according to current statistics) will be allocated on a no-choice basis (although family unity must be respected), while host countries can express a preference for the kinds of asylum seekers they are prepared to take. No prizes for guessing those at the top and bottom of any preference list. For those relocated, attempts to move from their new host country to somewhere more sympathetic, less racist or where more compatriots live will be met with speedy return to the allocated host. Beggars can’t be choosers.

Peers covers the problems of relocation in his piece. I want to raise questions about the screening process, and what happens to those who are not selected for relocation. Will tests be administered to determine whether applicants are genuinely of the nationality they claim? According to the EU Commission’s paper, Frontex already deploys screening and ‘debriefing’ experts in Italy and Greece (presumably to ask questions about routes taken to get there, with a view to gathering intelligence about smugglers), in addition to ‘advance-level document experts’. These ‘experts’ are likely to be seconded civil servants from member states’ interior ministries. As such, will their mindset be attuned to detecting fraud rather than responding to need? What documents will they be scrutinising? Will possession of a genuine and valid Syrian, Iraqi or Eritrean passport (for instance) be a prerequisite to acceptance?  If not, what will nationality-testing entail? And given the shambolic nature of the language and knowledge tests imposed by the Home Office in the UK to determine asylum claimants’ nationality, what appeal or review rights will there be against a decision that someone is not in fact Syrian, or Eritrean or Iraqi?

And what will happen to those not from the big three refugee-producing countries? Presumably, the idea behind the hotspots is that all claims for international protection which do not lead to relocation will be dealt with there. If so, will claimants remain there for the duration, and if not, where and how will the residual group of claimants not selected for relocation live while their claims are processed? And how will their claims be processed? What will the timescales be? In the pressured environment of the camps, where speedy processing will be a priority, claims for international protection are unlikely to receive the careful and sympathetic assessment required by the 1979 UNHCR Handbook. So what will the procedures be? Crucially, what rights of appeal will there be against negative decisions?

It is presumably to facilitate speedy decision-making that the Commission’s package includes a proposed regulation for a list of safe countries of origin, containing countries of the western Balkans – Albania, Bosnia and Herzegovina, the former Yugoslav Republic of Macedonia, Kosovo, Montenegro and Serbia – and Turkey. While the proposed list does not mean automatic rejection of claims, its presumption that the country is a safe one for nationals to return to is a strong one, and forms the basis of an accelerated procedure which, as we know from the UK experience (the 'detained fast-track' process, currently suspended after judicial recognition of its unfairness to applicants), easily becomes a self-fulfilling process of rejection. The Commission itself acknowledges the un-safety of most of these countries for Roma, for LGBTI and for other minorities, and for Kurds, journalists and ‘others’ (such as political opponents) in Turkey. As Steve Peers points out in his blog post, ‘Safe countries of origin: assessing the new proposal’, Turkey does not belong on any safe country list; nearly a quarter of asylum applications by Turkish citizens were successful.

But if fair determination procedures are not in place, or if it soon becomes apparent that the hotspots are not a gateway to protection, or that application could lead to relocation to a hostile country, why would those who need international protection apply? The Council decisions state the obvious – that only those who have sought protection are eligible for relocation. But Frontex’s removal remit covers not just those whose claims are exhausted and so have no claim to remain on the territory, but also those who have not claimed protection. Does this mean that Frontex officials have a roaming mandate to go around Italy and Greece rounding up all those who have not registered a claim for asylum? The opportunity to claim international protection should be available at any time, up to the point of removal; but how will this right be guaranteed?

Without clear and robust safeguards in place, the EU’s relocation package could turn out to be a figleaf for a quiet but massive removal operation against, rather than a protection operation for, those arriving on Europe’s shores.