The CJEU and the rule of law in Poland: Note on the Polish Supreme Court preliminary ruling request of 2 August 2018 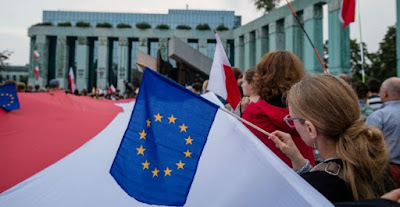 
As Eugene Ionesco put it, you can only predict things after they have happened (Rhinoceros, 1959).


On Thursday the Polish Supreme Court submitted to the European Court of Justice a preliminary ruling request under Article 267 TFEU. While doing so it also suspended the application of a Polish law forcing the early retirement of Supreme Court justices who are above 65 years old, including the President of the Supreme Court whose mandate is guaranteed by the Polish Constitution. This is a challenge to the Polish government’s changes to the judiciary, on the grounds that it violates the rule of law.


There were many preliminary ruling requests in the course of the history of EU law from van Gend den Loos, Costa/Enel, Nold, Francovich, Defrenne, Akerberg Fransson, Melloni, Pringle, Gauweiler and many others which shaped a ‘constitutional order of States’. Judicial dialogue established under Article 267 TFEU has been a cornerstone for the development of the EU legal order.


Thursday’s request might, however, not constitute just a major doctrinal novelty. The Polish Supreme Court stepped into the path of active claim for rule of law, which is not only a common principle to Member States, but also expression of the axiology on which EU is founded as expressed in Article 2 TEU. Polish judges seek advice which will in a way sans precedent engage the Court of Justice in the legal and political battle for independent justice in Poland. It is a symbolic proof of how much Europe is needed and how crucial and fragile the enforcement of common values turns to be.


The Court of Justice has already prepared the foundations of such action in recent cases such as C-64/16, Associação Sindical dos Juízes Portugueses (on the independence of Portuguese judges in the context of austerity, discussed here) and C‑216/18 PPU, LM (on the recognition of Polish European Arrest Warrants in light of rule of law concerns), where Article 19 TEU (which sets out the basics of the CJEU’s role) was linked to the protection of the rule of law. Consequently, it is, according to the Court, for the national courts and tribunals and the Court of Justice to ensure the full application of EU law in all Member States and judicial protection of the rights of individuals under that law. It follows that every Member State must ensure that the bodies which, as ‘courts or tribunals’ within the meaning of EU law, meet the requirements of effective judicial protection, which include, in particular, the independence and impartiality of those courts.


In the present case, the Polish Supreme Court referred to the Court of Justice five questions which relate mostly to the interpretation of the principle of judicial independence in the light of EU primary law (Articles 2, 4(3), 19 (1) TEU as well as Article 47 of the Charter of Fundamental Rights). Other questions focus on the interpretation of Directive 2000/78, which includes the principle of non-discrimination based on age. The referring judges also applied for the application of the expedited treatment of the case under Article 105 of the Rules of Procedure of the Court of Justice.


Unsurprisingly, it is the suspension of the application of the national law which caused fierce criticism of the highest Polish authorities. Yet, Polish Court acted in perfect conformity with the classic case-law of the Court concerning interim measures (Factortame, Zukerfabrick, Atlanta) whereby national courts suspend application of a national measure which represents a risk of breach of EU law, pending the decision of the CJEU clarifying whether there is a conflict between national law and EU law (or, in some cases, on whether an EU law being challenged in the national courts is invalid).


The underlying question is whether the CJEU is willing to address the rule of law dispute in Poland directly, via use of the preliminary ruling procedure, or leave the issue to the EU’s political authorities, which are considering warning or sanctioning Poland under the process set out in Article 7 TEU. The Polish Supreme Court is potentially opening a new chapter in the enforcement of EU law and values.