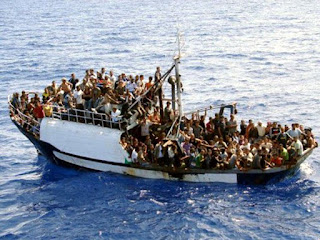 
This week the European Commission took its first steps towards implementing its new EU Migration Agenda (previously discussed here). A number of the items in the agenda have already been addressed (for instance, the military mission against smugglers on the Libyan coast, as discussed here). Others will be addressed later: a broader reform of legal migration law and changes to the rules on asylum procedures and the ‘Dublin’ rules on responsibility for asylum-seekers.


The first batch of measures contained five different elements. First of all, the Commission launched a public consultation on the reform of the existing EU law providing for a ‘Blue Card’ for the admission of highly-skilled non-EU migrants. I have commented previously here on the implementation of this law and the reforms to it which should be adopted.


Secondly, the Commission released an Action Plan against migrant smuggling. This mainly elaborates upon several ideas mentioned already in the main agenda. This includes: a revision of EU anti-smuggling law, planned for 2016, to increase smugglers’ penalties and clarify humanitarian exceptions from the rules; possible new rules on immigration liaison officers in 2016; a Handbook on expulsion in 2015; a possible revision of the rules on trafficking victims, in 2016, to include ‘victims’ of smuggling; a revision of the legislation on Frontex (the EU border agency), to give it more powers relating to expulsion; changes to the rules on the Schengen Information System in 2015-16, so that all Schengen Member States’ entry bans are applicable across the Schengen area; a handbook on prevention of migrant smuggling in 2017; readmission agreements with sub-Saharan countries; and stronger enforcement of the rules prohibiting employment of irregular migrants. Most of these measures concern all irregular migrants, not just those who were smuggled to the EU.


Thirdly, the Commission adopted a Recommendation on the resettlement of refugees directly from outside the EU to EU Member States. As a Recommendation it is non-binding, and as an act of the Commission, it does not need the approval of the Council or the European Parliament. According to the new Immigration Agenda, there will be EU funds attached to each resettled refugee, so Member States are encouraged to resettle people. It is a useful measure to ensure that a bigger number of persons are rescued without having to risk their lives or pay smugglers to cross the Mediterranean, although the overall numbers are likely to be modest.  In the event that Member States do not make use of the Recommendation to resettle refugees, the Migration Agenda promises a proposal for a binding measure, although it might be hard to find sufficient support in Council for its adoption.


Fourthly, the Commission issued guidance on the fingerprinting of asylum-seekers, as provided for in the EU’s Eurodac legislation, which sets up a database of such fingerprints in order to apply the ‘Dublin’ rules more effectively. In the Commission’s view, any irregular border-crosser who refuses to give fingerprints ought to be detained, expelled and subjected to an entry ban, in accordance with EU asylum law and the Returns Directive. Alternatively, Member States could force them to take fingerprints, with a possible exception for pregnant women and minors. Frankly, the correct application of the EU’s Dublin system is not worth the health of life of a single unborn child.


Moreover, the Commission appears to be confused about the details of the relevant legislation. It would be necessary to prove that refusal to take fingerprints ‘avoids or hampers the preparation of return or the removal process’ to justify detention under the Returns Directive; but the purpose of the fingerprinting is mainly to apply the Dublin asylum rules, not to ‘prepare the return and/or carry out the removal process’, which is the legal basis for detention of irregular migrants under the Returns Directive. Furthermore, the rules on entry bans in that Directive make no reference to the issue of fingerprinting. As for asylum-seekers, the paper is correct to say that they can be detained in order to ‘verify their identity and/or nationality’ in the EU’s Reception Conditions Directive. However, for asylum-seekers who have been fingerprinted already by a Member State and then apply for asylum in a second Member State, the Commission fails to mention that the Dublin rules apply. They permit detention only where there is a ‘significant risk of absconding’, which does not automatically follow from a refusal to be fingerprinted.


Fifthly, the Commission proposed a Decision on relocation of asylum-seekers between Member States. This is the only one of this week’s proposals which would (if adopted) be legally binding. Like most Commission proposals, this needs a qualified majority of Member States to support it in the Council; unlike most EU law, the European Parliament need only be consulted. It seems from press reports that there will be a ‘blocking minority’ of Member States preventing its adoption, unless some of them change their position. It’s also possible that it will be agreed, but with major changes. But for now, let’s look at what the proposal would do if adopted.


The main thrust of the proposal is to derogate from the usual ‘Dublin’ rules as regards Italy and Greece, and distribute about 40% of the asylum-seekers which would normally be the responsibility of those Member States under the Dublin rules to other Member States. Due to opt-outs, the other Member States will not include Denmark or the UK, although it seems possible that Ireland will opt in. The proposal also will not apply to the non-Member States bound by the Dublin rules (Norway, Switzerland, Iceland and Liechtenstein). It would effectively be a regime within a regime, with only 25 or 26 of the 32 Dublin States applying it.


The relocated asylum-seekers will be split 60/40 between Italy and Greece, and will be allocated to other Member States on the basis of the criteria set out in the Annexes to the proposal. Relocation will be selective, applying only to those nationalities whose applications have over a 75% success rate in applications for international protection. It’s clear from the proposal that the Commission believes that only Syrians and Eritreans will qualify. The Member State of relocation will be responsible for considering the application, and asylum-seekers and refugees will not be able to move between Member States, in accordance with the normal Dublin rules. (After five years’ residence, refugees can move between Member States, according to the EU’s long-term residence Directive).


Besides the nationality criterion, who will be relocated? Asylum-seekers must be fingerprinted in order to qualify. The selection of asylum-seekers will be made by Italy and Greece, who must give ‘priority’ to those who are considered ‘vulnerable’ as defined by the EU reception conditions Directive. This refers to a long list of people:


‘such as minors, unaccompanied minors, disabled people, elderly people, pregnant women, single parents with minor children, victims of human trafficking, persons with serious illnesses, persons with mental disorders and persons who have been subjected to torture, rape or other serious forms of psychological, physical or sexual violence, such as victims of female genital mutilation’


Implicitly, the other Member States must accept the asylum-seekers nominated by Italy and Greece, except that they can refuse relocation if it’s ‘likely that there are national security or public order concerns’.


What about the asylum-seekers themselves? There is no requirement that they consent to their relocation or have the power to request it. The proposed Decision only requires Italy and Greece to inform and notify the asylum-seekers about the relocation, and the Commission suggests that they could only appeal against the decision if there are major human rights problems in the country to which they would be relocated. So neither the relocation itself, nor the choice of Member State that a person will be relocated to, is voluntary. This is problematic, since forcing asylum-seekers to a country that they don’t want to be in is one of the key problems facing the Dublin system already.


Of course, it’s possible that like children left in an orphanage who weren’t picked by new parents, there will be rather more asylum-seekers disappointed that they were not selected for relocation.  Do they have the right to a legal challenge? Arguably yes, to the extent that Italy and Greece select people who are not vulnerable for relocation, in light of their legal obligation to select vulnerable persons as a priority.


Asylum-seekers do have the right to insist that their core family members (spouse or partner, unmarried minor children, or parents of minors) who are already on EU territory come with them to the relocated Member State. It’s not clear if Member States could count the transfer of family members towards their overall quota. If the asylum-seekers obtain refugee status in the State of relocation, they could also apply for family reunion under the EU’s family reunion Directive.


Similarly, it’s not clear if Member States can count towards their overall quota asylum-seekers who would normally be the responsibility of Italy and Greece, but who have already found their way on to another Member State’s territory. This might be termed relocation sur place. According to the rules in the Decision, this would in any event depend upon the willingness of Italy and Greece to designate such asylum-seekers for relocation. And as the Commission notes, persons who would already be the responsibility of Greece cannot be sent back there anyway due to the collapse of the asylum system in Greece, according to the CJEU ruling in NS (the position regarding Italy is more qualified: see the discussion of last year’s Tarakhel judgment). Of course, it is possible that the relocation of significant numbers of asylum-seekers away from Greece will contribute to solving the systemic problems with that country’s asylum system in the foreseeable future.


Overall, if the Council is willing to agree to the proposed Decision, it is likely to make a significant contribution to solving the problems with the asylum systems of some Member States, although only the more significant review of the Dublin rules promised for 2016 (or a profound improvement in the situation of countries of origin or transit) could provide a long-term solution. It is very striking that while this proposal effectively admits that the Dublin system is profoundly dysfunctional, the separate set of fingerprinting guidelines issued on the same day adopts a tone of head-banging savagery to try and get that system to work.
A final question arising is the impact of the proposed asylum measures on the UK. While the UK has an opt out, some suggest that all asylum-seekers who reach the EU could ultimately obtain EU citizenship and then move to the UK. However, the proposed Decision only relocates asylum-seekers who have already reached the EU, rather than increase the total number of asylum-seekers. Furthermore, a recent fact check suggests that only a modest number of non-EU citizens get Italian nationality each year, and that Italy only grants refugee status to a handful of people. Indeed, the only prominent Italian citizen with an African background currently in the UK is Mario Balotelli - but I don't want to intrude into the private grief of Liverpool football fans.