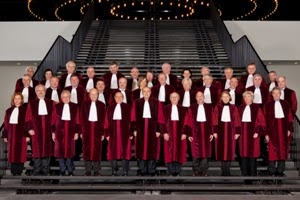 
The Court of Justice has recently proposed that the EU should double the number of judges on the General Court, and abolish the EU’s Civil Service Tribunal. Why did the Court propose such a dramatic change to the EU judicial system? And is it a good idea?


The development of the EU judicial system has been dominated by a steady increase in the volume of litigation, leading to disputes over how best to manage this workload. Traditionally, the solution has been to increase the number of EU courts. So the Single European Act, in force 1987, amended the Treaties to give the EU the power to establish a Court of First Instance (later renamed the ‘General Court’ by the Treaty of Lisbon) to assist the Court of Justice with its tasks. This power was used to create that Court in 1989; both Courts have always had one judge per Member State.


Yet over time, this transfer of jurisdiction to the Court of First Instance overburdened that Court in turn. So the Treaty of Nice, in force 2003, gave the EU power to create a lower tier of EU courts, called ‘judicial panels’ (renamed ‘specialised courts’ by the Treaty of Lisbon). Only one such specialised court has been created: the EU Civil Service Tribunal, which began its work in 2005.  It has seven judges.


But as the EU built more courts, more litigants came. By 2011, the CJEU was again trying to find a way to cope with the increasing volume of litigation. This time, instead of suggesting the creation of a new Court, it proposed that 12 more judges be appointed to the General Court. At the same time, it also proposed other amendments to the Court’s statute, as well as the creation of a class of temporary judges to assist the Civil Service Tribunal.


Member States in the Council, as well as the European Parliament (the ordinary legislative procedure applies to such changes), adopted the proposal on temporary judges for the Tribunal, as well as most of the other proposed changes to the CJEU Statute. But they did not adopt the increase in the number of judges on the General Court. While they agreed with the increase in principle, they could not agree how to share the extra judges among Member States, or how to rotate the appointments between them.


While these discussions dragged on without any conclusion, the backlog of cases at the General Court has continued to rise. And from this autumn, the situation at the Civil Service Tribunal has begun to worsen as well, with the Council unable to fill two vacant slots due to the same arguments about the principle of rotation.


So the Court of Justice has made a new proposal: to double the number of judges in the General Court to two/Member State, while abolishing the Civil Service Tribunal. This would take place in three stages: 12 new judges in the near future, transfer of the seven Tribunal judges in 2016, and appointment of the remaining nine judges from 2019. It remains to be seen whether the European Parliament and the Council will accept this proposal.


Undoubtedly, some remedy is necessary to deal with the ever-increasing workload of the General Court. The EU has an obligation under Article 47 of the Charter of Fundamental Rights to deal with cases within a reasonable time. While the new judges will cost money, failing to appoint them will cost money too: as the Court’s proposal points out, there are now cases pending seeking damages because the EU judicial system has failed to uphold the obligations imposed by Article 47.


There are two options available to this end (without a Treaty amendment): the creation of more specialised courts, or the addition of more judges to the General Court. (It should be noted that the planned ‘Unified Patent Court’ is not a specialised court, but a form of shared national court; for more details, see last week’s blog post on the developing EU patent system).


Why this difference of opinion? One reason is that EU judges look forward to dealing with civil service cases about as much as a cat looks forward to a bath. The judges at the General Court thought they had got rid of these cases forever (except for appeals from the judgments of the Civil Service Tribunal). Indeed, there’s a rumour that on the day that Tribunal was created, every shop in Luxembourg ran out of champagne. But now, to the horror of its judges, these cases seem set to return to the General Court.


On the other hand, the judges of the Civil Service Tribunal, after years of dockets consisting entirely of feuding functionnaires, can look forward to ruling also on bolshy Belarussians and money-grubbing monopolists in the near future. Of course, by the time that the General Court consists of twice as many judges as the Court of Justice, the former will outnumber the latter - although the Court of Justice, not the General Court (or the CJEU as a whole), which has the power to make proposals to amend the rules. (So does the European Commission).


Viewed objectively, which of these solutions is best? The Court’s proposals make a number of good arguments for increasing the number of General Court judges. First of all, there is a good case that the creation of specialist courts is less flexible, since litigation can increase in areas not within their jurisdiction (such as foreign policy sanctions, in recent years). Also, the creation of such courts does not necessarily solve the workload problem, since the cases most suitable for such courts (like trademark disputes) are often easy to deal with, and about a third of such cases will be appealed to the General Court anyway. Moreover, it makes sense to keep such disputes closer to the Court of Justice (via means of appeals from General Court decisions), since that Court has to deal with similar cases in this context of references from national courts on the EU’s trademark Directive, and on the relationship between intellectual property law and EU free movement and competition law.


Furthermore, it takes longer to set up a new specialist court than to appoint more judges to the General Court. While it is possible in theory to deal with the ‘national representation’ issue by ensuring that there is one more judge per Member State across the General Court and a number of specialised courts, the Court of Justice is right to believe that it will be difficult to operate such a system in practice. The Council’s recent illegal refusal to appoint judges to the Civil Service Tribunal has shown that it values pork-barrel politics more than the rule of law.


Finally, the most recent proposal will have the singular advantage of simplifying the EU judicial system, eliminating an entire tier of courts as well as the complex rules applying to screening whether the Court of Justice ought to review a judgment of the General Court on an appeal from a specialist court. This would make the EU’s judicial system easier to understand for the general public – and in particular, for the beleaguered students of EU law.