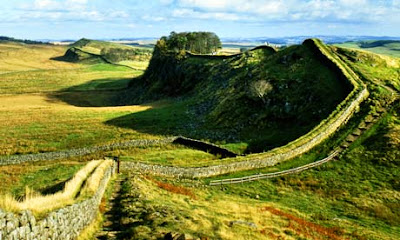 
It is widely believed that the Romans built Hadrian's Wall to keep marauding Picts (modern day Scots) at bay from civilised Britannia. Certainly the Wall in Game of Thrones is intended to keep out the angry, hairy mutants to the North.

The British Home Secretary, Theresa May, recently revived thoughts of these walls when she suggested that in the event of an independent Scotland, border control would have to be reestablished between Scotland and the rest of the UK. At first sight, this is an extreme and therefore unconvincing threat, reminding me of the sort of threats I sometimes issue to my children in desperation.
But is this threat actually plausible? In particular, is there any basis to her claim that the rest of the UK would need to erect border controls to protect itself from a highly liberal Scottish immigration policy? This time around, the border would not be there to stop the Picts or the resident mutants, but rather the citizens of other countries using Scotland as a sort of cat flap to gain entry to the rest of the UK.

The starting point when assessing this argument is to examine the two current regimes of multinational border control in Europe: the Schengen system and the Common Travel Area between the UK and Ireland. The Schengen system in principle bans all internal border checks unless there are exceptional circumstances, and establishes common rules on visas and external border controls. It does not establish common rules on longer term immigration or asylum, although the EU is moving to agree such rules gradually. However, third-country nationals with residence permits or long-stay visas have the freedom to travel within the Schengen area for long periods.

In the Common Travel Area, there are in principle no internal border checks, although Ireland in fact applies checks as regards some forms of travel and travellers may need photo ID to prove their identity and nationality. The two countries don't have identical visa lists, and those with residence permits and visas from one country don't have the right to visit the other one. There is also informal cooperation on immigration policy, as examined in detail by Bernard Ryan.

This system has survived for nearly 100 years, with several suspensions and modifications during that period. Indeed, it has survived through the last few decades of increased international travel, not to mention the Troubles. It is hard to imagine that a version of this regime could not be agreed between the UK and Scotland. Moreover, introducing border control as regards Scotland is a more difficult and expensive proposition as compared to Ireland, given that far more of the travellers concerned are crossing land borders.

So it may be concluded that the Home Secretary's threat is unlikely to be carried out. Moreover, her threat breaks a cardinal rule of parenting: only threaten if necessary. Having been told off in turn by a Canadian central banker and a Portuguese former Maoist, the Scots hardly look naughty enough to vote for independence at the moment. Of course, given her emphasis on immigration control, it is clear that the Home Secretary's real objective is not to become the Queen in the North, but rather to bolster her claim to the throne of the Conservative party, if it becomes vacant.