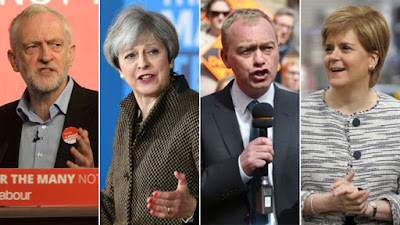 Tomorrow sees another general election in the UK, just two years after the last one. Since this is (according to the Prime Minister) an election on Brexit, it seems appropriate to review the parties’ views on this issue, including future UK/EU relations. I will examine the parties’ views in turn – focussing on larger UK-wide parties plus (due to its political importance) the Scottish National Party. The final section is an overview and comparison.

The Tory manifesto position on Brexit is largely a summary of the position set out in the Brexit White Paper (discussed here), and the planned Great Repeal Bill (discussed here), which would keep EU law as part of ‘UK law’ for the time being. Essentially, the Tories believe that the future UK/EU relationship should be based on a free trade deal without ‘vast’ payments into the EU budget or free movement of persons. Participation in the customs union and internal market would end, and there are some details about the transition to full separate UK participation in the World Trade Organisation. There’s an objective of continuing security cooperation with the EU, but the details are not spelled out.

Some fair settlement of UK accounts would be made upon departure from the EU, but the Tory policy is ‘no deal is better than a bad deal’ – without spelling that position out further. Fortunately, the UKIP manifesto (discussed below) addresses this point. Unlike UKIP, the Tories do not attempt to ‘sell’ the no-deal scenario – which is just as well considering the concerns about its potential economic damage. Rather there is much discussion of what the positive outcomes of a deal would be.

Future immigration policy would retain an objective of net immigration below 100,000 – which would entail reducing non-EU migration (an issue largely outside the scope of EU law for the UK) as well. This would include further restricting the number of foreign students and family members, despite promises from the Leave side made during the referendum campaign to make it easier to admit UK citizens’ non-EU family members.

Labour accepts the result of the referendum but sets out in more detail than the Conservatives what the future UK/EU relationship would look like.  It supports continued relations with Euratom and the single energy market, plus wants to maintain the ‘benefits’ of the single market and customs union without explaining how. Other remarks from the party suggest that it opposes continued participation as such in the single market and customs union, and opposes free movement of persons continuing.

Labour reject the ‘no-deal’ option, support a transitional deal, and list a number of areas where they still wish to cooperate with the EU: research programmes, Erasmus, Europol, Eurojust, the European Arrest Warrant (EAW), climate and anti-terrorism cooperation.  They have a different policy from the Tories on future family migration, as they would waive the strict income requirements for family members rather than tighten them. (There would still be a requirement not to use public funds). They would ‘guarantee existing rights’ of EU citizens in the UK. They set out in detail their future trade policy, insisting on links between trade and other concerns like the environment and human and labour rights.

The LibDems aim for a referendum on the final Brexit deal, and support continued membership of the EU single market (including free movement of people) and customs union. They make specific reference to staying in Erasmus, preserving social and environmental rights, and participating in Europol, the EAW, EU databases, EU research funds, the European health card, abolition of roaming fees, and pat passports. Like Labour, they suggest links in between human rights and the environment in future trade deals. LibDems also give some detail on the position of EU citizens in the UK:

Similar to the LibDems, Greens propose a referendum on the final Brexit deal, and seek to continue with free movement and the single market. They also wish to guarantee EU citizens’ rights, retain social and environmental safeguards, and link trade deals to other standards.

Finally, that brings us to the UKIP manifesto. This manifesto gives us an indication of how the ‘no-deal’ scenario hinted at in the Conservative manifesto might play out. UKIP opposes the use of the Article 50 procedure to negotiate with the EU, focussing instead on the purely domestic law change of repealing the European Communities Act. They still aspire to a free trade deal with the EU, however, although they are indifferent to whether they get one – since they also promise to spend the £11 billion “windfall” from tariffs on EU goods. There’s no acknowledgement of the effects on the UK economy of this scenario: indeed, they argue that talk of a “cliff edge” from leaving the EU without a trade deal is “hyperbole”, since trade will still continue. This ignores the obvious prospect that the level of trade will decrease if tariffs and non-tariff barriers are imposed. While they reject the single market and customs union, they want EU/UK trade to continue “on the same basis as present”.

In any event, UKIP not only refuse to make any payment upon departure, they expect the UK to receive a sum from the EU as it leaves. Moreover, they pledge to oppose the existence of customs unions like the EU in the World Trade Organisations – even though the WTO expressly provides for the existence of customs unions, and (as UKIP even acknowledge) the EU is a WTO member in its own right.

Overall then, UKIP expects to receive all the current trade benefits of EU membership, with none of the perceived drawbacks, plus a payment on the way out. All of this while refusing to use the official departure route and campaigning to end the EU’s existence as a customs union and WTO member. If you seek a visual metaphor for how UKIP sees the world, imagine their leader Paul Nuttall – a star football player in his own mind - repeatedly scoring penalties over the heads of 27 massed goalkeepers.

UKIP’s rage against the dying of their light deserves one final paragraph. Their immigration policy includes not just an unreal zero migration target, but also a demand that new immigrants observe UK “values” to be admitted. This from a party who have continually disregarded the basic British values of tolerance, equality and fair play: members have referred to gays causing floods, and repeatedly insulted minorities. Indeed, after the last European Parliament election, to receive EU money UKIP did a deal with a party whose leader denies the Holocaust, and claims that women are inferior and obtain their political beliefs via biological transmission from the men they have sexual intercourse with. Clearly, politics’ loss is gynaecology’s gain.

There are two broad categories of opinion on the EU in this election, but also important differences within each group. The Liberal Democrats, Greens and SNP want to continue participation in the single market as well as a number of other EU policies. Moreover, all three parties want to offer the option of continued EU membership – the LibDems and Greens by means of a UK-wide referendum on the final deal, and the SNP by means of a referendum on Scottish independence.

The Conservatives, Labour and UKIP all favour departure from the UK without the single market, the customs union and free movement of persons, and aim instead for a free trade deal with the EU. However, these similarities soon end.  Like the first group of parties, Labour would guarantee EU citizens’ rights (in fact, it supports guaranteeing their existing rights, an important nuance), and would seek participation in a number of specific EU measures. The Tories are considerably cooler and less detailed on these issues, and are willing to contemplate a ‘no-deal’ scenario, although they cannot bring themselves to ‘sell’ it. Labour would welcome foreign families and students; the Tories see them as numbers to be reduced.

UKIP offers voters not just one fantasy, but a choice of two fantasies: either a problem-free ‘no-deal’ scenario, or a deal with all of the benefits and none of the supposed drawbacks of EU membership, with a gold watch for UK service to the EU thrown in for good measure. Of course, some would argue that UKIP’s fantasies are simply more explicit than Labour’s or the Conservatives’ – since the EU has made clear in its negotiating position that it is not possible to retain all benefits of the single market for a former Member State which leaves it.

Voters may not wish to make Brexit the main reason for their vote, or may in any event choose to cast a tactical vote against a party they dislike, rather than vote for a party which they most agree with but which has no chance of winning their seat. But it can hardly be said that all parties take the same view on Brexit issues, and the summary above makes clear that for those whose concern is Brexit first and foremost, there is a lot at stake in this election.