Scotland, the EU and ‘indyref2’: the legal issues 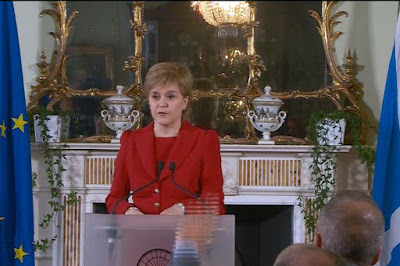 Yesterday, Scotland’s First Minister (Nicola Sturgeon) announced the Scottish Government’s wish to start the process of holding a second independence referendum, once the main elements of the UK’s final Brexit settlement was known. This follows the UK government’s rejection of alternative suggestions put forward by the Scottish government in relation to Brexit – which I previously discussed here.

Obviously any new independence referendum raises issues besides Scotland’s relations with the EU. But since the second referendum, if it goes ahead, will be more closely linked to issues of Scotland’s EU membership than the first one, it is a good moment to outline the main legal issues – and to address one specific point (on Scottish deficits as a membership criterion) in a little more detail. Of course, this blog might well be returning to these issues again in the months to come. (Some of the following is an updated version of my blog post from October 2016 on these issues.)

Scotland as an independent non-EU country

An independent Scotland might not be an EU Member State, at least initially, but rather have an association with the EU either as an interim step toward membership or indefinitely, in the event of political difficulties obtaining EU membership on either the Scotland or EU side (or both). An association with the EU might well be closer than the relationship between the remaining UK (rUK) and the EU – particularly in light of the UK government’s intention to leave the EU single market and customs union.

The most obvious route for Scotland to consider would be membership of the European Economic Area (EEA), along with Norway, Iceland and Liechtenstein. The EEA provides for participation of these non-EU countries in the EU’s single market freedoms and all the EU legislation related to them, as well as most EU employment and environmental law. But Scotland would not be covered by EU laws in other areas, notably agriculture, fisheries, tax and justice and home affairs – although, like Norway and Iceland, it could sign separate treaties with the EU on these issues. Although the current EEA countries have joined Schengen, this is a separate issue (agreed years after the EEA), and Scotland would have no legal obligation to do the same.

There would be no obligation to join the EU single currency (or any related constraints regarding deficits), and most significantly Scotland would be free to sign separate trade agreements with non-EU countries, because the EEA does not cover the EU’s customs union. This is particularly important because it means Scotland could seek to retain a closer economic relationship with the rUK than the rUK might have with the EU. Scotland could also “go global”, as Brexiteers say, by signing up to the free trade treaties already signed by members of the European Free Trade Area (EFTA: the EEA states plus Switzerland) with non-EU countries. (In principle, EFTA membership requires this). And it would retain power to sign its own treaties on top (or to seek to retain its own versions of the EU’s free trade deals with non-EU countries, as the rUK is likely to do). Scotland would have to become a separate WTO member, but could try to fast-track this by copying the rUK’s process of detaching from the EU’s WTO membership.

Is there a downside to EEA participation? Some have argued against the UK joining the EEA due to objections to single market participation, the need to accept ECJ jurisdiction, continued contributions, its undue size compared to other members, or its lack of influence over EU laws which would apply to it. Are these arguments transferable to Scotland? The first to third objections are not, since Scots voted to remain in the EU, entailing the single market, ECJ jurisdiction and budget contributions anyway. (In fact, the non-EU EEA countries are not subject to the jurisdiction of the ECJ, but a separate body called the EFTA Court: it usually follows ECJ case-law, but its decisions are not always binding. EEA financial contributions do not go straight to the EU budget, and would logically be recalculated in light of Scotland’s economic position anyway).

The fourth objection (size) is unconvincing: Scotland is broadly comparable with Norway, in particular in terms of population, location and economy. Finally, EEA states have a modest say on EU laws, being consulted on draft EU legislation and having the option to reject the application of new EU laws (although the EU might retaliate if they do that). Anyway, this is certainly more say over EU laws than Scotland would get after Brexit as part of the UK. In fact, it’s more say than Scotland gets over EU laws while the UK is an EU Member State – given the marginal influence that Scotland has over anything that the UK government does.

So the EEA option includes things that Scotland seeks (single market participation) while steering clear of things it may wish to avoid (the single currency and deficit criteria, Schengen, EU trade policy with non-EU countries, and EU fisheries policy).  It also has the advantage of being potentially far speedier than joining the EU: the EU can decide to apply treaties with non-EU countries provisionally, pending national ratification.

What about the prospect of a ‘Spanish veto’ over Scotland joining the EEA? Here we have actual evidence to suggest that it’s not very likely. For the EU has recently concluded an association agreement with Kosovo – despite Spain (and four other Member States) refusing to recognise the independence of that country after its unilateral declaration of independence. (Note: the EEA is also an association agreement, and Member States have a veto over the initial conclusion of such treaties).

Failing EEA membership, Scotland could still seek other forms of relations with the EU which may be closer than the rUK might enjoy, possibly as a non-EEA member of EFTA like Switzerland. Unless Scotland followed Turkey in joining the EU’s customs union, this would again leave it free to simultaneously retain a strong economic relationship with the rUK.

Scotland as an EU Member State

I blogged on this issue in 2014, during the first Scottish referendum, but I’ll summarise and elaborate on those views again. The basic point is that the Treaties list the Member States by name, and since the ‘United Kingdom’ is unlikely to be interpreted as automatically referring to Scotland alone after independence, either an accession Treaty (Article 49 TEU) or a Treaty amendment (Article 48 TEU) is necessary to include Scotland’s name as a member.

The Treaty amendment route – which the Scottish government called for in the previous independence referendum – could also entail an amendment to Article 49 TEU, if necessary, to refer to the special case of Scotland: “By way of derogation from the above paragraphs, Scotland shall accede to the European Union pursuant to the Treaty of Culloden”.  One possibility is a Treaty amendment which simply replacing the words “United Kingdom” wherever it appears in the Treaties with “Scotland”; this would mean that Scotland retained the UK’s opt-outs from the single currency, justice and home affairs and Schengen (the budget rebate is set out in secondary legislation). This is perfectly feasible legally, and there is a firm precedent in the Treaty of Lisbon, which in Article 2(2) to 2(8) provides for a whole host of amendments just like this: replacing “Community” with “Union” wherever it appears, for instance.

However, the EU position at present is that it will insist upon an accession process under Article 49. This would entail a negotiation process, which could possibly be fast-tracked in light of Scotland’s existing de facto EU membership as part of the UK. It should be noted that when Iceland applied to join the EU in 2010, the Commission’s opinion on accession took account of Iceland’s EEA membership, and indeed it was possible to close many negotiating chapters quickly, before Iceland withdrew its application in 2013. By contrast, only one out of 35 negotiating chapters has been closed with Turkey, after many years of talks.

Another argument is that the EU might not be willing to talk to Scotland until it is fully independent – although it should be noted that the EU has relations with Kosovo (see above), even though not all Member States recognise that country legally.

This brings us to opt-outs. If the EU is not willing to extend the UK’s current opt-outs to Scotland, this would in principle mean full participation in the single currency and justice and home affairs policies, as well as the loss of Scotland’s share of the UK’s budget rebate to Scotland. Each issue is worth further discussion.

The rebate is set out in secondary EU legislation which usually is reviewed every seven years or so, and must be agreed unanimously. Scotland would therefore be in a position to refuse its consent on the next occasion unless a rebate were agreed.

As for justice and home affairs, a distinction must be made between general EU policies and those related to Schengen – the border-free area. On the latter point, there is already a protocol to the Treaties which guarantees the continuation of the ‘Common Travel Area’ between the UK and Ireland – which will continue to apply after Brexit. The details will have to be worked out, but the starting point legally is a requirement imposed upon the EU to protect the common travel area. Arguably this not only protects the Irish position concerning the Northern Ireland border in Brexit talks, but also the position of Scotland in potential accession talks. And whatever solution is found for the island of Ireland is therefore transposable to the (rather shorter) border between Scotland and England.

As regards other JHA issues, the UK already takes part in most civil and criminal law EU measures, and so Scotland’s participation will not change anything. It should be noted that Scotland would not have to take part in the planned European Public Prosecutor, as that body will be set up by means of ‘enhanced cooperation’ and new Member States do not have to participate in measures set up by that EU framework, which is a system allowing for the adoption of EU law by a group of willing Member States, allowing the unwilling Member States to stay out (see Article 20(4) TEU).

That brings us to the single currency – and the related issue of deficits. Scotland’s deficit upon independence is sometimes discussed as if it can be calculated with absolute certainty. This is false: the actual deficit in practice would depend upon the terms of Scotland’s arrangements with the rUK, including its share of rUK debt, as well as broader trade and economic developments, including what currency Scotland uses and the decisions on tax and spending which a Scottish government takes upon independence.

In any event, this is easily provable: the Commission’s monitoring report on Croatia joining the EU noted that it had 4% and 5% deficits* in the years just before joining the EU. But its membership was still approved.

Of course, a large deficit is going to cause a country other difficulties besides EU membership, and in the event of EU membership the rule is in principle that a country should aim for deficits less than 3% of GDP after joining. But this rule is not absolute and the EU has little means to enforce it: sanctions for breaching it can only be imposed upon Eurozone countries, and the EU has never imposed them anyway. There would be strict conditions imposed upon any bailout deal (if necessary), inside or outside the Eurozone – but that would also apply outside the EU, for countries that need a bailout from the IMF alone. Whether Scotland might have an unmanageable deficit is certainly an important issue – but it’s quite false to say that “it can’t join the EU unless its deficit is less than 3%”.