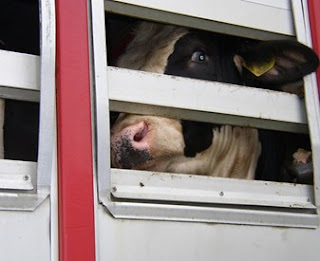 In an interesting judgment in Zuchtvieh-Transport, the CJEU has ruled that Regulation 1/2005 on the protection of animals during transport applies outside of EU borders to transport taking place in third states, if that transport began on EU territory. This is a novel ruling that is expected to have important positive impacts on animal welfare. However, it can also be seen as an example of the CJEU’s tendency in recent years to read the EU’s jurisdiction expansively, stretching traditional international law notions of ‘territorial jurisdiction’ to permit the regulation of conduct taking place in third states.

Facts and Judgment
The case at hand concerns the refusal of Stadt Kempten, a municipality in Bavaria (Germany), to issue an export permit to animal transport company Zuchtvieh-Export. In 2012, Zuchtvieh-Export planned to transport 62 cattle from Kempten to Andijan (Uzbekistan), a journey of some 7000 km. The trip would take approximately 9 days, during which time only two 24-hour long rest stops were planned. During these rest stops, the cattle would be fed and watered, but not unloaded. Stadt Kempten refused customs clearance for the cattle because this schedule was not in accordance with the provisions of Regulation 1/2005, which sets EU standards for animal welfare during transport.
Zuchtvieh-Export objected to this decision, and filed a claim at the Bayerischer Verwaltungsgerichtshof (Higher Administrative Court, Bavaria). During its proceedings, that court asked the CJEU for a preliminary ruling on the question whether, with respect to animal transport involving a long journey that begins in the EU but ends far outside of its borders, Regulation 1/2005 applies only to the portion of the transport taking place within the EU, or also to those parts of the transport taking place outside of EU territory.

The CJEU came down firmly on the side of extraterritorial application, stating unambiguously that Regulation 1/2005 “does not subject the transport of animals with a point of departure within the territory of the European Union and a destination in a third country to any particular approval scheme, different from that applicable to transport taking place within the European Union” (para. 47). The only nod the Court makes to the limits of EU authority is the following:

“Should it nevertheless be the case that the law or administrative practice of a third country through which the transport will transit verifiably and definitely precludes full compliance with the technical rules of [Regulation 1/2005], the margin of discretion conferred on the competent authority of the place of departure empowers it to accept realistic planning for transport which, in the light inter alia of the means of transport used and the journey arrangements made, indicates that the planned transport will safeguard the welfare of the animals at a level equivalent to those technical rules.” (para. 54)

In finding that Regulation 1/2005 also applies to those parts of animal transport taking place outside of the EU, the Court went against the opinion of Advocate General Bot. The AG was indeed of the opinion that the scope of the Regulation was limited to the EU, and that applying it to transport outside of EU borders would essentially deputize the authorities of other countries, requiring them to “check to ensure compliance with the rules laid down by the regulation” (AG’s opinion, para. 54). As Advocate General Bot pointed out, this would be inconsistent with the rules regarding the transport of animals into the EU, according to which transit companies must meet EU animal welfare standards only once they enter EU territory (AG’s opinion, para. 82).

It is particularly interesting to see Zuchtvieh in light of the Court’s other recent case law on the extraterritorial application of EU rules. Traditionally speaking, international law frowns upon extraterritorial regulation, instead deferring to state sovereignty and its corollary, the principle of non-interference in the affairs of other states. Extraterritorial rules are thus only permissible where there is a solid jurisdictional reason for enacting them (for example, because the actors involved are nationals, or the behaviour abroad has domestic territorial effects). In recent years, however, the CJEU has seemed quite willing to use the ambiguity inherent in these jurisdictional terms to permit the application of EU rules that have legislative effects in third states. It has justified the application of such rules outside its borders using what Joanne Scott has helpfully termed “territorial extension”: the practice of using a (potentially quite limited) territorial connection with the EU to justify the regulation of conduct taking place in third states.

In the Air Transport Association case, for example, an association of American air transport companies challenged the EU’s decision to apply its carbon emissions trading scheme to emissions by non-EU planes that took place outside European territory, if those flights landed in the EU. The CJEU found that this was permissible, and should not be seen as violating the prohibition of extraterritorial regulation under customary international law. (ATA para. 157). In the Court’s view, the emissions trading scheme was not ‘extraterritorial’, because it was applied only at airports within EU jurisdiction—regardless of any effects on extraterritorial behaviour. For other examples of broad readings of regulatory jurisdiction by the CJEU, one might look to earlier cases such as Minin, Poulsen, and Ebony Maritime.

Similarly, in Zuchtvieh, the CJEU found that there was no extraterritorial regulation because the permit for transporting the animals in question was issued within the EU. While Advocate General Bot expressed his concern regarding the effects such an interpretation would have on the conduct of transporters and customs officials in third states, the CJEU clearly did not find these issues relevant to its determination.

The Zuchtvieh ruling is expected to have positive effects on animal welfare, improving conditions for the millions of animals transported from the EU to third states every year. In addition to these concrete effects, however, the judgment also demonstrates the increasing tendency of the CJEU to expand the permissible reach of EU legislation to conduct taking place on third state territory.

It remains to be seen whether this trend will continue, and at what point the CJEU will consider that the extraterritorial reach of EU law has reached its limit. One may indeed question the impact of this case on the so-called ‘external dimension’ of EU law, which is one of the key concerns nowadays for EU policy-makers. Is the EU entitled to export its rules/values/fundamental rights standards to other countries? At what point does ‘territorial extension’ become an illegal or illegitimate exercise of EU authority? EU ‘territorial extension’ definitely encounters quite some resistance from the international community. Despite the CJEU’s approval of the emissions trading scheme in Air Transport Association, for example, international backlash against the rule was so strong that the EU agreed to suspend its operation so long as international negotiations on a more global rule were underway. Although Zuchtvieh has thus far not generated a similar protest, it does change the standard international legal conversation about jurisdiction, pushing an expanded understanding of who can and should regulate the behaviour of cross-border economic activities.