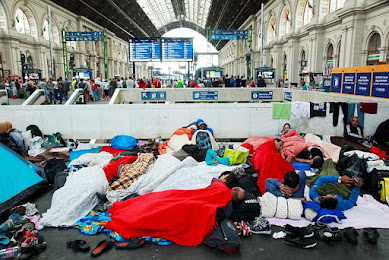 The current instruments of the Common European Asylum System (CEAS), which include the recast Reception Conditions Directive, are applicable since 2013, meaning for nearly a decade. However, already in 2015, the high number of arrivals of asylum-seekers in the European Union (EU) exposed a series of deficiencies, divergencies and gaps in the EU legislation on asylum matters. The harmonization objective lost much of its relevance in the context of the response to the refugee ‘crisis’.[i] The paradox is that the so-called ‘crisis’ happened just two years after the completion of the reform of the CEAS in the summer of 2013. Therefore, the Commission presented in 2015 a new European Agenda on Migration that included both short-term measures and proposals for the long-term.

In the long-term, the European Commission proposed in May and July 2016 a third package of legislation with the aim of strengthening protection for asylum-seekers and imposing greater uniformity in rules and procedures in different Member States. The Commission highlighted in 2016 that the prevention of ‘asylum shopping’ and ‘secondary movements’ was among the top priorities that it aimed to achieve through the reform of the CEAS. In 2016, the Commission presented the second package to reform the CEAS and one of these proposals was the 2016 proposal for a recast Reception Conditions Directive (RCD).[ii] The negotiations started in 2016, and a political agreement between the Council and the European Parliament was reached in 2018. Further attempts at the technical level were made during the Austrian Presidency, but the proposal, as of today, has not been adopted. Actually, none of the 2016 proposed instruments is adopted, to date (besides the EU Asylum Agency), and the negotiations were stalled.

Thus, the Commission in 2020 presented the new Pact on Migration and Asylum in order to boost the negotiations in the Council and propose a ‘fresh start’ on migration. As the recast RCD was one of the instruments where a provisional agreement was reached, the Commission did not amend at all this text through the proposed 2020 Pact on Migration and Asylum. As the Council is currently getting prepared to open again the discussions with the European Parliament on the recast RCD, this blogpost aims to examine the most important amendments of the recast RCD mainly regarding the proposed measures that aim to prevent ‘secondary movements’ and ‘asylum shopping’ which is at the epicenter of the proposed legislation.

To achieve this objective, on the one hand, measures that improve the dignity and integration prospects for asylum-seekers are proposed to ensure that a dignified standard of living is provided in all Member States, and secondly new measures to constrain autonomy and impose sanctions to asylum-seekers are proposed to ensure that the asylum applications will be examined in the ‘first country of asylum’ and ‘asylum shopping’ will be prevented. Specifically, in recital 13 of the recast RCD, it is explicitly mentioned that ‘applicants do not have the right to choose the Member State of application. An applicant must apply for international protection in accordance with the Dublin Regulation’. It is worth clarifying here that the Commission proposed in 2020 to replace the Dublin III Regulation with an Asylum and Migration Management Regulation, but as this has not yet been agreed, I will refer to the Dublin III Regulation for the scope of this blogpost.

It is apparent in the provisional agreement that the aim of the proposed Directive is to enhance integration measures for asylum-seekers and ensure that there are inclusion prospects for them wherever they are required to apply for asylum. In this way, the Commission aims to ensure dignified standards and equal integration prospects in all Member States to ensure the prevention of ‘asylum shopping’ and ‘secondary movements’. For this reason, asylum-seekers will be allowed to work 6 months after requesting asylum, instead of the current 9-month framework (Art. 15). Moreover, it is required to enjoy equal treatment with the nationals as regards the terms of employment and other conditions (art.15 para.3). Asylum-seekers will also have access to vocational training and language courses from day one (art. 15a).  Moreover, those applying for international protection will be entitled to primary and secondary health care, including mental as well as sexual and reproductive health care (art.16). In addition, children should enter the school system no later than 2 months after arrival (Art.14), instead of the current framework that foresees 3 months. All the above-mentioned measures aim to enhance the integration prospects of asylum-seekers to ensure that they will not choose to illegally move to other countries in order to find job or access education. These measures are overall assessed as beneficial for those seeking international protection. However, integration is also dependent on actual employment opportunities, inclusion prospects and the economic situation in the responsible Member State, something that may also be influenced by large-scale arrivals of third-country nationals often witnessed in the EU external border countries.

The most striking example that proves that the main aim of the recast RCD is the prevention of ‘asylum shopping’ and ‘secondary movements’ can be found in the proposed article 17a which explicitly states that where an applicant is present in another Member State from the one that he or she is required to be present, the applicant should not be entitled to material reception conditions, access to labour marker, language courses and vocational training from the moment a transfer decision has been notified to this person. Thus, the reception conditions may actually be reduced or withdrawn with the notice of the transfer decision even if the transfer in reality is taking place later, in some cases even months after the notification of the decision. The only guarantee here is that the withdrawal of the reception conditions should be without prejudice to the need to ensure ‘a dignified standard of living’ including access to necessary health care something which has been reaffirmed from the European Court of Justice. However, how this can be achieved in practice remains controversial.

Furthermore, the possibility of reducing or withdrawing the material reception conditions in case the applicant is required to be present in a specific Member State according to the Dublin Regulation, can be found in the new paragraph 1 of article 19 that concerns the reduction or withdrawal of material reception conditions. Thus, once again it is stated that if the asylum-seeker has ‘illegally’ left the ‘first country of asylum’ and moved to another Member State, she or he may be sanctioned with even the full withdrawal of reception conditions, on the basis of the above-mentioned provision. It becomes evident that the applicant of international protection will be subject to the full benefits and guarantees envisaged in the recast RCD only when she or he is present on the territory of the Member State that the Dublin Regulation defines. In this way, the Commission hopes to discourage ‘secondary movements’ to other Member States as asylum-seekers can enjoy the full sets of rights provided in the recast RCD when they are in the ‘responsible’ Member State in accordance with the Dublin Regulation.

Restrictions on the Freedom of Movement: Prevention of ‘absconding’

Except of the proposed sanctions for the applicants that are required to be present in other Member States on the basis of the Dublin Regulation, the Commission proposes to allow states to have the possibility to decide that an applicant is only allowed to reside in a specific place that is adapted for housing applicants, where the is a risk of absconding, in particular when it concerns a) applicants who are required to be present in another Member State and b) applicants who have been transferred to the Member State where they are required to be present in accordance with the Dublin Regulation after having absconded to another Member State (Art.7). Thus, we notice that a restriction of freedom of movement is allowed to prevent ‘absconding’ and subsequently preventing asylum-seekers from illegally moving to another Member State, even in cases where there is a ‘risk’ of absconding. To add to this, in the definitions envisaged in the proposed Directive, the ‘absconding’ and ‘risk of absconding’ are defined for the first time in the asylum acquis (art.2 (10) and (11)) as until now the ‘risk of absconding’ was defined in the Return Directive. Not only restriction of movement, but even detention may be allowed in accordance with the Dublin Regulation (art.8g).

It is worth mentioning here that the proposal does not only provide for punishments for applicants who are subject to a Dublin transfer, but in the recast RDC, we witness that there are different kinds of residence restrictions that are regulated (see new proposed articles 6a and 6b), which is a novelty in comparison to the current Directive, but the analysis of these restrictions fall outside the scope of this blogpost and have been extensively examined here.

Although in the provisional agreement for a recast RCD, the guarantees are enhanced, and even a ‘dignified living’ shall be ensured in every case, even when the asylum applicant is present in the territory of a ‘non-responsible’ Member State, the possibility of reducing material reception conditions and integration prospects to prevent ‘secondary movements’ should not be underestimated. In the EU asylum policy debate, it is well known that external border countries such as Greece, Italy and Spain insist on more solidarity, mentioning that they cannot shoulder the burden without adequate support, while northern European countries such as Germany or the Netherlands insist on enhancing measures to prevent secondary movements. This was also apparent in the negotiations for the proposed Reception Conditions Directive. However, now that the 2020 asylum and migration instruments are under negotiations, it is important to realise that there should not be a dichotomy between ‘less secondary movements’ or ‘more solidarity’. The discussions over less secondary movements should take place in conjunction with discussions over more solidarity. In the context of enhanced solidarity, the negotiations over the recast Reception Conditions Directive should take place, if the Council decides to open again the consultations, before finally adopting the Directive which contains overall positive amendments that enhance integration prospects, safeguard a dignified standard of living and increase procedural guarantees for applicants with special reception needs.

[i] Giulia Vicini, ‘The EU Refugee Crisis and the ‘Third-Phase’ Asylum Legislation: The End of the Harmisation Approach or Its Revival’ in Valsamis Mitsilegas, Violeta Moreno-Lax and Niovi Vavoula (eds.) Securitising Asylum Flows: Deflection, Criminalisation and Challenges for Human Rights (Brill 2020)