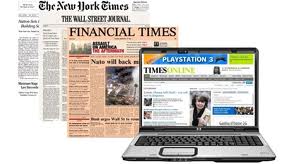 Historically there has been a distinction between regulation of broadcasting and regulation of newspapers, with the latter being subject to much lighter touch regimes, often self-regulatory.  EU law harmonised, with the Television without Frontiers Directive, television broadcasting, with newspapers – insofar as they were caught by EU law at all – being dealt with under the general free movement and competition provisions.  The Television without Frontiers Directive was revised twice, in the face of changing technology and the development of on-line information services, and became the Audiovisual Media Services Directive, harmonising at a minimum level regulation not only in relation to traditional television, but also on demand provision that was ‘television like’.  In this new regime, care was taken to exclude newspapers.  As services have developed, however, the boundary between a ‘text-based’ newspaper and audiovisual has become blurred, as newspaper companies started to expand what was offered, specifically the inclusion of video sections on the newspaper site.  Do such activities still really qualify for the ‘newspaper exception’?  This contentious question arose in a reference from the Austrian courts in the New Media Online case, which the ECJ ruled on yesterday.

NMO was a newspaper company with an online newspaper.  While the site mainly features articles from the written press, it did include a subdomain which provided a catalogue of video clips across a range of topics.  Very few of the videos, some of which were very short, were connected to particular news stories.  The Austrian regulatory authorities found that NMO was providing an on-demand  audiovisual media service within the sense of the AVMSD.  This was challenged before the Austrian courts which referred two questions to the ECJ on the meaning of
·         A ‘programme’ and
·        Audiovisual media service.

As regards the first question, the referring court questioned whether very short clips could be considered equivalent to a programme on tv.  In particular it noted that a broadcaster of television would not put forward such a compilation. The ECJ ruled that the focus of the analysis should be on the programme (or video clip) and not on the way the videos are compiled.  The ECJ then pointed out that there is no minimum length for a programme set down in the AVMSD; further television can include some short programmes.  The ECJ took the keystones of the concept to be their form (that is audiovisual); their audience (a mass audience) and their impact on that audience, in accordance with the interpretation given in Recital 21.  The webservice also fitted within the scope of the definition of ‘on demand media service’ provided in Article 1(1)(g) AVMSD, in that the moment of viewing the programme is chosen by the viewer from a catalogue provided by the supplier (here the index on the website).  On that basis the ECJ concluded that:

‘the manner in which the videos at issue in the main proceedings are selected is no different from that proposed in the context of on-demand audiovisual media services which fall within the scope of that directive’. [21]

In principle, it seems as though the AVMSD would apply, unless the service can be said to fall within the ‘newspaper exception’.  Recital 28 specifies that ‘electronic versions of newspapers and magazines’ lie outside the scope of the AVMSD.  Recital 22 clarifies that audiovisual content which is incidental to another service and do not constitute the services principle purpose do not constitute audiovisual media services within the directive.  Recital 28 in identifying newspaper and magazines is a form of subspecies of this general rule.  We are left with then the question of what is incidental.  The ECJ made clear that

‘recital 28  … cannot be understood as meaning that an audiovisual service must systematically be excluded from the scope of  [AVMSD] solely on the ground that the operator of the website of which that service is a part is a publishing company of an online newspaper’. [28]

This means that whether or not an on-demand service exists must be assessed on a case by case basis.  Indeed, the ECJ highlighted the risk of multimedia companies seeking to evade regulation through a formalistic interpretation of the  AVMSD.  This would be particularly problematic given that one of the purposes of the AVMSD was to create a level playing field between different operators.  This leads to an approach which looks at the website, rather than the nature of the provider.  The test is whether the service is:

‘regardless of the framework in which it is offered, the provision of programmes to inform, entertain or educate the general public’.  [33]

While this is a question of fact for the national court, the ECJ specified that the question is whether the video content has form and content separate from the newspaper content.  Here it was significant that the content was not linked to specific articles; here the form of the website cannot be decisive.  It is rather a question of the links between content.

This case confirms what has been known for a while in the UK, at least: the recital 28 cannot be seen as an automatic ‘get out of gaol free’ card for newspaper proprietors.  What is noticeable about the reasoning is the emphasis on the substance of what is provided rather than formalistic criteria which are capable of manipulation.  The ECJ is conscious of the possibility of abuse and also of the need to ensure consumer (or viewer) protection.   It means that in principle parts of a website could be subject to audiovisual regulation, though it still seems as though the newspaper elements would not be. The difficult question is however where precisely the boundary should be drawn.  It has been suggested (within the UK at least) that separate home pages and separate catalogues for video sections of sites would tend towards a finding of an on-demand service.  Whether the avoidance of such structures (which seemed at least in part present here) would be sufficient is another question.  In this case, the ECJ emphasised firstly that length is not a determinative factor and the need to have links between the content of the newspaper or magazine and the videos.  One might question how close the links to the substance of the newspaper would have to be: would the Max Mosley sex videos link to any story about Max Mosley?