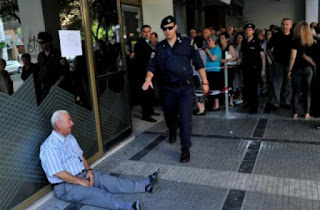 Many EU citizens have watched with sympathy and concern as Greek citizens have been limited to withdrawing €60 a day in the last two weeks. This restriction results from a restriction imposed by the European Central Bank (ECB) on the emergency liquidity assistance which it provides to Greek banks.

Apart from the human impact, there are grave legal, political and economic doubts about the ECB’s action. One of the central purposes of a central bank is to function as a lender of last resort to banks – and the ECB is signally failing to do that here. Also, the ECB’s actions give the impression that it is trying to influence the Greek political debate on austerity and membership of the Eurozone – a role which is well outside the Bank’s remit. The banking restrictions obviously damage the Greek economy, and so limit its ability to pay back its creditors in future.  They have nothing to do with the Bank’s task of fighting inflation, and they undermine its broader role in supporting the EU’s economic growth. (For a fuller critique, see here (paywalled); on the legal background, see here). Arguably these restrictions – or further restrictions which the ECB might impose – could lead toward a de facto ‘Grexit’ from monetary union, which is ruled out by EU law (see my discussion here).

It’s possible to challenge the ECB’s actions via the national courts, which can refer the issue to the CJEU, such as in the recent Gauweiler case (discussed here). They can also be challenged in the EU courts, such as in the UK’s recent successful challenge (discussed here). The case law takes a broad view of what ECB acts can be challenged, except where it acts as part of the ‘Troika’ which negotiates bailout conditions, when neither the Bank nor the Commission can be challenged in the EU courts. But the ECB’s restriction of assistance to Greek banks did not fall within the scope of its role in the Troika.

National governments such as Greece can go directly to the EU courts to challenge ECB actions. Other challengers besides the EU institutions would have satisfy standing rules: ‘direct and individual concern’, or (if they are challenging a non-legislative act which does not entail implementing measures) ‘direct concern’. Arguably it would be easy for a Greek bank to satisfy those rules.

In the absence of a legal challenge from a Greek bank or the Greek government, an individual depositor has brought a legal challenge to the ECB’s recent actions before the EU General Court. You can find the full text of the claim here. The ECB might restore assistance if there is a deal in the near future, but it is still worth challenging its actions, so it cannot do this (or threaten to do it) in future.

Obviously there is a possible problem with standing, although a parallel challenge could be brought in the Greek courts. The plaintiff welcomes any advice or support – contact info@alcimos.com. Or you can leave comments on this blog post.