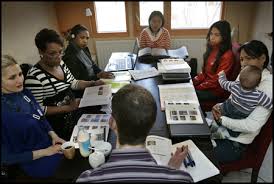 What are the limits – if any – on Member States’ discretion to impose such requirements? The CJEU answered that question for the first time today, in its judgment in K and A.

The Dutch government has implemented the family reunion Directive with an integration requirement: a test on Dutch language and society. There are exceptions for ‘very special individual circumstances’. Family members must pay €350 to take the course, and €110 to buy the study pack. The case concerns citizens of Nigeria and Azerbaijan who had argued that they should be exempt from the course on health grounds, but the Dutch authorities rejected their arguments. They challenged those decisions before the Dutch courts, which asked the CJEU to interpret the Directive.

The Court begins by repeating prior case law which stated that Member States must admit family members to their territory if they meet the conditions set out in the Directive. It then confirms that Member States can indeed impose an integration requirement on applicants for family reunion before entry, unless they are joining a refugee. But the Court applies prior case law by analogy (Chakroun, on the minimum resources requirement in the Directive) to insist that the ‘integration’ condition must be interpreted strictly, and that Member States cannot use it to undermine the main purpose of the Directive: facilitating family reunion.

Next, the Court invokes the principle of proportionality. In this case, it means that any integration measures must be linked to the actual purpose of facilitating family members’ integration. As in its recent P and S judgment on integration measures for long-term resident non-EU citizens (discussed here), the Court accepts that a test on the host State’s language and society is a legitimate way of ensuring integration.

However, the Court emphasises that the conditions relating to the integration requirement can’t exceed its aims. This would ‘in particular’ happen if the requirement ‘were systematically to prevent’ family reunion even though, ‘despite having failed the integration examination, they have demonstrated their willingness to pass’ it and ‘have made every effort’ to do so. The integration tests cannot be aimed at ‘filtering’ family members, but instead must actually help them integrate.

The Court went on to require Member States to consider ‘specific individual circumstances, such as the age, illiteracy, level of education, economic situation or health’ of a family member, ‘in order to dispense’ them from the integration test where those circumstances make the family member ‘unable to take or pass that examination’. Otherwise the test would create a ‘difficult obstacle’ to the family reunion right, and circumvent the requirement to make a ‘case-by-case’ decision on applications. Overall, then, Dutch law on integration measures went beyond the limits imposed by EU law (as interpreted by the Court), since the hardship clause in the Dutch law set out fewer exceptions from the integration requirement than EU law allowed.

Finally, the Court ruled (as in prior judgments on long-term residence) that the Dutch fees were too high, also forming an obstacle to the effective exercise of family reunion, in conjunction with travel costs, considering that they had to be paid also when the test was retaken.

It should be noted that the family reunion Directive doesn’t apply to the UK, Ireland or Denmark. It also doesn’t apply to the non-EU family members of EU citizens. Those people are either outside the scope of EU law (if they join an EU citizen in that citizen’s own Member State), or fall within the scope of the EU citizens’ Directive (if they join an EU citizen in a different Member State). The citizens’ Directive doesn’t allow for any integration requirement. Family members of Turkish citizens are also in a different situation: as discussed here, there is a ‘standstill’ requirement on new restrictions on their family reunion. So new integration requirements can only be introduced on public interest grounds.

Turning to the judgment, it’s no surprise that the Court upheld the validity of integration measures requirements in principle. They are expressly provided for in the legislation and there’s a sound argument that it makes sense for newcomers who aim to settle in a country to learn its language and about its society. But it’s also a potential limit on the right to family reunion.

The Court’s judgment does a good job trying to balance these conflicting principles. Although the Court unfortunately doesn’t mention the right to family life, that right nonetheless suffuses this judgment, as the Court identifies a public interest reason to restrict that right and then subjects this restriction to the principle of proportionality.  So the integration tests must be genuine, not simply an attempt to reduce numbers of new entrants. The Court even suggests that those who are genuinely willing to pass the test and made the effort to do so ought not to be denied family reunion, presumably even if they have not actually passed it.

Indeed, this is a non-exhaustive list of when the principle of proportionality applies (‘in particular’). There is a requirement to consider individual cases and again, the list of circumstances which the Court insists that Member States consider (age, illiteracy, education, finances and health) is not exhaustive (‘such as’). The Court also comes down hard again on the high fees charged to migrants by the Dutch government.

This judgment will be particularly useful to those migrants who have lower incomes and those who come from developing countries, where the level of education is not always as high. (Unlike the Advocate-General, the Court does not discuss the exception from the integration test in Dutch law for migrants from some wealthy countries). While there are good reasons to expect migrants to learn their host country’s language and to know about its culture – for both the sake of both migrants and the host country’s society – there is also a powerful argument that spouses, parents and children should be able to enjoy family life together. In significantly limiting States’ ability to insist that people pass an integration test before they can live with their loved ones, the Court has made the right choice.