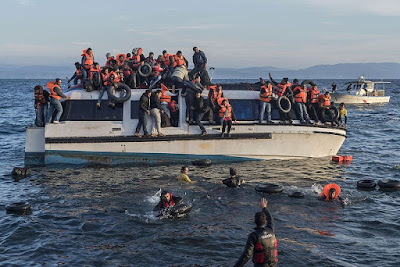 In the middle of one night in January 2016, Salam Aldeen received what had now become a routine call regarding boats in distress off of the coast of Greece. Since co-founding Team Humanity, a volunteer rescue organisation, in September 2015, Aldeen had responded to distress calls from approximately 200 boats with a total of approximately 10,000 refugees on board. As per protocol, Aldeen informed the Greek coast guard that he was going out in search of the boats. Yet on this particular evening, Aldeen and the four other volunteer lifeguards with him never reached the refugees in need of rescue.

When a military ship came threateningly close to their rescue boat, they altered course and headed back to shore. Before they reached land, two military vessels and the Greek coast guard surrounded them, ultimately arresting them and confiscating their boat. Their alleged crime: human smuggling. Their actions: attempting to fulfil the widely acknowledged duty to rescue at sea. Aldeen was released from prison after paying a significant fee, but is unable to leave Greece and is required to check in weekly with the Greek authorities. He awaits trial and faces up to ten years in prison.

The arrest of Aldeen and the four volunteers is far from unique. Deeply entangled within the EU’s robust fight against human smuggling in the current ‘refugee crisis’ is the threat of criminalisation of a range of humanitarian acts, which should not be punished but rather praised. The European Commission (EC) has rhetorically acknowledged the importance of ‘avoiding risks of criminalisation of those who provide humanitarian assistance to migrants in distress’, yet the actions of individual Member States suggest otherwise.

The EC is scheduled to release a proposal by the end of 2016 to ‘improve the existing EU legal framework to tackle migrant smuggling’. As such, it has been reviewing Council Directive 2002/90/EC of 28 November 2002 defining the facilitation of unauthorised entry, transit and residence (Facilitation Directive), legislation that governs human smuggling in addition to other acts facilitating the transit and stay of irregular migrants. Given the much-needed review of the Facilitation Directive and the current strategy to combat abhorrent and ‘humanitarian’ acts of smuggling alike, it is a critical moment to reflect upon the moral quality and complexities of human smuggling.

I offer five observations as a preliminary framework for considering the deficiencies in the Facilitation Directive and where the boundary between blameworthy acts of smuggling and blameless acts of ‘humanitarian smuggling’ should be drawn. These observations stem from my recently published research through the Refugee Studies Centre, The ‘humanitarian smuggling’ of refugees: Criminal offence or moral obligation?

1. Combatting human smuggling and all humanitarian acts construed as such are in service of the larger goals of deterring and securitising irregular migration.

The EU is employing all possible tactics to deter refugees and migrants from attempting to reach its Member States’ shores – from the United Nations Security Council Resolution permitting EU security forces to intercept vessels suspected of human smuggling off the coast of Libya, to the deployment of NATO warships in the Aegean Sea, to the EU-Turkey deal to send those arriving irregularly back to Turkey. These policies of deterrence and securitisation are neither ad hoc nor unprecedented. Rather, they are integral to EU law governing irregular migrants and those who assist them.

Notably, the Facilitation Directive is first and foremost concerned with deterring irregular migration. As the first paragraph of the Directive states: ‘[o]ne of the objectives of the European Union is the gradual creation of an area of freedom, security, and justice, which means, inter alia, that illegal immigration must be combatted’. Prohibiting the facilitation of irregular entry is merely one means to combat irregular migration. As Spena argues, ‘[p]aradoxical as it may seem, in the Facilitation Directive’s approach, smuggling, as a form of facilitation, is only wrongful in an ancillary way, as if it was only a form of complicity in the real wrong which is the wrong of irregular migration’. The focus on deterring irregular migration produces a disregard for the smuggled migrants themselves, highlighted by the fact that the Directive does not define its relationship to international human rights or refugee law.

2. The Facilitation Directive, as transposed into national law, permits the criminalisation of genuinely humanitarian acts.

The infringements set out in the Facilitation Directive mirror its expansive intent to sanction, most regularly through criminal law, a wide range of activities that may support irregular migration. Article 1.1.a stipulates that Member States:

Article 1.2 includes an optional ‘humanitarian clause’, which applies only to Article 1.1a such that ‘[a]ny Member State may decide not to impose sanctions...where the aim of the behaviour is to provide humanitarian assistance to the person concerned’.

The majority of Member States have transposed Article 1.1a expansively, permitting the criminalisation of a broad range of individuals facilitating irregular entry – from members of smuggling rings putting refugees in deliberate danger to volunteers rescuing refugees in peril at sea. The optional humanitarian exemption ultimately permits the criminalisation of what seems to be a limitless spectrum of activity at the national level, failing to enable subjects to orientate their behaviour accordingly and even prohibiting ethically defensible, if not praiseworthy, acts like those of Aldeen. According to a 2014 report by the Fundamental Rights Agency, the optional ‘humanitarian clause’ has been explicitly transposed in a variety of forms at the national level in only eight Member States.

3. The historic example of the rescue of the Danish Jews during World War II clearly illustrates, with the benefit of hindsight, the moral necessity and praiseworthiness of certain acts of smuggling.

The current ‘refugee crisis’ is regularly referred to as the largest crisis since World War II. Equally, international cooperation to resettle refugees in the aftermath of WWII is frequently invoked as a response that should be emulated today. Less frequently invoked, however, are those ‘humanitarian smugglers’ – known today simply as heroes - who rescued Jews from persecution long before the international community stepped in.

In 1943, 95% of the Jewish population in Denmark was able to escape deportation to concentration camps, in large part due to the collective action of fellow citizens and the Danish resistance movement. When the Nazi regime formalised the order to deport Danish Jews to concentration camps in September 1943, within two weeks Danes mobilised to successfully smuggle more than 7,200 Danish Jews and 680 non-Jewish family members to safety in Sweden, predominantly by way of Danish fishermen.

Those individuals who effectively evacuated almost the entire Jewish population out of Denmark not only made an assessment of the likely consequences and certainty of the impending harm for the Danish Jews if they did not act, but also accepted significant risks to their own lives as a result of their actions. If caught by the Nazis, those who aided and abetted Jews faced criminalisation and even possibly execution. The heroic rescue of the Danish Jews from impending deportation to concentration camp is but one reminder of the historical continuity, praiseworthiness, and unfortunate necessity of ‘humanitarian smuggling’.

4. The drafters of the 1951 Convention Relating to the Status of Refugees (Refugee Convention) considered including a safeguard against penalisation for individuals assisting refugees to cross borders irregularly on humanitarian grounds.

In light of the expansive scope of the Facilitation Directive and the threatened criminalisation of humanitarians like Aldeen, it may come as a surprise that some of the drafters - in particular the Swiss government - recognised that safeguards should exist not only for refugees, but also their rescuers. According to the French representative, organisations assisting refugees to reach safety were engaging in ‘an obvious humanitarian duty’. The French government was nevertheless opposed to modifying the language of Article 31, fearing it would encourage refugee organisations to become ‘organisations for the illegal crossing of frontiers’. Similarly, the United States representative acknowledged that the failure to include a safeguard for those proving humanitarian assistance to refugees irregularly crossing borders might be ‘a possible oversight in the drafting of the article’. Yet, the United States government did not support including protections for those providing assistance.

There is, of course, no safeguard for ‘humanitarian smugglers’ in the Refugee Convention. Yet, there was a recognition that governments should not – and a false assumption that they would not - criminalise those assisting refugees for humanitarian reasons.

The November 2015 Supreme Court of Canada (SCC) case, R v. Appulonappa, sets a legal precedent for a narrower smuggling prohibition. The SCC ruled that its law criminalising smuggling, S. 117 of the Immigration and Refugee Protection Act, was overbroad and should be ‘read down…as not applying to persons providing humanitarian aid to asylum-seekers or to asylum-seekers who provide each other mutual aid (including aid to family members)’. S. 117 is not dissimilar to Article 1.1 of the Facilitation Directive in that it theoretically criminalises anyone who facilitates irregular entry, regardless of motive or the means by which the act is carried out.

The SCC ruled that S. 117 exceeded its legislative intent of criminalising organised crime: ‘[a] broad punitive goal that would prosecute persons with no connection to and no furtherance of organised crime is not consistent with Parliament’s purpose’. Possible amendments to S. 117 may serve as a model for a more narrowly drafted prohibition that more accurately delineates between blameless and blameworthy acts of smuggling.

These five observations offer entry points into the moral complexities of human smuggling and the legal imperative of decriminalising humanitarian acts of the facilitation of irregular entry. Ultimately, if the EC intends to provide recommendations to amend the Facilitation Directive that reflect the need to avoid criminalising humanitarian assistance to irregular migrants, it will first need to more narrowly and clearly define acts of the facilitation of irregular entry worthy of criminalisation. The EC’s challenge lies with the fact that the primary purpose of the Facilitation Directive is to deter irregular migration and a narrower directive would ultimately undermine this objective.

In the current crisis, human smugglers – and all individuals deemed as such – have become Europe’s scapegoat. Targeting human smugglers worthy of criminalisation and those ‘humanitarian smugglers’ worthy of praise is Europe’s Band-Aid solution to a problem that can only be solved through safe and legal pathways for refugees to reach Europe.