‘Inside’ the European Parliament’s Closed Reading Rooms: Transparency in the EU 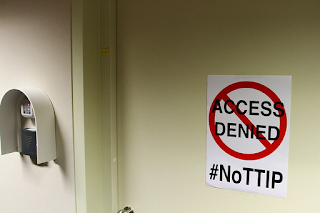 Dr Vigjilenca Abazi
Assistant Professor of European Law
Maastricht University
What do documents about negotiations of the Transatlantic Trade and Investment Partnership (TTIP), oversight of the EU’s Food Safety Authority or Tax-Justice have in common? In order to access these documents, (selected) Members of the European Parliament are requested to attend closed reading rooms. This blog post discusses how an exception to open parliamentary oversight is increasingly becoming a regular institutional practice and questions its spillover effect on requests for public access to documents.

As the wording suggests, ‘closed reading rooms’ are meetings that take place behind closed doors with the purpose of reading certain sensitive documents, particularly EU official secrets. Documents are distributed at the beginning of the meeting and collected again at the end; documents may not be copied by any means, such as photocopying or photographing; no notes may be taken; and the minutes of the meeting cannot make any mention of the discussion of the item containing official secrets (Art. 6, Interinstitutional Agreement between the European Parliament and the Council of 12 March 2014).

Closed reading rooms are an exception to generally open meetings and discussions of the European Parliament. This practice emerged with the introduction of rules on EU official secrets and specifically the Interinstitutional Agreement of 2002 between the European Parliament and the Council concerning European Parliament’s access to sensitive information in the field of security and defence policy (see Art. 3 and Annex, second paragraph). The rationale of what this Agreement called ‘secured room’ was to make sensitive documents available for purposes of parliamentary oversight without ‘risks’ of public disclosure or possible leaks, i.e. unauthorised disclosure of documents.

At first glance, closed reading rooms, or more generally ‘closed oversight’ (as I have elaborated in-depth in this recent article), might seem an inevitable institutional practice when dealing with official secrets and certainly this is not an issue confined to the EU, but a much wider world practice of oversight (e.g. see here for a recent report). Yet, the following salient questions arise:
Is it possible to keep account of closed oversight?

Accountability does not stop with executive institutions. It is equally important that oversight actors, such as the European Parliament, have appropriate institutionalised processes of keeping track of documents that have been reviewed, that meeting minutes reflect at least in some broad sense what has been discussed when official secrets are involved, or any other means that leave a traceable mark of institutional oversight having taken place. As the current procedure of getting access to official secrets stands (see above section on ‘background), it seems that keeping (some sort of public) track of the oversight process is deeply challenging.

Another disconcerting aspect to closed oversight is the way it has been developed, i.e. mostly through rules of procedure and inter-institutional agreements. Indeed, EU institutions in line with primary law have clear prerogatives to make arrangements for their cooperation and to set out their rules of procedure (see respectively Art. 295 TFEU, Art. 240(3) TFEU). However, it remains to be more critically discussed whether this route of designing how oversight will take place in practice follows the constitutional principle of openness in the EU in full spirit and to what extent it alters the process of oversight in EU.

In a series of recent cases, the CJEU has clarified the relevance, scope and procedural aspects of institutional access to information by the European Parliament in the context of international negotiations (see previous EU Law Analysis blogs here and here). However, case law does not address the manner in which these documents should be read and importantly, primary law only refers that accessibility to information is ‘immediately and fully’ (see Art. 218(10) TFEU) with no further details as to how access ought to be organised.

What about public deliberation?

A crucial role for the European Parliament as the direct representative of citizens (Art. 10 TEU) is to provide a link between what takes place in Brussels and what citizens know. But actively creating space for public deliberation and prompting public debate on issues that are overseen behind closed doors remain yet to be delivered by the European Parliament.

Recently four MEPs filed a public access request to the European Food Safety Authority to gain access to unpublished studies determining the carcinogenicity of glyphosate on basis of which EFSA made its assessments. EFSA was not immediately open to provide public access to these studies. Remarkably, in its response, EFSA offers a ‘physical reading room’ for the MEPs to read these studies and reasons that the owners of these studies seem open to sharing the studies in this manner.

The EFSA response is ongoing and the four MEPs have still not received access to all requested documents. Yet, beyond this case, is the practice of closed reading rooms expanding not only to institutional access but also to public access to documents? This is a issue that we should continue to examine more closely.