The Missing Piece in the European Agenda on Migration: the Temporary Protection Directive 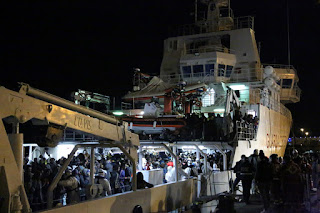 The EU’s Temporary Protection Directive entered in force in 2001 and was the first EU directive on international protection adopted after the Treaty of Amsterdam entered into force in 1999. The Temporary Protection Directive has introduced a practical and efficient framework to deal with mass influx situations by formalising and harmonising the protection standards to be introduced in mass influx situations. Yet, the Directive has so far never been implemented; the Council considered activating it when the number of asylum-seekers from Iraq and Afghanistan rose in the beginning of 2000s but no decision finally ensued (see Klug, in Further Reading). Similarly, the Directive was not implemented following the substantial influx of asylum-seekers fleeing the Arab Spring conflicts which overwhelmed the asylum capacities of the Member States at the external borders of EU (see Nascimbene and Di Pascale, in Rurther Reading). As for the recent migrant crisis in the Mediterranean, there is no mention of the Temporary protection directive in the European Agenda on Migration. This post argues that the Temporary protection directive could have been, and still can be, implemented as part of a more effective response to cope with the irregular arrival of mixed flows through Mediterranean and it should be incorporated to the EU Agenda on Migration (for the latest on that Agenda, see here).

Lack of implementation of the Directive in the past 14 years

The Temporary Protection Directive has an activation mechanism; for the Directive to be activated, in other words, for it to be implemented, the existence of a mass influx situation has to be established by Council decision adopted with a qualified majority (Art 5(1) of the Directive). The activation process of the Directive can be triggered by a Member state. Upon a State’s request, the Commission can propose activating the Directive. Nonetheless, such a proposal has to be discussed and adopted by the Council with a qualified majority vote (recital 14 and Art 5 of the Directrive). While the European Commission is the only EU organ that can submit such a proposal, and is the only organ that has the right to propose specific groups that will receive temporary protection, the Council has the exclusive authority to determine these groups (see Arenas, in Further Reading).

The Directive defines such a mass influx situation as the “arrival in the community of a large number of displaced persons, who came from a specific country or geographical area, whether the arrival in the Community was spontaneous or aided, for example through an evacuation programme” (Art 2(d)). Although the existence of a mass influx is the key for the activation of the Directive, the term ‘arrival of large number of displaced persons’, formulated to indicate the existence of mass influx, is very vague (as Arenas notes). However, the Commission proposal can be explored in order to clarify the meaning of the term ‘mass influx’. This notes:

Influx must be from the same country or geographical area […] the number of people must be substantial[…]the gradual arrival of asylum-seekers, refugees or displaced persons from a single country or region of origin cannot in itself justify the introduction of such temporary protection. However, a point may come at which the movement of people, gradual at the outset, intensifies in such a way that it becomes massive and the normal asylum system is unable to absorb the flow.

In view of this statement and taking into account that one of the initial purposes for drafting the Directive was “avoiding a total bottleneck in national asylum systems”, the inability of the national asylum system to cope with large groups of people seeking refuge is an important indicator of the existence of a mass influx situation. As seen from the Proposal, the possibility of cumulative influx is not disregarded by the Commission. Thus, the gradual arrival of persons seeking refuge to the member states when it disrupts the operation of national asylum systems can indicate the existence of a mass influx situation.

Can the Temporary protection directive be implemented to cope with mixed flows?

Under Article 2 of the Temporary protection directive, people fleeing armed conflict, violence, and systematic human right violations are among those intended to be protected within the Directive. In addition to this, the Commission proposal refers to the Directive as a document to deal with the large-scale influx of ‘asylum seekers’. Among mixed flows, there is a substantial number of persons who would fall under the category of Article 2 of the Temporary protection directive. Thus, as long as the Council determines that arrival of the discussed mixed flows constitutes a mass influx situation, I believe there is no obstacle for the Directive to be invoked to cope with mixed flows or to protect a smaller subcategory of persons such as those fleeing armed conflict, violence and systematic human rights violations.

Do the mixed flows arriving by sea in Europe constitute a mass influx situation?

Thousands die every year in the Mediterranean Sea trying to reach European shores. According to the UNHCR, “[i]n mid-April 2015, 800 people died in the largest refugee shipwreck on record, highlighting a staggering increase in refugees and migrants dying or missing at sea”, and [vii] the number of refugees and migrants arriving by sea in Europe was 219 000 in 2014 (137,000 as of June 2015). It is crucial that we acknowledge that these people are not mere economic migrants but many among those are fleeing war, violence and human rights violations. These numbers may seem insignificant compared to two million Syrians being protected in Turkey. Yet, we need to also take into account that reception and asylum capacities of Greece and Italy.

The collapse of the Greek asylum system and the consequences of this collapse are evident from the judgments in N.S  and M.S.S. v. Belgium and Greece. In one of its recent judgments (Tarakhel v. Switzerland, discussed here and here), the ECtHR decided that, although the situation in Italy is not the same as Greece, it raises serious doubts as to the current capacities of the Italian asylum system.[viii] As evident from these judgments, the lack of solidarity in the EU in addition to the unfair asylum distribution criteria provided in the Dublin Regulations have increased the asylum pressure on states including Greece, Italy and Malta and, as a result, the reception capacities and quality of protection offered in these states to asylum seekers have diminished.

States at the external borders of the Union are under constant pressure and have been seeking assistance from the EU to find solutions to these arrivals. So far, the EU has, however, not been able to formulate and implement a comprehensive plan to secure the safety of irregular migrants and refugees arriving by boat and some Member States cannot provide persons seeking refuge adequate reception conditions as prescribed by EU Law. Considering the high number of persons arriving at the shores of Italy and Greece irregularly by sea to seek refuge each month and the inadequate reception and asylum capacity of these states, can we still say there is no mass influx situation? No we cannot. In light of these points, it is possible define the ‘mixed flows’ arriving by sea in Europe as a mass influx situation.

The added value of implementing the Temporary Protection Directive to cope with the irregular arrival of ‘mixed flows’ lies within its flexible eligibility criteria and its broad personal scope; its fine harmonization and formalization of the protection standards to be offered to temporarily protected persons, as well as its burden sharing mechanism.

Many authors acknowledge that implementation of the Temporary protection directive could have improved and still can improve the response of the European States as well as the EU to the refugee crisis in Iraq and Syria, and implementation of the Directive could also provide better protection for Iraqis and Syrians fleeing war and violence (see Akram et al and Orchard et al). Agreeing with their view and advancing this idea,  I argue that implementation of the Temporary protection directive can help member states to more effectively cope with the ‘mixed flows’ and provide better protection for persons in need of international protection among mixed flows arriving by sea in Europe. Having said that, the Directive alone will not be able to solve all the problems related to mixed flows. However; it can be a part of the solution and provide important benefits to persons seeking refuge in the EU.

In the light of this added value of implementing the Temporary Protection Directive to cope with the mixed flows arriving by sea in Europe, I argue that the Temporary protection directive should be part of the EU Agenda on Migration.


[1] This post builds on M. Ineli-Ciger, ‘Has the Temporary Protection Directive Become Obsolete? An Examination of the Directive and its Lack of Implementation in View of the Recent Asylum Crisis in the Mediterranean’ in C. Bauloz, M. Ineli-Ciger, S. Singer, V. Stayanova (eds), Seeking Asylum in the European Union: Selected Protection Issues Raised by the Second Phase of the Common Asylum System (Brill/ Martinus Nijhoff Publishers 2015) 225.

A. Klug, ‘Regional developments: Europe’ in A. Zimmermann (ed) the 1951 Convention Relating to the Status of Refugees and its 1967 Protocol: A Commentary (OUP 2011)133.
B. Nascimbene, A. Di Pascale, ‘The ‘Arab Spring’ and the Extraordinary Influx of People who Arrived in North Italy from North Africa’ (2011) 13 EJML 346, 347.
N. Arenas, ‘the Concept of ‘Mass Influx of Displaced Persons’ in the European Directive Establishing the Temporary Protection System’ (2005) 7 EJIL 447.