Can EU law make an effective contribution to the prohibition of forced labour by the ILO? 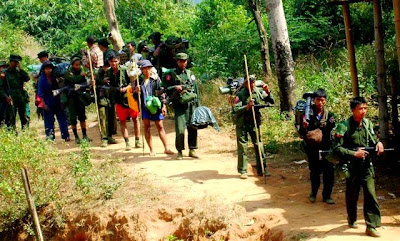 
While many employees jokingly refer to themselves as ‘wage slaves’, millions of people worldwide are actually forced to supply their labour – a modern form of slavery. Alongside sexual exploitation, labour exploitation constitutes a particular form of trafficking in persons.

In recent years, the chief international actors combatting trafficking in persons have been the United Nations (adopting a Protocol to the Convention on Organised Crime), and (within Europe), the Council of Europe, adopting a Convention on the topic. However, there is another long-standing actor in the field: the International Labour Organisation (ILO), which has particular expertise as regards labour exploitation. Due to concerns that its existing treaties, notably Convention 29 of 1930, are not being fully applied (see the 2013 experts’ report for details), the ILO is considering the adoption of a Protocol and/or a Recommendation relating to that Convention in the near future.

The draft Protocol consists of only six short Articles. It starts with a general obligation for States to prevent and eliminate forced labour, and then sets out a more concrete obligation to adopt action plans to this end. States would have to take ‘specific action against trafficking in persons’ as regards labour or sexual exploitation. They would also have to take steps to educate the public, to broaden the coverage of labour law and strengthen inspection services, and to protect workers who use placement services, particularly migrant workers, against abuse.

Next, States would have to secure the identification, recovery, release and rehabilitation of victims of forced labour. They would also have to secure access to remedies for victims, including compensation. Victims would also have to be exempted from liability as regards crimes which they were forced to commit. Finally, there would be a general obligation for States to cooperate with each other, and the Protocol would specify that States would enforce its rules by means of national law.

As for the draft Recommendation, it sets out further details as regards the substance of the draft Protocol. It includes provisions on: gathering statistics relating to forced labour; skills training for vulnerable groups; programmes to combat related discrimination; the promotion of freedom of association for at-risk groups; setting out terms and conditions of work in a contract; basic social security guarantees; pre-departure orientation for migrants; coherent labour and immigration policies, which take account of the risks posed to irregular migrants; and efforts to reduce the trade in and demand for goods and services produced by forced labour.

The provisions on victims’ protection would be conditional on victims’ informed consent, but conversely could not be conditional on their willingness to participate in criminal proceedings. There would be more details on the specific forms of protection which should be granted to victims (protection from retaliation, housing, health care, privacy, and social assistance). For migrants, there should be a reflection and recovery period, the provision of residence permits ‘as appropriate’ and the facilitation of ‘preferably’ voluntary repatriation.

As regards access to justice, there should be rules allowing representatives to act on behalf of victims, a right for victims to get compensation from perpetrators, (state) compensation schemes, information for victims, and access to court. Enforcement rules should include providing for penalties, including confiscation of profits alongside penal sanctions and liability for legal persons.

But how does this relate to EU law? The EU has not comprehensively regulated forced labour as such, but a number of separate EU measures do touch on aspects of the issue. In particular, an EU Directive adopted in 2011 regulates the criminal law aspects of trafficking in persons, while a 2004 Directive regulates the immigration status of trafficking victims. The 2012 Crime Victims’ Directive concerns the status of victims of crime more generally. There is also EU employment law dealing with the issue.

The normal rule relating to EU external competence is that the adoption of internal EU legislation on an issue brings with it external EU competence relating to that issue. That competence becomes exclusive where the EU has fully harmonised the issue in question (see Article 3(2) TFEU). On that basis, the EU has concluded the relevant Protocol to the UN Convention, although it has not signed the Council of Europe Convention on trafficking in persons.

However, there is a complication as regards the planned ILO measures, or indeed any measures emanating from the ILO. Unlike many of the treaties drawn up within the framework of the United Nations or the Council of Europe, only States can be party to ILO legal instruments. This also means that the EU as such cannot fully take part in ILO discussions, even when they concern matters within the scope of EU external competence.

Similarly, the Commission has recently proposed a Council Decision harmonising Member States’ positions as regards the planned ILO Recommendation on forced labour, as well as a separate proposal as regards the possible Protocol (the latter proposal has not been published).

But this process, which is also applicable in other cases where the Member States act on the EU’s behalf in international fora, is not always smooth. For instance: the Commission successfully sued Greece for infringing EU external competence as regards maritime security, within the framework of the International Maritime Organisation; the CJEU has been asked to decide whether the EU has to authorise Member States to admit new countries as parties to the Hague Convention on Child Abduction; and the Court also had to settle a dispute relating to competence relating to earlier ILO treaties on the use of chemicals at work.

More fundamentally, in a pending case, Germany is suing to annul a Council Decision coordinating Member States’ positions in an international wine organisation on behalf of the EU, arguing that the EU’s powers to establish positions in international bodies can only apply where the EU itself is a party to the relevant organisation and/or treaty, not where the Member States are acting on the EU’s behalf. Germany also argues that the EU’s powers can only apply where the organisation concerned will establish legally binding rules; this could arguably be relevant as regards the draft ILO Recommendation.


If the German case is successful (an Advocate-General’s opinion is due in May), then the new proposal obviously cannot be adopted (or would be invalid, if it had been adopted in the meantime). But even if the EU is legally entitled to coordinate Member States’ positions in international conferences, including as regards recommendations, there are several complications resulting from this process.

First of all, the Commission proposal does not mention the difficulty arising from the various opt-outs from EU law which some Member States enjoy. The immigration and criminal law measures referred to do not bind all Member States, while the employment law measures do. So arguably two different Council Decisions might be necessary, in order to address this problem.

Secondly, there might be arguments about the precise extent of the external competence of the EU as compared to the proposed ILO measures. In this case, there are some detailed problems with the Commission proposal, although it is too early to say whether the Council might amend or refuse to adopt the proposal. (For more details of these problems, see the annex below.)

Thirdly, if the EU itself is not party to an international treaty, then the CJEU takes less account of that treaty. Although it has made brief reference to ILO treaties which EU legislation implements (for instance, the Schultz-Hoff judgment on the EU’s working time Directive), this can be compared to (for instance) its more frequent references to the UN Convention on the Rights of Disabled Persons (which the EU has ratified): there have been two such references in the past year (the Ring case and the Z case).

Fourthly, it sometimes appears as if the institutional arguments over the exact extent of the EU’s external competence take precedence over the substance of the treaty concerned. In this case, the substance of the planned measures on forced labour are extremely important, given that millions worldwide are subject to this severe breach of human rights. Moreover, the EU could usefully take this opportunity to reflect on whether its own legislative framework is sufficient to address this problem.

Unfortunately, since the EU would not be a party to the planned Recommendation or Protocol, it would not be required to carry out such a reflection. And conversely, even if Member States become parties, there is a limit to the effectiveness of any such reflection, given that some of the measures concerned can only be taken by the EU.

While the division of powers between the EU and its Member States in external relations is an inevitable consequence of the rules on EU competence, there is a growing need for the EU and its Member States to find an effective mechanism to ensure that their potentially important contribution to achieving international objectives, such as (but not only) the elimination of forced labour, are not frustrated by the EU’s internal disputes.

The EU has found some creative solutions to these problems, such as the use of ‘mixed agreements’ (treaties which the EU and its Member States are both parties to), and the adoption of EU legislation regulating Member States’ exercise of their external competence in areas closely related to EU law (such as air services agreements). It is long past time for it to adopt measures which effectively coordinate the Member States’ and the EU’s exercise of their competence as regards the legal framework for international human rights protection.

The Commission proposes legal bases relating to criminal law and employment law to adopt the Council Decision. But the preamble also refers to EU immigration legislation and rules on free movement of EU citizens, so the relevant legal bases (Articles 45 and 79 TFEU) logically have to be cited, particularly the immigration legal base given the very close link with the EU legislation concerned. Since the immigration and criminal legislation does not apply to all Member States, arguably there will need to be separate Council decisions to take account of this.