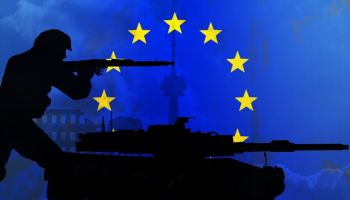 The Prime Minister’s big speech in Florence has received the most attention in recent weeks, but it’s also worth looking at the UK government’s recent papers on its planned EU/UK close partnership after Brexit.  I’ll look here at the papers on two aspects of security – external security (foreign policy and defence) on the one hand, and internal security (police and criminal law cooperation) on the other. Both of them are impacted in the short term by the Florence speech, since the Prime Minister called for the current UK/EU security arrangements to apply for a period of around two years, followed by a comprehensive EU/UK security treaty. Assuming that such a transition period is agreed, the issue is what happens after that. In other words, what will be the content of that future comprehensive security treaty?

The UK government's foreign policy paper devotes much of its space – the first 17 pages – to explaining the UK's major commitments in this field, including via its EU membership. A Martian reader would assume that the UK was applying to join the Union. Only the last few pages discuss the government’s preferred policy – which is both rather vague and highly resembles EU membership.
In short (although there’s no long version), the government seeks to maintain a relationship with the EU in this field that’s closer than any other non-EU country – although without offering many specifics. The government does, however, state that it wants to contribute to EU defence missions and to align sanctions regimes with the EU. The point about sanctions is particularly relevant, since the UK provides intelligence to justify their imposition and some of the individuals concerned have placed their assets in the UK.

For instance, in the recent ECJ judgment in Rosneft (discussed here), which followed a reference from the UK courts, the sanctioned company tried to reopen the case to argue that the referendum result already meant that EU sanctions ceased to apply in the UK. The ECJ simply replied that the Russian company had not explained how the Brexit vote altered the jurisdiction of the Court or the effect of its judgments.

Of course, the legal position will certainly change from Brexit Day: the UK government plans to propose a new Bill regulating post-Brexit sanctions policy in the near future, following a White Paper on this issue earlier this year (see also the government response to that consultation). One key question will be whether that Bill already attempts to regulate the UK’s post-Brexit coordination with the EU on sanctions, or whether that will be left to the Brexit negotiations to address.

This brings us to the issue of the ECJ, which is a difficult question as regards many aspects of the Brexit talks. In principle, in the area of foreign policy and defence, Brexit talks should not be too complicated by ECJ issues, since the Court has only limited jurisdiction. However, as the case of Rosneft illustrates, it does have jurisdiction over sanctions issues. In fact, there are frequent challenges to EU sanctions and many challenges are successful, so there will be a risk of divergence between EU and UK policy after Brexit that may need to be discussed. Such divergence could lead to a knock-on complication with capital movement between the UK and EU.

The paper also covers development and external migration policy, where the UK again seeks something which is both vague and much like membership – collaboration on coordinating policy. While the EU has its own development policy, Member States are free to have their own policies, subject to loose coordination – which is what the UK is aiming for as a non-member.

This was, perhaps, a missed opportunity here to touch on the most difficult issue in the talks: the financial liabilities upon leaving in the EU. Some of the EU’s spending in these areas is not part of the ordinary EU budget (as the ECJ has confirmed), although it is part of the EU negotiation position. So the UK could have addressed that issue to move talks along and to make links between ‘upfront’ and ‘future’ issues to get around sequencing problems in the Brexit talks. (The Prime Minister’s subsequent speech in Florence did not explicitly mention these funds). Furthermore, the UK government could have used this paper to reassure some febrile people that it will have a veto on what it chooses to participate in, as well as on the ECJ.

In many ways, the government paper on criminal law matters is similar to the foreign policy paper. It also starts out by saying how useful the current relationship is, for instance as regards data on wanted persons and stolen objects uploaded into the Schengen Information System, the use of the European Arrest Warrant for fast-track extradition, and the EU police intelligence agency, Europol.

What happens after Brexit? The UK paper correctly points out that the EU already has agreements in this area with many non-EU countries, particularly as regards the exchange of policing data but also as regards some forms of criminal justice cooperation. But as with foreign policy and defence, the UK wants a distinctive relationship after Brexit, given the existing close links.

Again, however, the actual content of what the UK wants is vague. Which of the current EU laws in this field which the UK has signed up to (for a summary of those laws, see my referendum briefing here) would it still like to participate in? The only clear point is that the government doesn't want direct ECJ jurisdiction. In principle, that should be fine for the long term, since the EU27 negotiation position only refers to the ECJ during a transition period. There’s no insistence on using it afterward, which is consistent with EU treaties in this field with non-EU countries.

However, some of those treaties refer to taking account of each other’s case law, and dispute settlement or (in some treaties) possible termination in the event of judicial or legislative divergences. The UK paper gives no idea of how it will tackle those issues, whereas the recent paper on the parallel issue of civil litigation (discussed here) at least indicated a willingness to require UK courts to take account of relevant ECJ rulings.

The contrast between the importance of these issues and the vagueness with which they are treated is striking. Imagine a television viewer aching to watch Tenko or Broadchurch – but having to settle for Last of the Summer Wine. It is fair to assume that the government has more detailed plans than this but doesn't want to release them; but presumably anything more specific would have opened division in the cabinet or run the perceived risk of making the government look awkward by disclosing an ultimately unsuccessful negotiation position (what the government refers to as undermining negotiations). Increasingly these papers look like an attempt to respond to poor polls about negotiations rather than a contribution to the talks.

The government does have a point, however: the UK and EU have significant shared interests in this area, and the UK has a lot to offer, in terms of its defence contribution, supply of intelligence and round-up of fugitives from other Member States, for instance. Of course, the UK benefits in turn from having swifter access to other countries’ intelligence, as well as fast track extradition and transfer of criminal evidence.  The Brexit process might also be an opportunity to address the civil liberties concerns that sometimes arise about these measures, but there is no detailed discussion of that.

It will likely be awhile before these issues are discussed in detail in the talks, and it remains to be seen how interested the EU27 side is in the UK government’s position. But at first sight, it seems possible that the future of the EU/UK relationship on security issues will not be vastly different from the present.