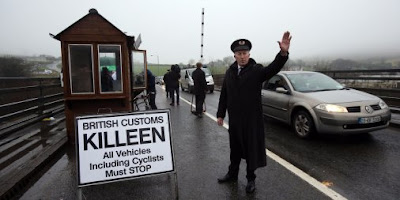 On 16 August the UK government’s Department for Exiting the EU (DEXEU) posted its long awaited position paper on the position of Northern Ireland and Ireland after Brexit. The government itself states that the paper needs to be considered in combination with the “Future Partnership Paper” on Custom’s arrangements, while no mention is made of EU citizens’ rights, which – alongside the situation of Northern Ireland and Ireland and the UK’s financial obligations - also are a priority under the EU’s strategy to negotiate the withdrawal agreement. For a first appreciation of this position paper it is worthwhile highlighting what they do not address.

Its first part addresses the Belfast Peace Agreement, concluded on Good Friday 1998, with three very specific negotiation proposals: EU support for the peace process should be maintained, citizenship rights set out in the Belfast agreement should be maintained, and EU financial aid for the Peace process should be maintained. Two of these issues are at best loosely related to the UK’s withdrawal from the EU. The EU is engaged in numerous peace processes beyond its borders, and there is no reason why it should stop engaging in the Northern Irish peace process. The question whether Ireland grants citizenship to persons born in Northern Ireland is not even within the EU competences: the Treaty on European Union does not determine who Member States may recognise as citizens. These proposals do not mention the EU citizenship dimension at all, as they remain purely on the national level. One wonders why the continuation of EU funding for the peace process in Northern Ireland is not included in the negotiations on the UK’s financial liabilities: if the UK does not wish to continue paying in the EU budget, a division of responsibilities on the funding for this budget would seem more logical –if only to avoid the impression that the bill may be addressed to the EU alone.

What is missing here? Interestingly, the negotiation position only mentions the Belfast Agreement. This was only the first step in a longer process overcoming conflict in Northern Ireland, aiming at an all-Ireland economy and society (North South Dimension) as well as integration across the British Islands (East West Dimension). The success of such a process requires socio-economic and civic integration, alongside political institutional cooperation. Among the agreements complementing the Belfast agreement the Stormont House Agreement adds some of those aspects, for example by stressing the need to overcome discrimination on grounds of ethno-religious allegiances in the provision of goods and services, housing and other areas.

However, the socio-economic and civil society dimension of integration mainly rests on the common EU membership of Ireland and the UK, which enabled socio-economic and civic transaction without frictions on the island of Ireland as well as with Britain. EU law, directly applicable in both states, and enforced by national courts and the ECJ, guarantees among others free trade in goods and services, the freedom of business to establish and the free movement of workers as well as EU citizenship rights for non-economically active persons. EU legislation ensures regulatory harmonisation necessary for the smooth operation of this. Both have been central to achieving a degree of normalisation accompanying the peace process, one expression of which is that citizens from other EU Member States have made the island of Ireland their home, as well as coming here to live, work or study for limited periods. The economy relies on EU workers from beyond the UK or Ireland, as well as on service provision from other parts of the EU. Does the position paper address these conundrums?

Its second part (paragraphs 18-33) is focused on the Common Travel Area (CTA), correctly stating that this is a form of cooperation for the benefit of UK and Irish citizens, allowing them the right to enter, reside, work and study in each other’s’ state, while also accessing some social welfare entitlements and health services. The CTA also includes specific measures for securing its external borders, and it lacks any one document setting out all the principles and details, including enforcement mechanisms. The UK negotiation position focuses on the preservation of rights to move by Irish and UK citizens. However, the UK government states that border and immigration controls for EEA nationals can only be addressed as part of the future relationship with the EU, while stressing that immigration controls are not restricted to border controls, but can also be operated as controls of access to labour market and social security at other points.

The 3rd part of the paper (paragraphs 34-57) addresses the customs border. Again, the UK government proposes to omit implementing border posts, and to conduct all necessary controls of customs, compliance with agricultural product codes (sanitary and phytosanitary measures) through other controls. It assumes its separate proposals on customs are sufficient to control the movement of goods. These proposals have been criticised for lack of practicability elsewhere already: they either refuse any practical control of what will be a customs border, or shift the burden of those controls onto business, who will need to ensure compliance with EU standards by robust mechanisms which do not come for free.

Again, what is missing in part 2 and 3? The paper acknowledges that it does not touch the service sector, and relegates this aspect to the deep and special future partnership (paragraph 35) to be negotiated after the withdrawal agreement has been concluded. Further, both sections are pre-occupied with borders, the land border between the UK and Ireland, which meanders at a length of more than 300 miles through the island of Ireland, as well as the sea border between Britain and the island of Ireland. Given the traumatic experiences of border communities during the “troubles”, this pre-occupation is understandable. However, maintaining the degree of normality achieved in Northern Ireland and on the island of Ireland as a whole would require a different focus, a focus on cooperation and integration in socio-economic and civic respects. Any commitment to achieve this still has to be formulated.

As regards persons, the UK government has not (yet) committed to maintaining the pre-conditions for free movement of persons (including those who are not UK or Irish citizens born in Northern Ireland or Ireland), and thus to the preservation of an important element of an all-island integration. It envisages post-border controls being maintained, possibly modelled on the UK’s 2016 Immigration Act, which makes employers, landlords, universities and schools (criminally) liable for maintaining restrictions of immigrants on participation in socio-economic life. This replacement of controls at borders by civic controls is meant to disrupt socio-economic integration.

As regards the borders for products, the UK stresses that the final shape of the customs border depends on the future customs relationship. Thus, solutions for problems for Northern Ireland and Ireland caused by Brexit is postponed to a later stage in the negotiations, after the conclusion of the withdrawal agreement. An exception is made for energy products, as maintaining the common energy market is viewed as pivotal. Not even a membership of Northern Ireland in the EEA (which would not address the customs border) has been considered.

Clearly, this is a first draft for the points in the withdrawal agreement that need to be addressed to avoid disproportionate damage to Ireland and Northern Ireland in the withdrawal process. If (as at least one political party supporting the Westminster government has stated in their election programme), the free movement of goods, services and persons should be maintained on the island of Ireland, a more committed position seems necessary. Since the EU Commission and the EU 27 are dedicated to achieving a solution for the rights of EU citizens as well as for the problems of Ireland and Northern Ireland, there is hope that more constructive solutions are yet achieved.