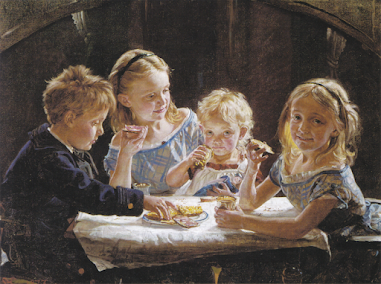 In today's world, our privacy and personal data are controlled by Big Tech companies such as Facebook, Google, Twitter, Apple, Instagram and many others. They  know  almost everything about us— our location, addresses, phone numbers, private email conversations and messages, food preferences, financial conditions and many other intimate details that we would otherwise not divulge even to our close friends. Children are not immune from this overarching surveillance power of Big Tech companies.  In the UK, children as young as 13 years old can give their consent to processing of their personal data including using some kind of Facial Recognition Technology (FRT) by these Big Tech companies that provide online services. Many of these companies likely know our children's preferences for movies, music, food and other details more than we do. But society has no meaningful way to influence these companies whose God-like presence in our lives epitomizes the dystopia of technology-driven world.  Surveillance is the rule than the exception and we have little tools to protect ourselves from pervasive privacy intrusion.

But the advent of FRT in schools in Europe has alarmed citizens, advocacy groups, Data Protection Authorities (DPAs) far more than the pervasive presence of Big Tech companies in our lives. It has prompted a strong response from DPAs who have consistently blocked the deployment of the technology in schools on the grounds of privacy intrusion and the breach of the GDPR.

Facial recognition is a process by which a person can be identified or recognized by Artificial Intelligence (AI) software using their facial image or video.  The software compares the individual’s digital image or video captured by a camera to an existing biometric image to estimate the degree of similarity between two facial templates to identify a match. There have been multiple instances of use of this technology in schools — for attendance monitoring in Sweden, access control in France and taking payment in canteens in the UK.  According to Swedish Municipal School Board, monitoring attendance using FRT would save 17280 hours  per year at the school concerned. UK Schools wanted to reduce a queue in canteen by taking payment faster and safer.  But DPAs, and in case of France, the Administrative Court of Marseille stepped in to block the technology due, primarily, to privacy related concerns regardless of the appreciable benefits.

While the school authorities relied on explicit consent of students and/or their legal representatives to use the technology, DPAs rejected that explicit consent is a valid ground for processing personal data using FRT due to the imbalance of power between the school authorities on the one hand and students and their guardians on the other. This raises a question whether public institutions including schools could ever use FRT with the explicit consent of the data subject and if not, whether that is an outcome society should aim for.

The Concerns about FRTs in Schools and the Fix

Scholars and advocacy groups point out that FRTs poses certain risks, especially in the context of processing children's data ranging from misuse of biometric data by the companies involved in providing or using the technology as well as bad actors such as hackers to the normalization of surveillance culture, directly stemming from individuals giving up their privacy right. More generally, it is argued that FRT is “an unnecessary and disproportionate interference with the students’ right to privacy.” As such, DPAs call for the deployment of less privacy intrusive technology alterative and take strict approach in whether there is a valid legal basis for using the technology including a freely obtained consent.

In its 2019 decision to fine the secondary school board of  Skellefteå Municipality, the Swedish DPA argued that although FRT was employed to monitor student attendance based on explicit consent, consent cannot be a valid legal basis given the clear imbalance of power between the data subject and the controller. In France, the Administrative Court of Marseille in agreeing with the French DPA(CNIL), concluded that the school councils have not provided sufficient guarantees to obtain free and informed consent of students to use FRT to control access, despite the fact that specific written consent has been obtained. In October 2021 as nine schools in North Ayrshire (UK) were preparing to replace their method of taking payment in canteens from fingerprint to facial recognition, the Information Commissioner’s Office(ICO) wrote a letter urging the schools to use  a "less intrusive" tool. The School Councils were forced to pause rolling out the technology.  The content of the ICO’s letter is not public and the ICO has not responded to the author’s Freedom of Information (FOI) Request to access the letter.

But these decisions evidently suggest that the mere presence of a power relationship between data controller and the data subject renders explicit consent as the basis for processing biometric data invalid. The UK schools’ suspension of implementing FRT for the mere fact of receiving a letter from the ICO signals that the presumed power imbalance alone would defeat explicit consent — at the very least, schools are not willing to engage in the process of obtaining consents as that would likely be regarded as insufficient and entail sanctions for the breach of the GDPR.

While documents obtained from North Ayrshire Council under FOR request do suggest there were flaws in obtaining consent (for instance attempting to obtain consent  directly from a child of 12 years old), the overall effort of the Council seemed reasonable in terms of complying with data protection law. If the Council wishes to obtain valid consent, it should not be effectively prohibited ex ante. But the ICO’s letter clearly had that effect. Subsequently, on November 4, 2021, the House Lords held a debate sponsored by Lord Clement-Jones who expressed his opposition to the use of FRT in schools stating that “we should not use children as guinea pigs.” There is overwhelming evidence of the pressure to categorically ban the use of FRT in schools and indeed it is now effectively banned in Europe, albeit there is no legislation to that effect.

Imbalance of Power under the GDPR

Where there is a power relationship, it is challenging to prove that consent has been obtained freely – the requirement which DPAs concluded was not met in Sweden and France. In this regard, the GDPR makes it clear that “consent should not provide a valid legal ground for the processing of personal data in a specific case where there is a clear imbalance between the data subject and the controller, in particular where the controller is a public authority and it is therefore unlikely that consent was freely given in all the circumstances of that specific situation.”

The GDPR allows DPAs and courts to consider an imbalance of power in assessing whether the consent has been obtained freely. But this is not a blanket prohibition of using explicit consent to process personal data by public authorities. This is consistent with the European Data Protection Board’s Guideline which states that “Without prejudice to these general considerations, the use of consent as a lawful basis for data processing by public authorities is not totally excluded under the legal framework of the GDPR.” Regulators and courts can, ex post facto, scrutinize if the explicit consent was obtained freely and in an informed manner but have no power to invalidate validly given consent based on the mere existence of imbalance of power that did not have actual effect. If a Member State of the European Union wishes to exclude consent as a basis for processing special categories of personal data, the GDPR allows such Member State to legislate that the prohibition of the processing of special categories of personal data may not be lifted based on explicit consent under any circumstance. Absent such legislation, the validity of consent in the context of the existence of power relationship can only be examined on case-by-case basis rather than in categorical terms. Thus, schools should be able to demonstrate that the presumed imbalance of power has not played a role in obtaining consent.

The Current Approach should be Reexamined

The concerns raised by scholars and privacy advocates about the intrusive nature of FRT should be seen in the light of data protection and privacy safeguards provided by the GDPR which has a series of provisions guaranteeing that personal data is not used for a purpose different than originally intended, and that personal data be kept confidentially and securely. Furthermore, data controllers and processor have no right to share personal data with third parties unless consented to by the data subject. In the presence of these and a number of other safeguards, what seems a blanket prohibition of the use FRT in schools on the basis of unreasonable privacy anxiety and an irrebuttable presumption that power imbalance per se leads to a vitiated consent is not sensible.  There are several reasons this approach needs to be reexamined.

First and foremost, it puts small companies and public institutions at a disadvantage with regard to the use of FRT.  Big Tech companies can do almost as they please with our or our children’s personal data. Facebook’s opaque data sharing practice has frequently been exposed, but there is still no meaningful way to control what Facebook does. The same is true other Big Tech companies in the business of monetizing our personal data. Schools and companies providing FRTs should be the least of our concern. It is not difficult to make them abide by the GDPR, whereas Big Tech companies can hide behind complex legal and technical black boxes to get away with grossly illegal use of our personal data. The blanket prohibition of using FRTs by small institutions creates a system that unfairly disadvantages small data controllers.

Furthermore, data innovation would be deterred by over-zealous DPAs and courts who see superficial power imbalance without examining how it plays in reality while the real power imbalance society suffers from vis-à-vis Big Tech companies remain inadequately challenged.   The future depends on innovating with data and the use of FRT would be an essential component of it. To satisfy our excessive anxiety about privacy intrusion, we cannot prevent small companies and institutions from benefiting from AI technologies and data-driven innovation while we let Big Tech companies take control of our lives. Data innovation should be by all, for all, not just for the Big Tech.