The Calais crisis: which Member State is responsible? 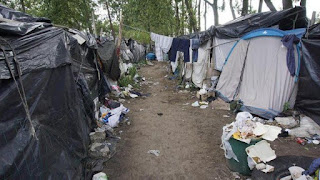 Several thousand migrants are living in poor conditions near Calais, many apparently intent on making it to the UK. Their attempts to find passage via the Eurotunnel are severely delaying travel on both sides of the border. Which country is responsible for them: the UK or France?

At the outset, we should note that this is in a way a clash between two different types of movement within the EU. On the one hand, we have the free movement that the EU specifically tries to encourage: the free movement of goods in the lorries, persons in the trains, and transport services in either context. On the other hand, we have what the EU calls ‘secondary’ movements of (potential) asylum-seekers, which it specifically tries to discourage. EU internal market law is adopted to facilitate the first type of movement, while EU asylum law is harmonised to reduce the incentive for the second type.

Of course, the migrants don’t actually want to shut EU free movement down, since that would defeat their whole purpose. They merely want the lorries to slow down long enough to stow away on board, then continue on their journey – in effect bringing the two types of movement together. It’s the government attempts to prevent this that leads to near-gridlock.

But which of those governments is responsible? Let’s examine the issue first from the migrants’ perspective, and then from the free movement perspective. (While some consider the word ‘migrant’ offensive, I will continue to use it. In my view, it simply refers to a category of people, like teachers or nurses. It would make sense to refer to them as ‘asylum-seekers’ or ‘refugees’ only if it were clearly the case that almost all of them had applied for asylum or qualify as refugees; the available information doesn’t indicate this clearly enough. The word ‘migrant’ doesn’t deny their humanity; it simply explains their situation.)

Some of the migrants have applied for asylum in France, and so their position is governed by EU asylum law. This includes the Dublin Regulation, which determines which Member State is responsible for their application. That may not be France, but rather the Member State which they first entered – if France can prove that they entered there. If France cannot prove that another Member State is responsible, then it must assume responsibility. The UK would only be responsible for their applications if they have close family members in the UK, living there as refugees or asylum-seekers.

What does that mean in practice? The Directive requires the Member State where the asylum seekers are present to ensure basic standards as regards welfare and accommodation, among other things. It appears from press reports that these standards are not respected as regards the migrants near Calais.

Furthermore, the latest EU Directive on asylum procedures, which applied from last week, sets deadlines to deal with asylum claims. That part of the Directive doesn’t apply until 2018, but it could be argued in the meantime that the principle of effectiveness of EU law (which the CJEU has frequently applied in immigration law cases) requires asylum claims to be dealt with efficiently, not just ignored.  As for the substance of asylum law, some press reports suggest that France gives asylum to Eritreans much less often than the UK (and much of the rest of the EU). This may be due to a flawed application of the EU’s Qualification Directive. If this is not being fixed in the French courts by an asylum-seeker’s appeal or a judicial review by NGOs, then the Commission should identify the specific error in interpretation of the law and bring infringement proceedings against France.

But not all of those migrants have applied for asylum. For those people, since it seems unlikely that any of them are legal migrants, this must mean that they are irregular migrants. Their position in France is therefore governed by the EU’s Returns Directive, which specifies that the Member States must issue irregular migrants with a return order and try to enforce their expulsion to a country of origin or transit as soon as possible. The EU Court recently ruled that Member States could not simply issue irregular migrants with a fine and make no effort to remove them. It must equally follow that Member States cannot turn a blind eye to their existence, when (as in the Calais case) a large number of them are openly staying on Member States’ territory.

The Returns Directive does not create an absolute obligation to remove irregular migrants. First of all, a Member State can choose to regularise their position at any time. Secondly, if they apply for asylum, EU asylum law applies, until the end of the asylum process, when they are either recognised as needing protection or their application fails its final appeal. In the latter case, the Returns Directive then applies again. Thirdly, it may prove impossible in practice to remove them to their State of origin or transit, because there is not enough proof of where they come from.  In that case, they remain in a kind of limbo, unless the State chooses to regularise them. Irregular migrants are entitled to emergency health care and essential treatment of illness during their stay. As far as we can tell from press reports, it does not appear that the French authorities are making any active effort to return the irregular migrants in Calais to their countries of origin or transit pursuant to the Directive.

The CJEU has ruled, in a case involving France, that Member States have a responsibility to prevent free movement of goods being disrupted by private individuals. While States have a margin of discretion exactly how to deal with that private behaviour, it is not unlimited. In that case, farmers’ groups had been vandalising lorries full of other Member States’ produce for years on a regular basis, and many of the perpetrators were known to the police. France was therefore liable for doing nothing very effective to stop this. It was compensating the victims, but this was not enough.

On the other hand, in the case of Schmidberger, Austria was not liable for allowing a disruption to trade by private protesters who briefly blocked a transit route. According to the CJEU, the protesters’ right to demonstrate overrode the free movement of goods, given that the disruption didn’t last very long.

What about industrial action? This is also a separate source of the current restrictions on movement between the UK and France. On this point, the CJEU has been quite critical of trade union action that restricts free movement: in the controversial cases of Viking Line and Laval, it ruled that while EU law recognized trade unions’ right to strike and take other collective action, these rights were easily overruled by EU free movement rules. But those cases concerned the freedom of establishment and free movement of services; the current strikes in France affect the free movement of goods. An EU Regulation adopted after the earlier French case states that while States have an obligation to deal with private disruptions to the movement of goods, this is without prejudice to the right to strike.

Applying these cases to the current problems at the UK/France border, it’s not clear whether the disruptions caused by strikes are an unjustifiable restriction on free movement.  The strikes seem only to concern pay and conditions, whereas in Laval and Viking Line, while the disputes were also indirectly about pay and conditions, they were mainly directed at shutting down free movement due to perceived ‘social dumping’.

What about the disruptions linked to the migrants’ attempts to travel to the UK?  While EU law does recognize a right to asylum, it’s possible to apply for that right in any Member State, and so it is not necessary to travel to the UK to that end. The number of migrants would surely be reduced if France applied its obligations to: process asylum applications; decide on Eritrean claims correctly; and remove irregular migrants who had not applied for asylum. France must also extend basic standards of welfare and housing to asylum-seekers, whether that acts as a 'pull' factor or not.

Is the UK liable in any way? The UK does exercise border controls on French territory, pursuant to a treaty between the two countries on ‘juxtaposed controls’, agreed in the context of the Channel Tunnel. But the UK’s obligations under that treaty do not extend to admitting asylum-seekers or other irregular migrants who want to use the tunnel to travel to the UK. More broadly, the UK’s border checks in France don’t turn any part of France into British territory, just as the reciprocal French border checks in the UK don’t turn any bits of Kent French, or transfer St. Pancras station to the Paris metro system.

So France is responsible for the impact on free movement, due to its separate breaches of EU immigration and asylum law. This shouldn’t be seen as a selfish or parochial conclusion; after all, it’s not really radical to say that States are generally responsible for what happens on their territory. That’s the normal rule of public international law, and it’s linked to the basic principle of State sovereignty. The EU rules in this case reflect that principle.

Having said that, allocating responsibility does not as such solve the problem. It would be open to the French government to denounce the treaty on juxtaposed controls, with a negative impact on the UK. So it makes sense for the UK government to offer a contribution to solve the problem, even if it is not obliged to do so. The government has already accepted this principle, paying for the construction of a security fence. And it would equally make sense to make a contribution as regards immigration issues, for instance the costs of removal or basic support, linked to a requirement to move to other parts of France to receive that support.