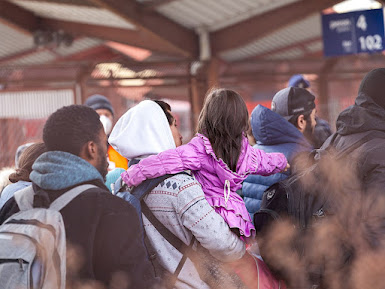 As the number of refugees fleeing Ukraine nears two million, we and our members on the ground have been mobilising to try to get a handle on the particular protection needs of stateless people forcibly displaced by the crisis.

We know from past experience, including research under our Stateless Journeys initiative, that stateless people fleeing conflict typically face additional issues and challenges crossing borders and accessing protection. We also know that statelessness is both a cause and a consequence of forced displacement.

Upon hearing anecdotal reports of difficulties experienced by stateless people trying to escape the war in Ukraine, we wanted to better understand the situation as quickly as possible. This week we have published an initial briefing to help inform refugee response actors on the ground so that problems can hopefully be anticipated and addressed before they become entrenched.

The last census in Ukraine in 2001 recorded 82,550 stateless people, and UNHCR estimated there to be 35,875stateless and people with ‘undetermined nationality’ in 2021. Other sources suggest there could be many tens of thousands more including a significant proportion of the Roma population as well as children born in Crimea, Luhansk and Donetsk since 2014. The World Bank recently estimated there to be 999,000 people aged over 15 in Ukraine without a national ID card. Although not all of these individuals will be stateless, many will be at increased risk of becoming so if the crisis becomes more protracted.

It is estimated that 10-20% of Romani people in Ukraine lack the civil documentation needed to acquire or confirm their Ukrainian citizenship. Other profiles of stateless people include former citizens of the USSR who were unable to demonstrate permanent residence in Ukraine in 1991 and so could not acquire Ukrainian nationality. Some, who have been unable to acquire any nationality, have since passed their statelessness on to their children. People living in non-Government controlled areas, Crimea, and those internally displaced in Ukraine have faced significant barriers to obtaining or renewing personal documents since 2014, leaving an estimated 60,000 children born in these areas without birth certificates and at risk of statelessness.

In addition to these significant in-situ stateless populations, there are asylum-seekers, refugees, and migrants (and their children) who were residing in Ukraine and were stateless before leaving their countries of origin (e.g., Palestinians, Kuwaiti Bidoon, Kurds); or who may have since become stateless due to displacement, discrimination or gaps in nationality laws, State succession, or deprivation of nationality practices.

In May 2021, Ukraine introduced a statelessness determination procedure to determine who is stateless on its territory and grant protection to stateless people, but this only recently became operational, and by 31 December 2021 only 55 people had been granted a temporary residence permit through the procedure. The vast majority of stateless people living in Ukraine will lack any documentation proving that they are stateless. This not only poses insurmountable barriers for stateless people trying to move within Ukraine given current circumstances, but also significantly impacts on their ability to move to relative safety within the country, cross borders, and access protection.

The initial response of Ukraine’s western neighbours has been generous, with both government actors and civil society doing their utmost to welcome and receive unprecedented numbers of refugees. Hungary, Slovakia, Poland, Romania, and Moldova have all stated that they are currently admitting everyone fleeing the war in Ukraine, including stateless people, those at risk of statelessness and/or undocumented people. A brief summary of policies in each of these countries is available in our briefing.

However, the picture is fast-moving and there is a need for vigilant monitoring given emerging evidence of inconsistent practices and racial profiling at different border crossings (e.g., in Hungary and Poland) with non-Ukrainians facing barriers to accessing the territory, or additional ‘secondary screening’ procedures, including in detention-like conditions in Poland.

Equally, early information from ENS members suggests that stateless people and those at risk of statelessness fleeing Ukraine are likely to face additional barriers and differential treatment depending on their residence, nationality, and/or documentation status. More time and further research are needed to understand the detailed picture in terms of how different profiles of stateless people are likely to be affected.

A big question mark about the level of protection likely to be available to stateless refugees from Ukraine centres around how the EU Temporary Protection Directive (TPD) will be applied by different countries.

The Directive, invoked by EU Member States on March 4, grants immediate protection in the EU (other than Denmark) to Ukrainian nationals and those who had international protection in Ukraine prior to 24 February 2022. Stateless persons who can prove they held a permanent residence permit in Ukraine before 24 February and ‘cannot safely return to their country or region of origin’, are also entitled to temporary protection, but Member States can choose whether to apply the TPD or ‘adequate protection under national law’. Member States may also extend temporary protection to others, including stateless persons who were ‘residing legally’ in Ukraine. People granted temporary protection are entitled to a residence permit (initially for one year, extendable up to three years unless safe return is possible), access to the labour market, housing, social welfare, medical care, and access to education for children.

EU Member States are not currently required under EU law to extend temporary protection to most stateless people and those at risk of statelessness who are/were living in Ukraine. People without proof of permanent residence or international protection in Ukraine may need to apply for asylum or another form of protection according to the laws of their host country. This could pose serious issues in terms of their access to rights and services and their ability to obtain protection, if denied access to asylum procedures (e.g. as is the case in Hungary), or, for example, if Ukraine was disputed as their country of origin. So, even if able to escape Ukraine, stateless people are at particular risk of subsequently finding themselves excluded or left in limbo, and, in some cases, also at risk of arbitrary detention.

Our briefing makes a series of recommendations to the EU, European States, international agencies and NGOs to ensure that stateless people from Ukraine can access protection in line with international law.

First and foremost, EU Member States should use their discretion under the TPD to extend temporary protection to all stateless persons and those at risk of statelessness regardless of prior residence status in Ukraine, or at least ensure access to equivalent forms of protection under national law. Linked to this, it is critical that lack of identity documents or other documentation does not prevent stateless people and people at risk of statelessness from accessing international protection or other forms of protection under national law.

Where access to temporary protection is not available, European States should ensure routes to protection and rights for stateless people on their territory in line with their obligations under the 1954 Statelessness Convention, as well as implement safeguards to prevent arbitrary detention.

Critical to this, will be enhancing the ability of border officials and refugee response actors to properly identify statelessness and risk of statelessness among those displaced from Ukraine so as to ensure their access to protection, including legal advice and other services. There is an urgent need to improve the availability of disaggregated data, using standardised guidelines and assessment tools at registration points, in protection procedures, and during legal counselling.

Training will also be key, and here there is a role for several actors, including UNHCR, the EU Asylum Agency, and NGOs and civil society experts. The EU Asylum Agency recently published a Registration Tool that has a section on identifying statelessness, which could be useful in this context. We are also in the process of developing a more extensive statelessness identification tool, which we will make available to all actors in the next few months.

Finally, reports on the ground suggest an important need for refugee response actors to identify and monitor statelessness and risk of statelessness among unaccompanied and separated children, as well as children born in transit and host countries, to ensure their right to a birth certificate, legal identity, and nationality is guaranteed. This is likely to become even more acute if the conflict and related displacement becomes more protracted. UNICEF and other child rights organisations will have a key role to play in this regard.

Next steps and looking beyond the conflict

Over the coming weeks and months, we will continue to monitor the situation, as well as seek to update and expand the scope of information available, including to understand how the Temporary Protection Directive is being implemented for stateless refugees displaced further across Europe. We will also explore other ways to support our members working tirelessly on the ground, including by trying to engage the donor community to support their efforts and to fund targeted assistance for stateless people who otherwise find themselves excluded from Europe’s refugee response.

Equally, there is still a lot we do not know about the situation facing stateless people inside Ukraine. We know from our Ukrainian member organisations working bravely and tirelessly inside the country that stateless people without documentation are unable to move internally or across checkpoints, so find themselves trapped. There have also been disturbing reports of racial discrimination, antigypsyism, and/or differential treatment based on documentation status at Ukrainian borders, which may be preventing some stateless/people at risk of statelessness from leaving Ukraine. More research is needed to better understand and try to address this situation.

Finally, if we allow ourselves to try to be optimistic in looking beyond this unspeakably awful conflict, there will be a critical need to address legal identity, documentation, and nationality issues as part of re-building efforts. The current situation is a sobering reminder of how stateless people routinely suffer from being forgotten and their needs ignored, especially in times of conflict. We cannot allow this to happen, and we and our members stand ready to work with all actors to guard against this.