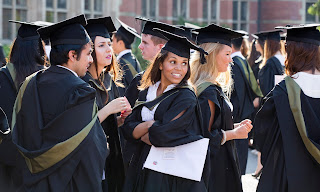 If British voters decide to Leave the EU in the upcoming referendum, how would that affect young people? I’ll look at that from three perspectives: education, travel and the economy.

The EU doesn’t regulate the content of education, or issues like tuition fees. These limits on the EU’s role are set out in Article 165 of the Treaty on the Functioning of the EU:

The Union shall contribute to the development of quality education by encouraging cooperation between Member States and, if necessary, by supporting and supplementing their action, while fully respecting the responsibility of the Member States for the content of teaching and the organisation of education systems and their cultural and linguistic diversity.

So tuition fees differ across the EU – just as they do within the UK. Instead, the EU is involved in the cross-border aspects of education. Article 165 goes on to list these, including:

– encouraging mobility of students and teachers, by encouraging inter alia, the academic recognition of diplomas and periods of study,
– encouraging the development of youth exchanges…

Could the UK still participate in the Erasmus programme after Brexit? The current EU law (see Article 24) lists the five categories of countries which participate: a) EU Member States; b) Norway, Iceland and Liechtenstein, on the basis of a free movement treaty; c) Switzerland; d) countries applying to join the EU; and e) neighbourhood countries, like Ukraine.

Also, some of the non-EU countries don’t fully participate in Erasmus: only Norway, Iceland and Liechtenstein, along with Turkey and Macedonia, are full participants (‘programme countries’). The others are ‘partner countries’, who have only ‘limited access’ to the student exchanges (see page 34 of the Erasmus Programme Guide). Similarly, 75% of the money for youth and volunteer exchanges is spent on the programme countries (see page 75 of the guide).

So could the UK become a programme country after Brexit, to retain full participation in Erasmus? It wouldn’t be a current or candidate Member State. It wouldn’t be a ‘neighbourhood country’ either: that term applies to the countries on the EU’s eastern and southern borders (the purple and darker yellow states on this map): 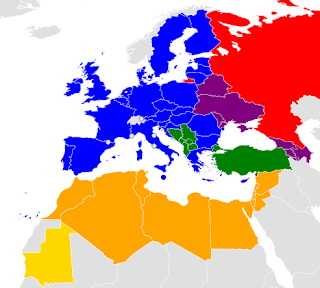 So currently, full participation in Erasmus extends only to countries which have applied to join the EU or which have a free movement agreement with it. The official position of the Vote Leave side is that the UK should not participate in the free movement of people or the single market (ie the ‘Norway option’) after Brexit. Therefore the UK will not qualify for full participation in Erasmus. The EU could agree to change the rules – but there are no guarantees of that. Moreover, the example of Switzerland suggests that it won’t.

A Brexit would have other impacts on British students who want to study in the EU – whether they participate in Erasmus or not. First of all, the EU rule that students pay the same tuition fees as locals – which enables British students to pay the same low fees as most local students in EU universities – would no longer apply. (Even under the ‘Norway option’, this rule doesn’t apply). UK students in EU universities would therefore pay foreign fees, unless the UK government was able to negotiate reciprocal deals with each country to avoid this.

Thirdly, it will be more difficult for students to move to an EU country for more than three months.  (Again, this assumes that – as Vote Leave says – the UK would not still sign up to the free movement of persons). The EU has rules on the admission of non-EU students (the UK, Ireland and Denmark have an opt-out), which were recently amended (see discussion here). They will not simply be able to jump on a plane to move to another Member State, but will have to apply for a residence permit up to three months in advance and pay a fee for that application. If they wish to stay after study there may be complications – to which we now turn.
Travel

Many young people are used to travelling to Amsterdam or Barcelona for the weekend. Most likely such short-term trips will be equally easy to make after Brexit, because as long as the UK does not impose a need to get a short-term visa (for visits of less than three months) on any EU countries, the EU will not demand that British citizens will need a visa to travel to the EU. That’s the EU policy of visa reciprocity. (Note that Ireland, like the UK, has opted out of this policy, so trips to Ireland shouldn’t be affected by Brexit).

However, there is some risk that weekend visits or longer holidays will be disrupted. A prominent Vote Leave campaigner, the justice minister Dominic Raab, has suggested that the UK should impose a visa requirement on EU citizens after Brexit, and accepted that this will mean that UK citizens would be subject to visa requirements to visit the EU. That’s because the EU visa reciprocity policy works both ways.

What would this visa requirement mean in practical terms? I have discussed the impact in detail here, but I’ll summarise the main points again. The EU rules on short-term visas for non-EU citizens are set out in a ‘visa code’, so we know exactly what would happen.

There would be a €60 application fee for every individual over 18, for every visit. Usually there would be an additional fee to pay to a private service provider to handle the documents. Visits to the EU couldn’t be very spontaneous, since applicants would have to wait several days for their visa to be approved. Without the visa stamped in their passports, airlines and ferry companies wouldn’t allow them to travel. Not everyone would get a visa either: young people who haven’t got a job yet are more likely to be turned down. Any refusal of a visa application would be recorded on an EU-wide database for several years, increasing the chance of further refusals.

What about stays of longer than three months? Unless the UK agrees to continue with the free movement of people to and from the EU, any young (or indeed not-so-young) people wishing to stay for longer than three months in an EU country to work or study, or to join a family member, will no longer have the right to do so after Brexit. Instead, they will be subject to far more restrictive national immigration laws (partly harmonised by the EU), as discussed in detail here.

How could Brexit affect young Britons’ economic prospects? Economic forecasts of the effect of Brexit aren’t certainties. The negative predictions about leaving the EU made by many economists and international institutions could turn out to be wholly incorrect, or at least overstated.

But in Martin Lewis’ objective assessment, there are more economic risks to a Leave vote. And even the pro-Brexit economist Andrew Lilico predicts that there will be a negative economic effect to Brexit in the short-term, with a positive impact starting in 2030: 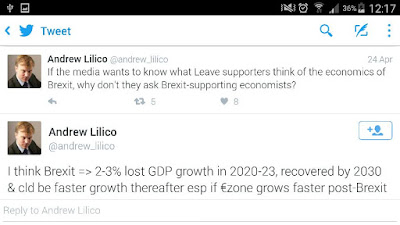 If this forecast is correct, less economic growth means fewer jobs. And young people looking for work after school or graduation are looking for their first job now, or in the next few years – not in 2030. Indeed, one economic analysis predicts that younger people would face the biggest negative impact on the job market.

Nigel Farage recently said he was ‘shocked’ that British students would want to study in the EU – referring to the rest of the world instead. But it’s possible to want to visit Rome as well as Rio, or study in Madrid instead of Mumbai.

We can’t be certain of the impact of Brexit upon young people in advance. But the evidence suggests that access to the Erasmus scheme may be under threat. And it will certainly be harder to move to an EU country for any reason if the UK is no longer participating in the free movement of persons – as Farage and the official Vote Leave camp suggest. Moreover, if there are negative economic effects, at least in the short-term, that would affect every young person in the UK looking for work in the next few years.

Photo credit: The Guardian
Posted by Steve Peers at 07:03