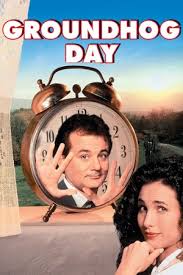 Love it, hate it, or spend an academic career analysing it, the USA is the best-known country in the world. Yet some of its traditions still puzzle outsiders. One of them, celebrated yesterday, is ‘Groundhog Day’: the myth that the appearance, or non-appearance, of the shadow of an otherwise obscure rodent on February 2nd each year will determine whether or not there will be another six weeks of winter. Outside the USA, Groundhog Day is probably better known as a movie: grumpy Bill Murray keeps repeating the same day, trying to perfect it and woo the lovely Andie MacDowell. Others have borrowed this basic plot. In Edge of Tomorrow, sleazy Tom Cruise keeps repeating the same day, trying to kill aliens and woo the lovely Emily Blunt. In the Doctor Who episode Hell Bent, angry Peter Capaldi keeps repeating the same day, trying to cut through a diamond wall and resurrect the lovely Jenna Coleman.

The basic idea is summed up in the advertising slogan for Edge of Tomorrow: Live. Die. Repeat. Groundhog Day in particular has attracted many interpretations. Of these, the most convincing is that the film’s story is a Buddhist parable: repeated reincarnation until we reach the state of enlightenment, or nirvana.

How does this relate to the new EU/US privacy deal, dubbed ‘Privacy Shield’? Obviously the deal involves the USA, and it was reached yesterday, on Groundhog Day. And it’s a new incarnation of a prior deal: ‘Safe Harbor’, killed last October by the CJEU in the Schrems judgment (discussed here). While the text of the new agreement is not yet available, the initial indication is that it is bound to be killed in turn – unless the CJEU, admittedly an increasingly fickle judicial deity, is willing to go back on its own case law. Goodness knows how many further reincarnations will be necessary before the US and EU can reach enlightenment.

Problems with the deal

The point of the new deal is the same as the old one: to provide a legally secure set of rules for EU/US data transfers, for companies that subscribe to a set of data protection principles. Failing that, it is possible to argue that transfers can be justified by binding corporate rules, by individual consent or (as regards US government access to the data) by a third State’s public interest. But as I as I noted in my blog post on Schrems, these alternatives are untested yet in the CJEU, and are possibly subject to legal challenges of their own. Understandably, businesses would like to make a smooth transition to a new set of legally secure rules. Does the new deal fit the bill?

In the absence of a text, I can’t analyse the new deal much. But here are my first impressions.

According to the CJEU, the main problems with the previous deal were twofold: the extent of mass surveillance in the USA, and the limited judicial redress available to EU citizens as regards such government surveillance. It appears that the new agreement will address the latter issue, but not the former. There will be an ‘ombudsman’ empowered to consider complaints against the US government. While the details are unknown, it’s hard to see how this new institution could address the CJEU’s concerns completely, unless it is given the judicial power to order the blocking and erasure of data, for instance.

Furthermore, there’s no sign that the underlying mass surveillance will be changed. Here, the argument is that the Court of Justice simply misunderstood the US system, or that in any event many EU countries are just as wicked as the USA when it comes to mass surveillance. These arguments are eloquently set out in a barrister’s opinion, summarised in this (paywalled) Financial Times story.

Facebook and the US government disdained to get involved in the Schrems case, and have no doubt repented this at leisure. The assumption here appears to be that they would participate fully in new litigation, and convince the CJEU to see the error of its ways.

How likely is this? It’s undoubtedly true to say that the CJEU gives an increasing impression that it willing to bend the rules, or double up on its own case law, in order to ensure the survival of an increasingly beleaguered EU project. In Pringle and Gauweiler, it agreed with harshly criticized plans to keep monetary union afloat. In Dano and Alimanovic, it qualified its prior case law on EU citizens’ access to benefits, in an attempt to quell growing public concern about this issue. In Celaj, it gave a first indication that it would row back on its case law limiting the detention of irregular migrants, perhaps in light of the migration and refugee crisis. The drafters of the proposed deal on UK renegotiation appear to assume that the Court would back away from even more free movement case law, if it appears necessary to keep the UK from leaving the European Union.

Once the Court reminded legal observers of Rome: the imperial author of uniform codes that would bind a whole continent, upon which the sun would never set. Now it increasingly reminds me of Dunkirk: the centre of a brave and hastily improvised retreat from impending apocalypse, scouring for a beach to fight its last stand. The Court used to straighten every road; now it cuts every corner.

Since the ‘Privacy Shield’ deal faces many litigious critics, it seems virtually certain to end up before the Court before long. Time will tell where the judgment on the deal will fit within the broader sweep of EU jurisprudence.