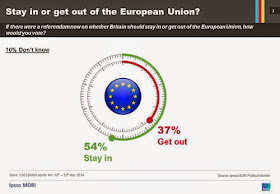 The Prime Minister, lacking a majority in the House of Commons, is harried by his Eurosceptic backbenchers. He promises a renegotiation of the UK’s membership of the EU, followed by a referendum on whether to stay in. It’s 2014 – but it’s also 1975.

That renegotiation and referendum ultimately resulted in a landslide vote in favour of staying in the EU. While the circumstances are different in some respects in 2014, there is a strong case for repeating this process.
The argument for a referendum on the EU has so far been made either by those who are opposed to the UK’s membership of it (UKIP), or as a concession to those backbenchers who are highly critical of it (the Conservative party). On the other hand, it has been resisted by those who are most in favour of the EU.
In that light, the purpose of this post is two-fold: (a) to make a pro-European case for a referendum and (b) to describe exactly how the UK should renegotiate its membership beforehand.

The pro-European case for a referendum

The case for a referendum on EU membership should stand on its own, and should not be seen as a defensive reaction to the results of the most recent European Parliament elections.

First and foremost, since 1975 there have been five major Treaty amendments, as well as substantial enlargement of the EU. The political and economic circumstances of the country, and the EU as a whole, have clearly changed. There is therefore a principled argument for allowing the voters to give their fresh consent (or not) for these developments.

Secondly, the continued pro-European rejection of a referendum has made it possible for critics of the EU to characterise pro-Europeans as anti-democratic. Of course, it can be argued in response that representative democracy is also a valid form of democracy, one with longer and deeper roots in British political culture, and that the UK Independence Party has never (at least to date) won a single seat in the House of Commons. But in light of the growing tradition to decide important constitutional questions by popular referendum, that counter-argument has diminishing force. After all, voters cast their vote at general elections for many reasons besides their view on membership of the EU.

While Labour and the Liberal Democrats have promised an in/out referendum, this would only take place in the event of a new Treaty transferring powers from the UK to the EU. While it is possible that there will be negotiations for Treaty amendments in the next few years, it is inconceivable that those parties would agree to the transfer of fresh powers from the UK to the EU in that context. So that referendum promise is meaningless. The Labour and Liberal Democrat position is like promising that if I had a sex change, I would stay married to my wife. But I’m not going to get a sex change.

In any event, the very offer of an in/out referendum, even  if the conditions for it to be held are unlikely ever to be satisfied, undermines the logic of the arguments against having such a referendum.

It must be emphasised that the case for a referendum is non-partisan: advocating a referendum does not necessarily mean supporting British withdrawal from the EU, or supporting any other policy espoused by the Conservative party.

So the pro-European response to calls for a referendum should no longer be to find an excuse not have one, to promise one and renege on that promise, or to promise one that will never be held.  It should be, simply: Bring it on.

Before examining the details of renegotiation, one critical rule must be set down at the outset. Any renegotiation position must avoid insisting upon Treaty amendment, or upon a change in EU law which necessarily involves Treaty amendment (such as complete UK control over the free movement of persons). That’s because a Treaty amendment will be far more difficult to achieve, in particular if it becomes bound up with other possible amendments to the Treaties concerning other issues. Those who demand that such renegotiation positions (such as full control over the free movement of persons) should be a ‘red line’ are essentially dishonest. If that issue is crucially important to them, they should instead call for UK withdrawal of the EU, with all of the consequences which that entails.

In fact, back in 1975, other Member States agreed to a renegotiation consisting of amendments to EU secondary legislation, and the British public ultimately accepted that deal. Again, it would be possible today to address many of the issues arising from the UK’s membership of the EU by amending secondary legislation. Indeed, Jean-Claude Piris recently argued that the negotiation demands set out by David Cameron could all be addressed by amendment of secondary EU legislation.

As discussed in a previous post, this is correct. However, there is a risk that the critics of the EU would not be entirely satisfied by it. The better strategy is therefore to aim for an intermediate course: in conjunction with amendments to EU secondary legislation, there should be a decision of the EU Heads of State and Government, meeting within the European Council, which constitutes the EU’s response to the renegotiation request.

Such Decisions have been adopted in the past, as regards Denmark and Ireland, in order to address the former Member State’s difficulties ratifying the Maastricht Treaty and the latter Member State’s difficulties ratifying the Treaty of Lisbon. In the latter case, the European Council also agreed the broader legal and political context of this decision: the decision was ‘legally binding’, it did not constitute a Treaty amendment, and its content would be set out in a Protocol to be attached to the Treaties in future. Indeed, the latter protocol was subsequently signed as promised. The UK could be offered a similar commitment.

In order to indicate more clearly how the renegotiation would work, the annex to this post suggest a possible wording for such a decision, based upon the 2009 Decision concerning Ireland, adapted to the Conservative party’s negotiating demands.

Having regard to the Conclusions of the European Council of [xx date] 2017,

Section A
Enlargement and the movement of persons

Section B
Free movement of persons and social benefits